This cemetery is maintained by the City of Bradenton. Access is overseen by Manatee Village Historical Park. To visit the Burying Ground, park at Manatee Village Historical Park and ask for the key in the gift shop. You can then walk through the museum grounds to cross 15th Street E. The Manatee Burying Ground is the oldest cemetery in Manatee County and is one of the oldest organized burying grounds on the Gulf Coast of Florida. Early settlers Mary and Josiah Gates deeded a portion of their land to the Manatee community for the burying ground on May 30, 1850. The cemetery was active for forty-two years, until 1892, when it closed to all but the immediate family members of those resting within its boundaries. The last burial occurred in 1962. There are approximately 94 graves that we can account for, though there are many more that are unmarked today. Because of this, we do not know how many people are buried in the cemetery grounds. Despite this, there are many notable names found here. These include founding members of the county and town, as well as veterans from the Seminole and Civil Wars. 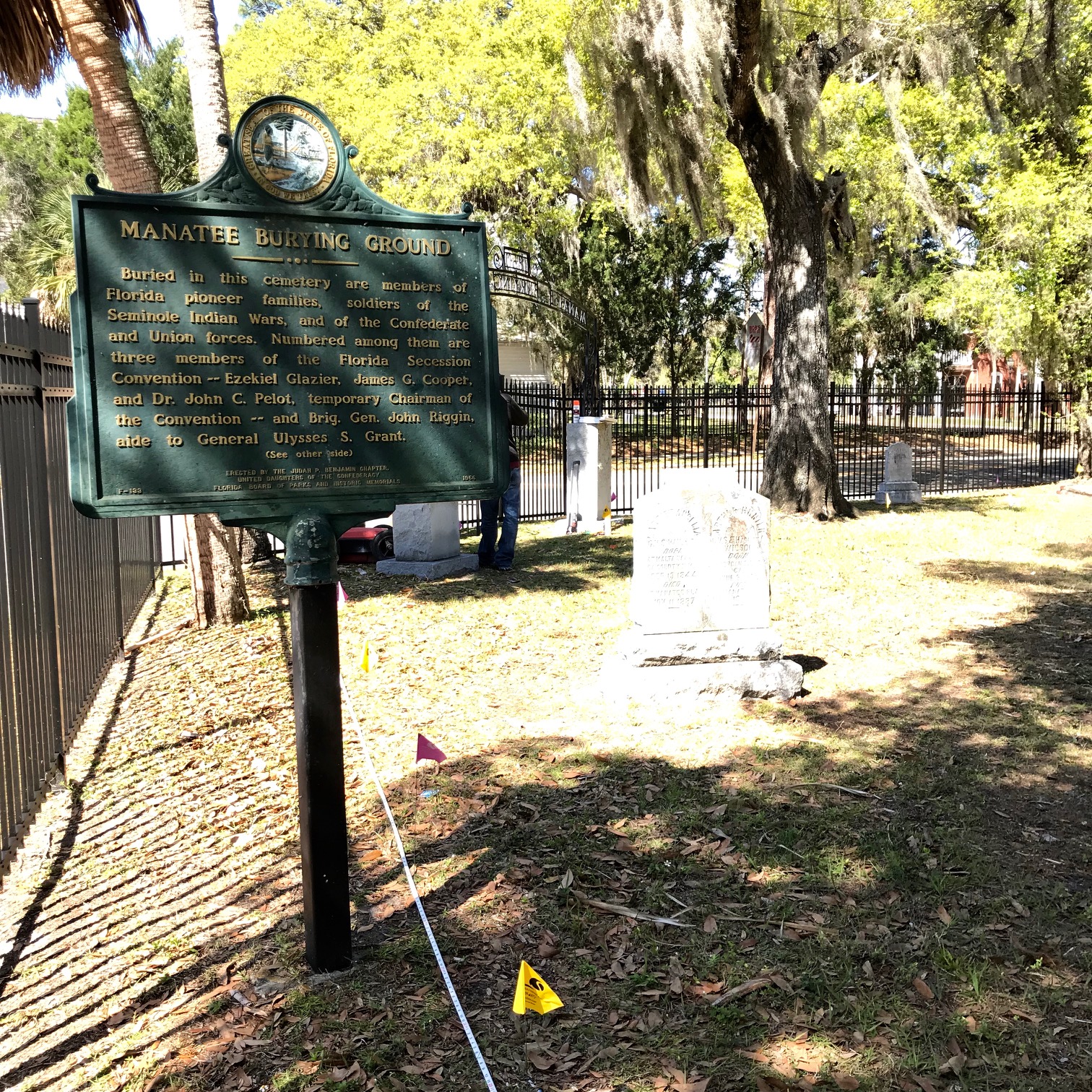 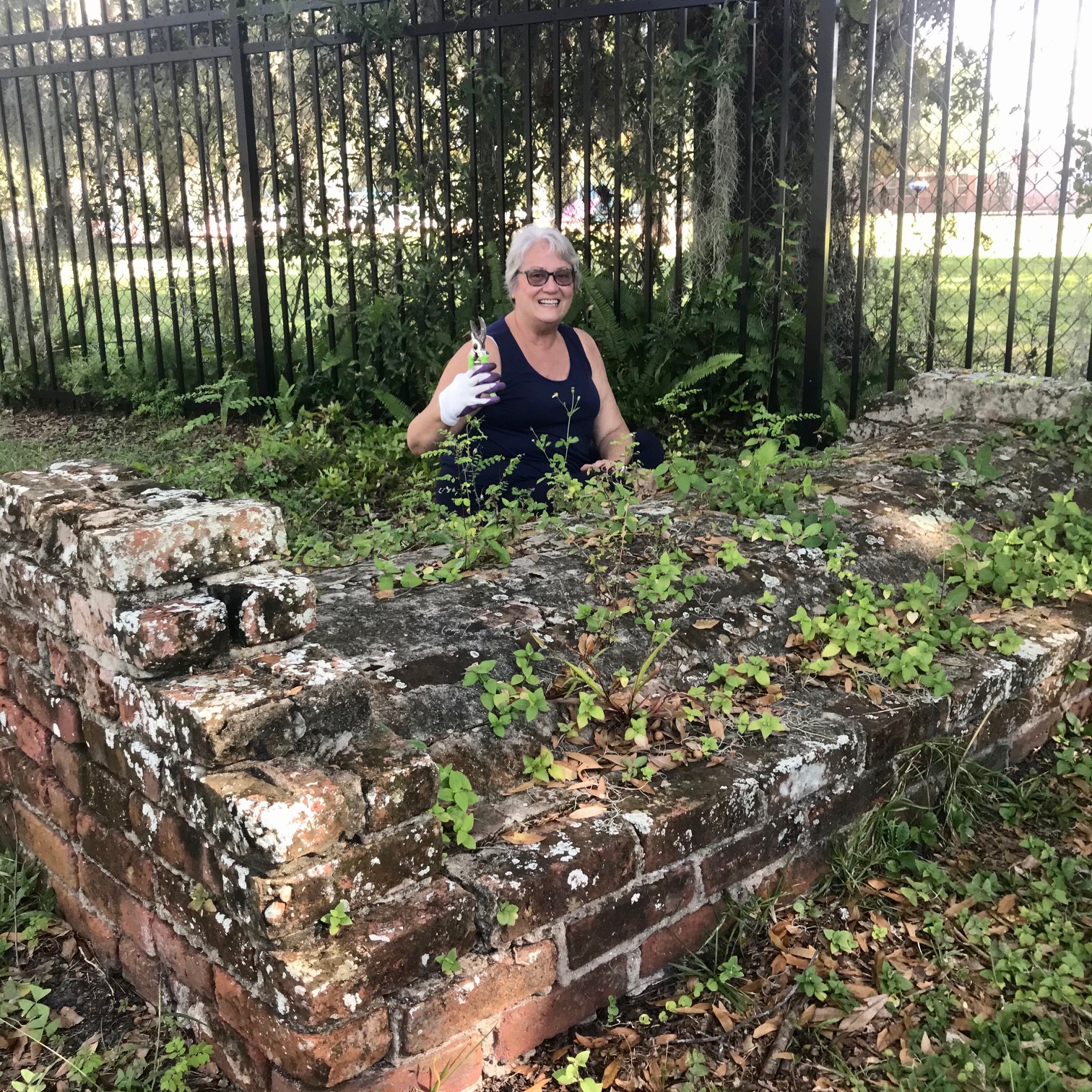 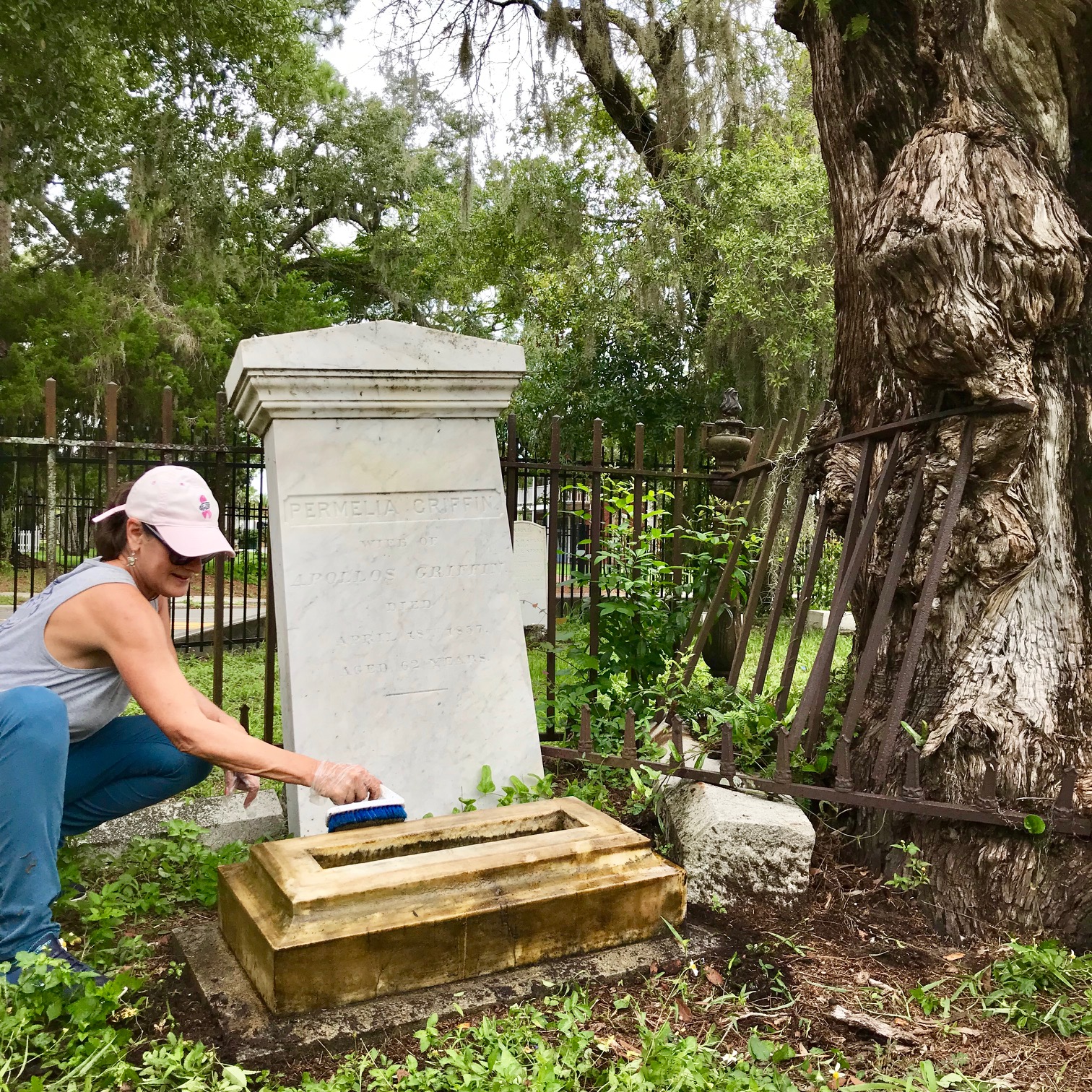 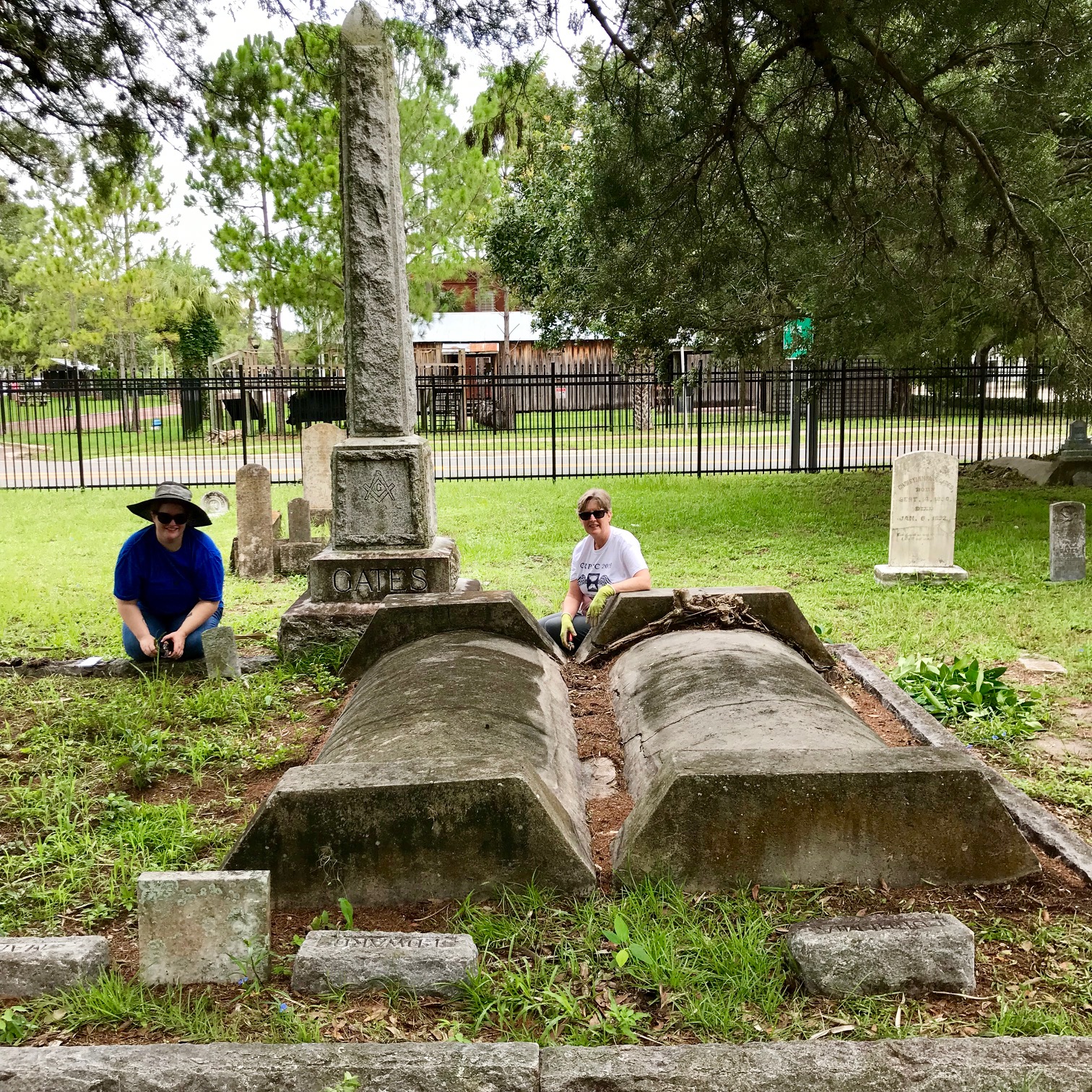 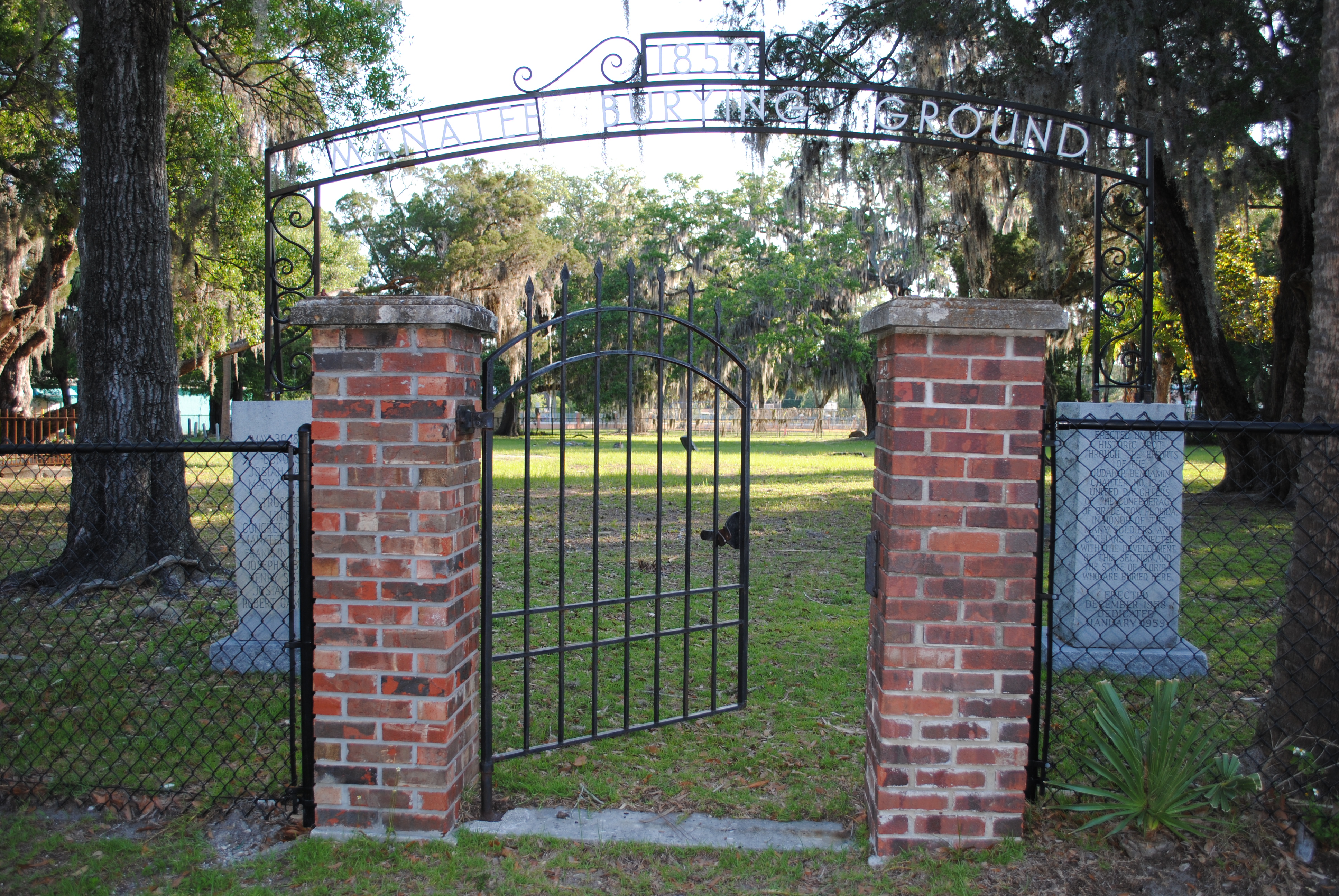 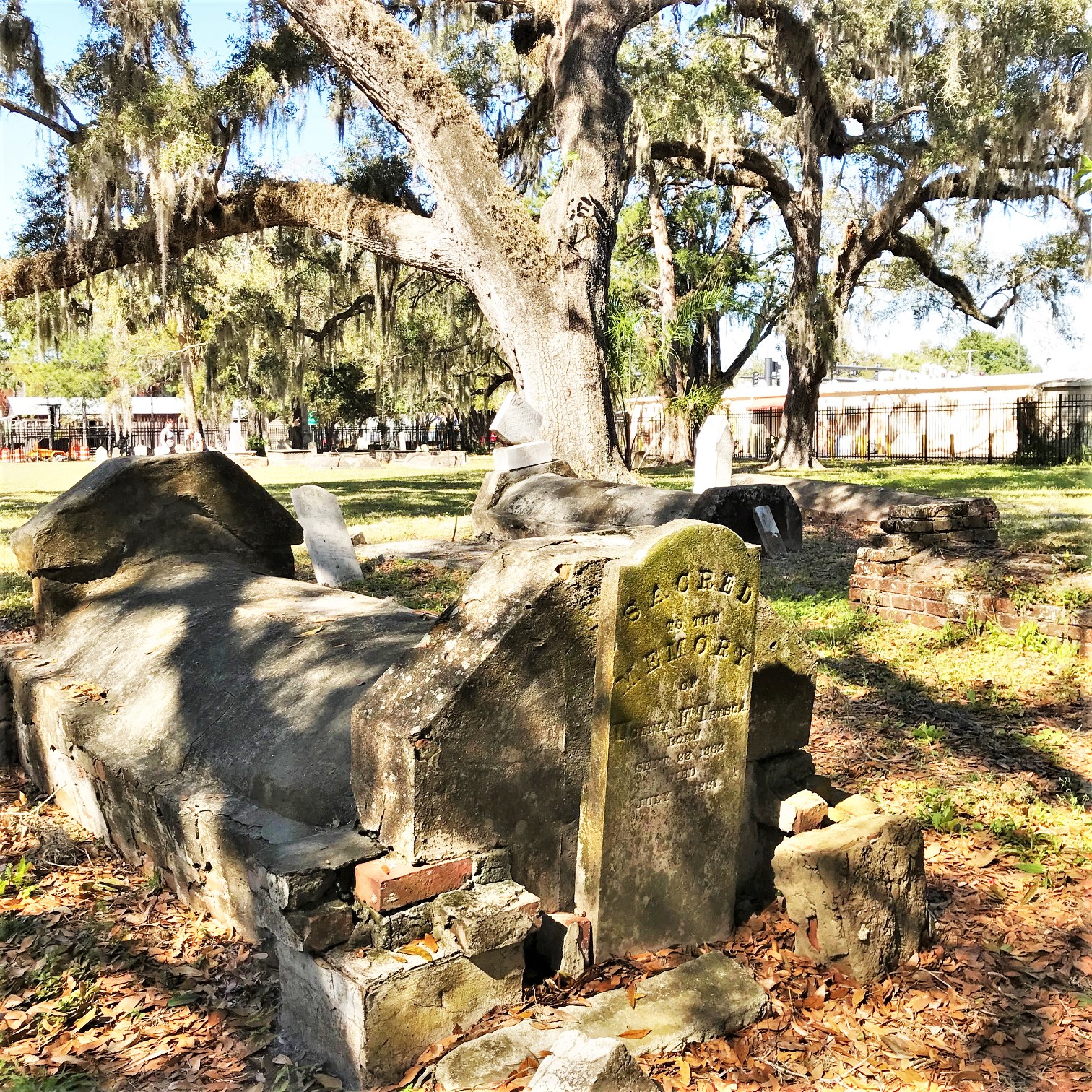 Historic cemeteries help us learn a lot about a community. Cemeteries provided a safe place to bury bodies where they could not transmit disease and the beautiful grounds provided a calming place for loved ones to grieve. But, to future generations, they are also an important record of the lives that people lived.

While we can find out a lot of information about the past through documents and photos, we can also learn from the design of headstones, the materials used, the trees planted, and the burial patterns. Marker materials and decorations teach us about an individual’s status, as well as the beliefs of the people of that time period. Birth and death dates on markers might help fill in gaps in birth and death records. Additionally, cemeteries can help us learn about funerary trade patterns, the history of mass production, traditions, religious beliefs, local businesses, and the United States as a whole. They are a record of wars, diseases, and natural disasters. Historic burying grounds, like the 1850s Manatee Burying Ground, act as museums in their own right, and provide a backdrop to learn about the people buried in these historic grounds.

Here are some commonly asked questions and their answers:

1)     Why are there so many headstones missing?

Answer: Headstones were a very expensive commodity. Many individuals used wooden headstones to mark the location of a deceased loved one, which then would deteriorate over time.

2)     How did communities organize cemeteries?

Answer: Early communities often organized cemeteries around churches or near town centers. It was also common to bury loved ones on your property, near your home. But in the 1800s, people began to worry about diseases from decaying bodies so they started to create larger cemeteries on the outskirts of town. These cemeteries, separated from the centers of daily life, influenced the design of the modern cemeteries we have today.

3)     What’s the difference between a cemetery, graveyard or burying ground?

Answer: While we often use these terms interchangeably, there are actually differences between the three. A graveyard is on church grounds, while cemeteries are usually larger and owned by secular officials. Burial ground refers to cemeteries that are smaller and more informal.

Answer: Before the 19th Century, there were no formal standards for grave depth. Because of this, bones would often come out of the ground due to erosion, animals, or storms. By the 1800s, new laws were created requiring minimum depths of three feet. In Florida, many people were buried in vaults of crypts because of the water table (digging down past three feet often meant hitting water).

5)     Was the Manatee Burying Ground segregated?

Answer: The Manatee Burying Ground is segregated. Throughout American history, cemeteries have been segregated based on factors like the color of a person’s skin or their religion. In places like St. Augustine, Protestants were required to be buried outside of the city limits, as only Catholics could be buried within St. Augustine. The Manatee Burying Grounds was not segregated by religion, but only people of European descent could be buried here. The Adams and Rogers Cemetery located in Northwest Bradenton is an example of an African-American cemetery.

Manatee Village Historical Park assists the City of Bradenton in maintaining the cemetery. Learn more about the bi-monthly clean-ups on Manatee Village's website.

Please be respectful when touring the cemetery. Do not sit, stand, or lean on headstones and vaults. Do not create headstone rubbings. Please lock the gates behind you when you leave.