Historical Marker: John Brown and the Siege of Lawrence, September 14-15, 1856

The years before the Civil War was a often a violent one, especially in Kansas. Violence was so prevalent in the state that the period from 1854-1861 was dubbed "Bleeding Kansas" for all the confrontations between pro-slavery and anti-slavery groups. Slavery proponents wanted Kansas to be admitted into the country as a slave state; anti-slavery proponents did not. Lawrence was a major target for anti-slavery forces because it was founded by abolitionists. The town suffered an attack in May of 1856, known as the First Sacking of Lawrence. The second confrontation occurred on September 14-15, and this time the well-known abolitionist John Brown (who would later be captured and hanged for his raid on the federal armory at Harper's Ferry, Virginia in 1859) was in Lawrence, helping rally the townspeople to defend the town, which was threatened by a force of 2,700 Missourians located a few miles to the southeast. The locals built earthworks and were armed with guns as well as pitchforks and anything else they could find. The force attacked but were driven back by the townspeople. A U.S. army force of 300 dragoons, who had canons with them, arrived and took up positions defending the town. On the morning of the 15th, the governor arrived to lead negotiations between the opposing groups. The Missouri force agreed to disband and leave. However, many of these men would return in 1863 on the infamous Quantrill Raid massacre, which left 200 men and boys dead or missing. The marker describing the events is affixed to the wall of the cafe at this location.

The marker describing the events of the siege 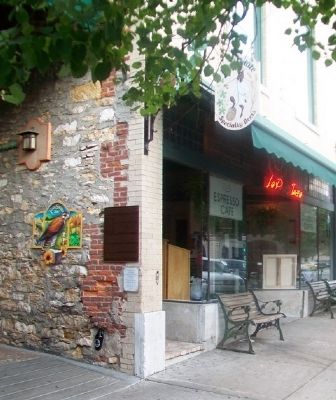