Established in Lawrence in 1854, Plymouth Congregational Church is the oldest church in Kansas. The current brick church building was built in 1870, and is classified in the Late Victorian, Gothic Revival, and Romanesque Revival architectural styles. The building was prominent Kansas architect John G. Haskell’s first church (National Register). Like Lawrence itself, the church has a strong connection with the abolition and Free State movements; Reverend Richard Cordley, an early minister at Plymouth, was a noted abolitionist preacher, and the church was founded by Free Staters. Throughout its history, the church's congregation has continued to be active in the community, particularly in political and social matters. 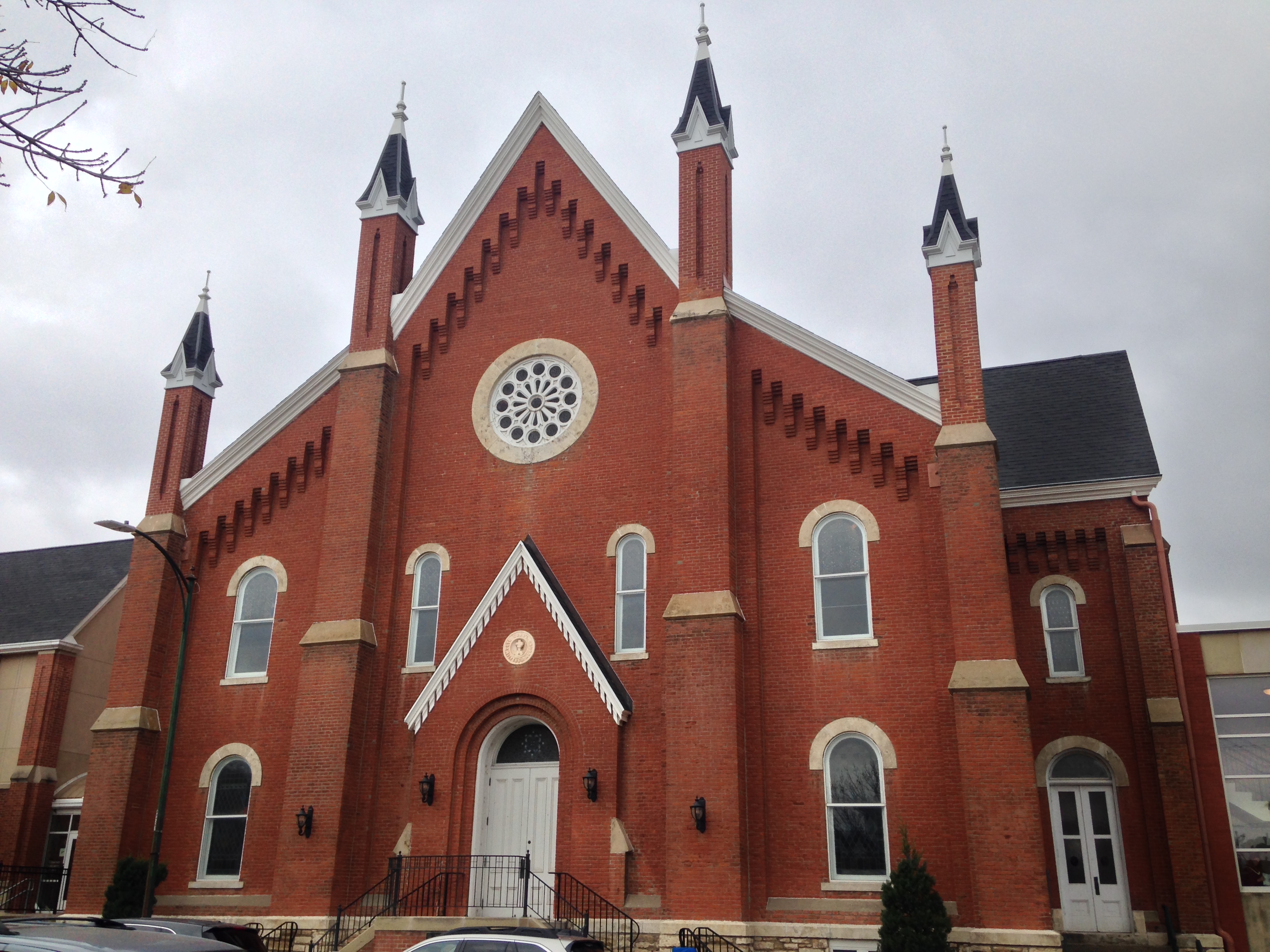 Plymouth in the 1870s. Photo from church website http://plymouthlawrence.com/about-us/history/. 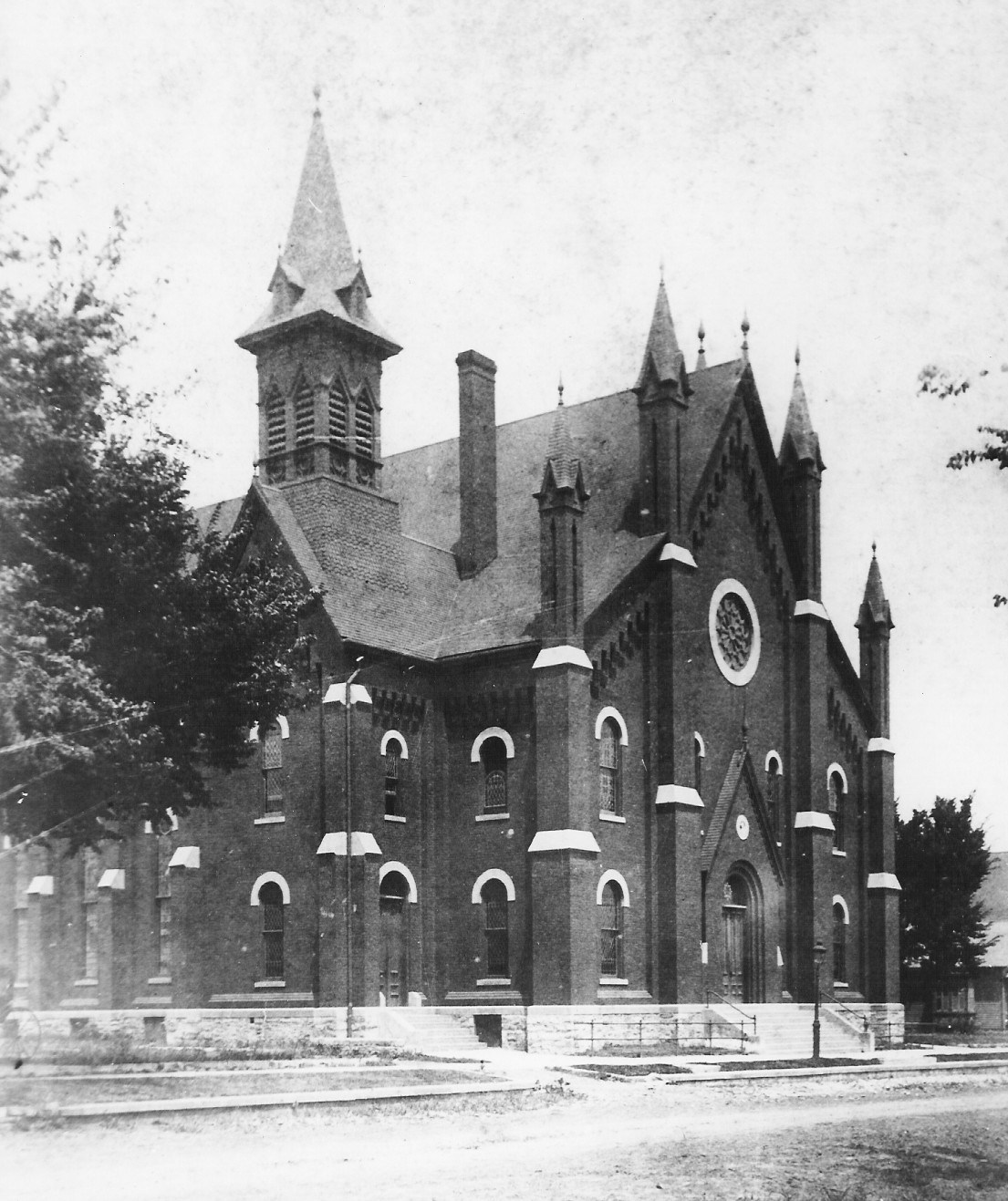 The church that stands today is not the original church building; at least two other structures housed services in the early days of Lawrence. Services were initially held in what was called the “Pioneer Boarding House,” a crude structure that served as the town’s first hotel. Sometime in 1856, the congregation began construction on a small stone building, which would not be completely finished until 1862. This stone church stood on the corner of Louisiana and Pinkney (now 6th) streets [Pioneer Days, 69-83]. Soon after Quantrill’s raid in 1863 the congregation began plan for a new building, which is the current home of Plymouth. The brick building that stands today was built between 1868 and 1870, and was designed by John Haskell, and is among several Lawrence buildings designed by the architect. Examples of his work that still stand today in Lawrence include Bailey Hall on the University of Kansas’ campus (built 1900), the Douglas county courthouse (1100 Massachusetts, built 1903), the English Lutheran Church (1040 New Hampshire, built 1870), and the Ludington-Thatcher house (1613 Tennessee, built 1860s). Haskell was also a member of the church’s congregation, and his father was a charter member [National Register, section 8, page 9].

The congregation of Plymouth has always had a strong connection to the community and social affairs. Like Lawrence itself, Plymouth has a strong connection with abolition and prohibition: when Kansas Territory was opened for settlement, many abolitionists from Massachusetts came to the new territory. The “Emigrant Aid Company” was formed in Massachusetts in order to help facilitate emigrants moving westward. In addition to being dedicated to the abolitionist cause, early settlers of the town also proponents of prohibition; soon after its founding, Lawrence was voted to be a prohibition town (A History). The Reverend Richard Cordley, an abolitionist preacher from New England who led the church for nearly forty years, wrote in his book Pioneer days in Kansas that:

"This rough, unfinished building probably served the times more effectively than a better building would have done. Its unfinished condition made the trustees less particular about its use, and it served many important purposes besides those for which it specially designed. It was the only large rom in town, and was used for nearly all public purposes. Some of the most important political conventions ever held in the territory met in this building. Many other important meetings were held in this church, and many thrilling scenes occurred in it." (77)

This sentiment is echoed in the National Register of Historic Places (NRHP) application for Plymouth. This document, arguing for the historic importance of Plymouth church, illustrates the active life the congregation has played in community affairs. For example, Reverend Cordley and others of the congregation were involved abolitionists, and supported the free state cause. As the document claims: “These early members laid the foundation for the social and political engagement of future generations” [section 8, page 7]. Other examples of the social activity of Plymouth members include Civil Rights work during the 1940s, 1950s, and 1960s, and that “the church was a leader in the push for early childhood education in the 1960s” [section 8, page 8]. Current social and political engagement includes active support for LGBTQ+ rights, active support of Black Lives Matter, and engagement in the local community on issues such as homelessness.

Richard Cordley, A History of Lawrence, Kansas: From the First Settlement to the Close of the Rebellion, (Lawrence Journal Press: Lawrence, 1895/Walsworth Publishing Company, 1976)