The Shunganunga Boulder had tremendous significance to the Kanza, a Native American tribe that resided in the area that became eastern Kansas. In the 1920s, white residents of Topeka decided that they wanted the stone removed from its location at the junction of the Shunganunga Creek and Kansas River and placed near the state capital. Not to be outdone, businessmen in Lawrence decided to snag the boulder and place it in their city. And so, in the middle of the night, a sacred natural landmark became the property of the city of Lawrence. The city of Lawrence dedicated the rock in 1929 and added a plaque that reads: "To the pioneers of Kansas who in devotion to human freedom came into a wilderness, suffered hardships and faced danger and death to found this state in righteousness."

Shunganunga Boulder is located in Robinson Park across from the City Hall. 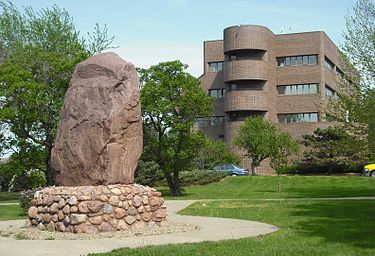 The Kanza tribe has requested that the boulder be removed to its original location at the junction of the creek and the Kansas River but the city has not indicated a willingness to consider this request unless the tribe can "prove" ownership or demonstrate its precise original location.