The Philadelphia Museum of Art is among the largest art museums in the United States. It has collections of more than 227,000 objects that include world-class holdings of European and American paintings, prints, drawings, and decorative arts. The Perelman Building opened in 2007, and houses some of the more popular collections, as well as the Museum's library, with over 200,000 books and periodicals, and 1.6 million other documents.

Like Philadelphia’s own Parthenon, the Philadelphia Museum of Art sits majestically on a rise at the end of the Benjamin Franklin Parkway. 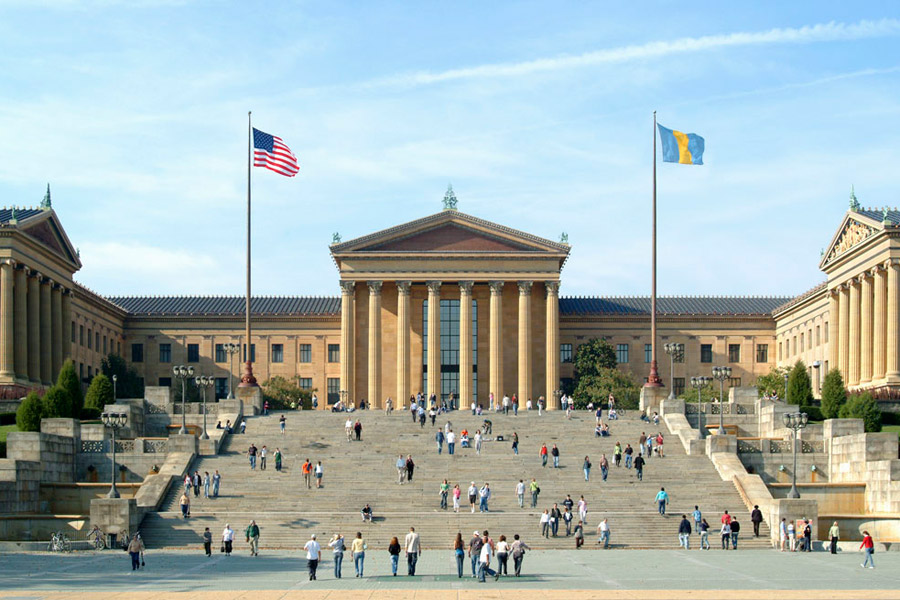 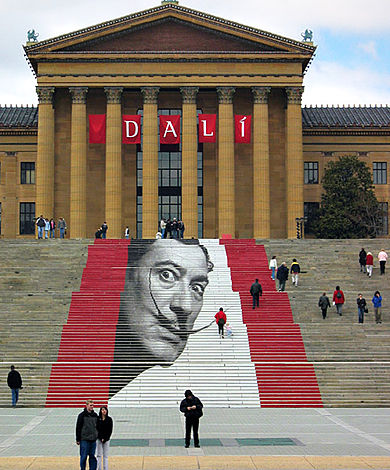 The Museum began as a legacy of the great Centennial Exhibition of 1876, held in Fairmount Park. At the conclusion of the celebrations, Memorial Hall--which had been constructed as the Exhibition's art gallery-- remained open as a Museum of Art and Industry "for the improvement and enjoyment of the people of the Commonwealth".
In the first few decades, the collections consisted of objects of an industrial nature, as well as fine and decorative art objects such as European ceramics. Books were also among the Museum's earliest acquisitions, as were antique furniture, enamels, carved ivories, jewelry, metalwork, glass, pottery, porcelain, textiles, and paintings.

In the early 1900s, the Museum published its first collection handbook and initiated an Education program for the general public. It wasn't long before a Membership program was in place, and plans for a new building gained momentum in the following decade.
Director Fiske Kimball set the tone for a new era in the 1920s, and the opening of the new building on Fairmount--what is now the Main Building--opened with an attendance record of one million visitors in its first year. Valiant marketing efforts and the skillful leadership of President J. Stogdell Stokes helped to keep the Museum vital during the Great Depression of the 1930s, while the 1940s witnessed extraordinary growth in the collections with a number of important gifts--including the John D. McIlhenny Collection and the George Grey Barnard Collection.

Acquisitions of the 1950s, such as the Louise and Walter Arensberg Collection and the A.E. Gallatin Collection, assured the Museum's prominence as a place in which to see masterpieces of early modern art. A number of period rooms were opened to the public as well, and the decade even saw the gift of Grace Kelly's wedding dress following her royal 1956 wedding to Prince Rainier III of Monaco.

Conservation of objects and the renovation of the building were themes of the 1960s, with major gifts including The Mr. and Mrs. Carroll S. Tyson, Jr. Collection, The Samuel S. White III and Vera White Collection, 71 objects from designer Elsa Schiaparelli, and Marcel Duchamp's enigmatic Étant donnés. Renovation was a continued theme in the 1970s, as the institution prepared for grand celebrations in honor of the Museum's Centennial and the nation's Bicentennial.

The 1980s witnessed still more growth, with acquisitions ranging from Edgar Degas’s After the Bath to Cy Twombly's Fifty Days at Iliam. During the 1990s, the Museum made great technological strides as it prepared to leap into the 21st century. Many operations became computerized, greater energy-saving measures were implemented, and new enhancements and re-organization projects were seen both inside the galleries and outside on the grounds.

The Museum transitioned into the new millennium with ease, and continued to navigate the changes that the first decade would bring with grace and strength. Now, with an astonishing history behind it, the Philadelphia Museum of Art is poised to meet the decades to come as one of the nation's foremost destinations in which to see world-class art.