The Roberts Hotel is a six-story steel-framed building covered in brick with Indiana limestone details. The hotel building was constructed in 1921 in a Colonial Revival style with 200 rooms and is named for George Roberts. The basement and lower levels are square in plan while the upper floor are ell-shaped, fronting High and Howard Streets on the west and south sides, respectively. When the building was nominated to the National Register in 1982, the hotel lobby and first floor and main dining room were contributing elements. The hotel closed in 1972 but reopened in 1976. The Roberts Hotel was converted into apartments in the 2010s and is now known as the Lofts at Roberts.

The Margaret and George Riley Jones house was constructed from 1901 to 1903 in Colonial Revival style. The wood frame, 2-1/2 story structure is sheathed in red brick and is topped by a gable roof with dormers. The front porch with its grand columns is topped by a balcony spanning all five bays, with the second story windows detailed in stained glass. The historic home was added to the National Register in 1984. The social club for professional women that operated from the home and rehabilitated the structure beginning in the 1980s closed in 2003. The building now contains law offices of The Cross Law Firm after being purchased by P. Gregory Cross. 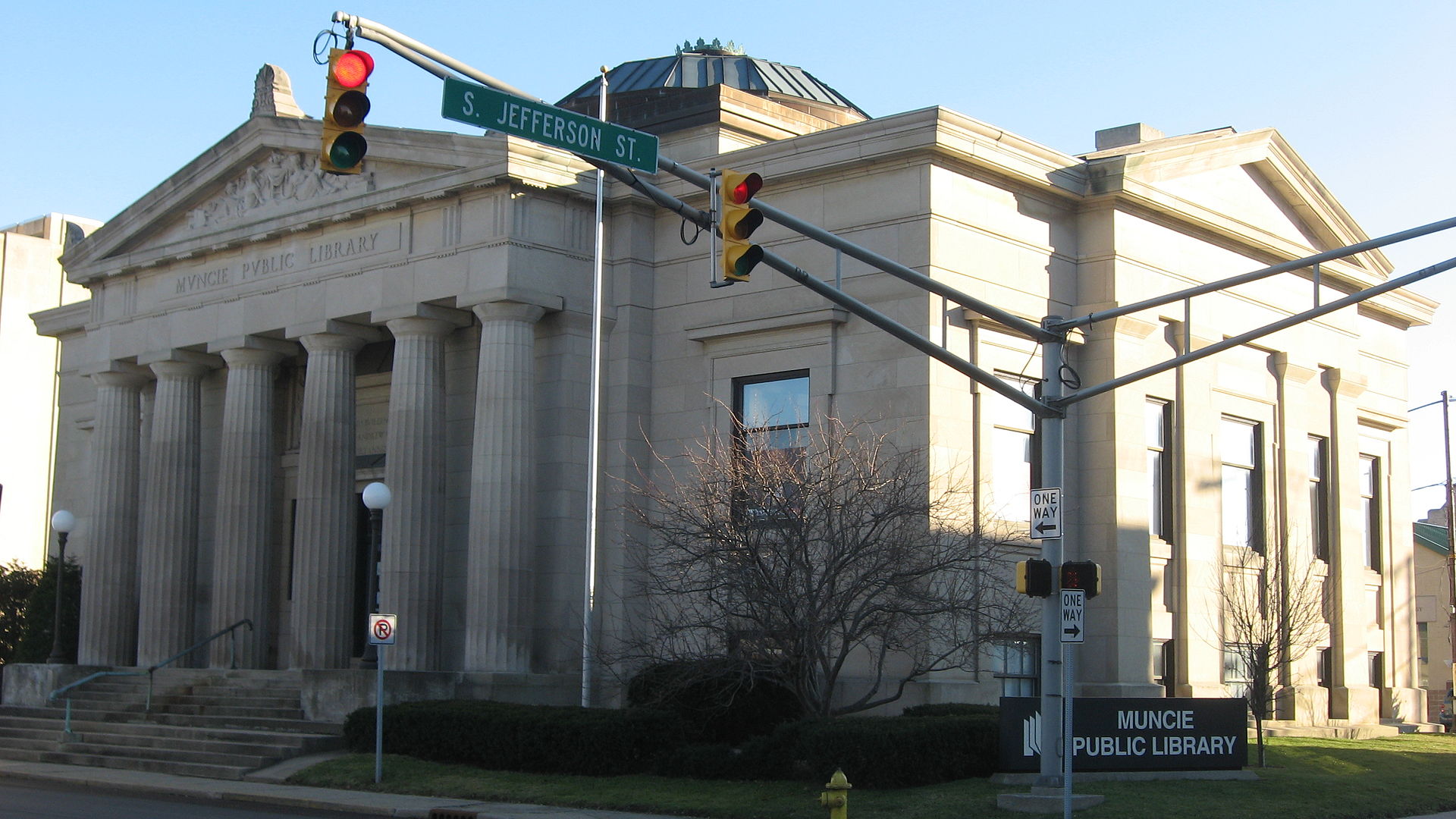 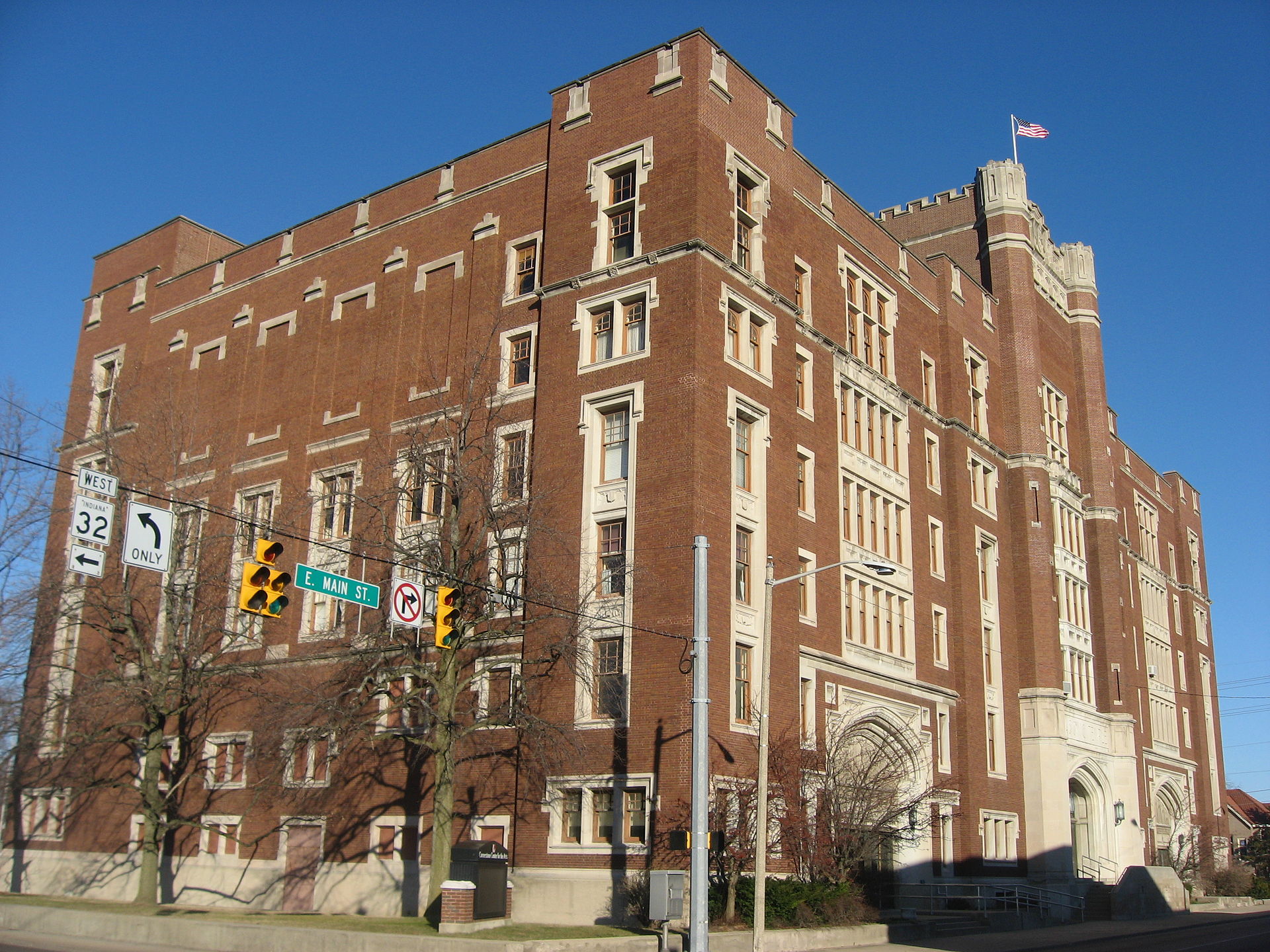 The Masonic Temple is an historic building in Muncie, Indiana. The Gothic Revival building was built between 1923 and 1926 and designed by well-known local architects Cuno Kibele and Wave Garrard in the Gothic Revival style. It is a massive, six-story structure and was considered an important achievement for the city at the time of its completion. It was deemed the largest York Rite Masonic Temple in the world upon completion, at a cost of around one million dollars. It was listed on the National Register of Historic Places in 1984. It now houses the Cornerstone Center for the Arts, which provides arts programming to the community.

Muncie is the county seat of Delaware County. The Delaware County Historical Society's headquarters are on East Washington Street. Their resource center and library are open Tuesday to Friday 12p to 4p and by appointment. Their members give talks on a number of topics of local interest to groups. DCHS also maintains the Moore-Youse Home Museum next door, in a circa 1860 wood frame house that was owned by one family for 118 years. One of the oldest standing structures in Muncie, the Moore-Youse Home was listed in the National Register in 1984.

This brick Queen Anne style structure with limestone detailing was built in 1899 as a combined residential and commercial building by local cigar store owner, Eli Hoover. The two-and-one-half story, red brick building has an irregular roof with multiple gables of varying pitch and size; slate fishtail shingles cover some of the gable ends. The commercial entrance is through the southeast corner of the building, while the residential entrance door is accessed by a front porch against the southwest portion of the structure. The porch columns are round with Corinthian capitals. The Eli Hoover House and Confectionery was listed in the National Register of Historic Places in 1988 as a contributing structure in the Historic Resources of Downtown Muncie Multiple Resource Area; at that time, the building was being used for commercial office space.