This historical marker commemorates the life of master blacksmith and airplane builder John Valentine Pliska (1879-1956), who, in 1912, was the first local to build and fly an airplane. The marker was placed here because this is where Pliska's blacksmith shop was once located. Pliska is also notable for being associated with General John J. Pershing (1860-1948), who had Pliska shoe his horses at the shop in 1907.

The historical marker describes Pliska's accomplishments and indicates where his blacksmith shop was once located. 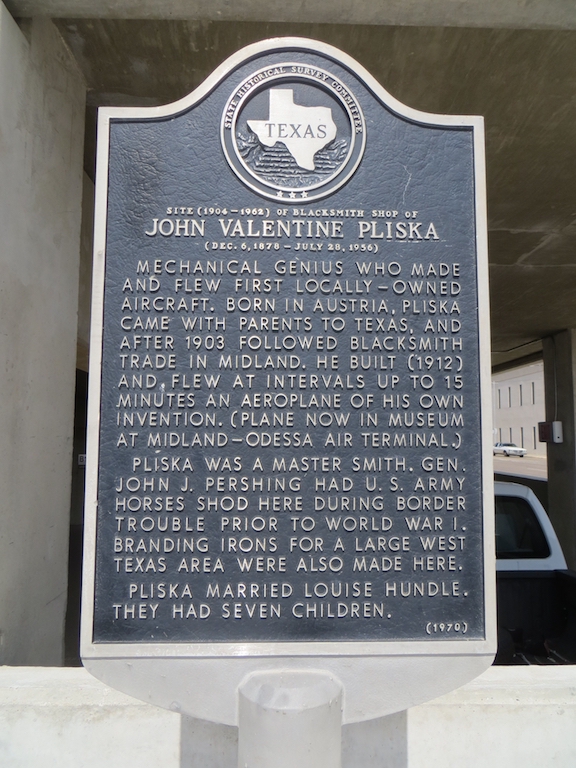 Pliska was born in the town of Tyne, Moravia, which is located in the Czech Republic, on December 6, 1879. His father operated a blacksmith shop and a carriage shop and Pliska apprenticed in both growing up. As a young man in the Austro-Hungarian Army, he attended a balloon and glider school; he would later use the skills he learned to build the airplane. In 1896, he and his family immigrated to the United States and settled in central Texas.

In 1903, Pliska decided to go to Mexico but on the way there, the train stopped in Midland and went to the local blacksmith shop to check it out. After learning about Pliska's background, the shop owner, C.C. Slaughter, accepted Pliska's offer to help repair a windmill. Impressed with his skills, Slaughter hired him to work on his ranch. Two years later, he got married to a woman named Louise Handle and they lived at the ranch (they would eventually have seven children). In 1907, he and Louise's brother, John, bought a blacksmith in Midland, where they would shoe the horses for General Pershing.

The next year is when Pliska started to make plans to build the plane. Over the next couple of years he gathered materials and even got a closeup look at one of the planes built by the Wright Brothers, which landed in Midland as it was making a trip across the country. Finally, he finished the plane in 1912. It had a 33- foot long wingspan, 27.5 fuselage, and was 7.5 feet tall. It was, however, only able to fly for 15 minutes, did not have enough power, and the wings had canvas cloth instead of the more expensive balloon silk.

Pliska eventually dismantled the plane later that year after it hit some trees. Louise was also very worried about his safety. He never reassembled the plane again and it remained in storage for the rest of his life. He worked at the blacksmith shop until 1952 when health problems forced him to retire. He passed away in 1956. Their children donated the plane, which was stored in the shop, to the city in 1962. Local members of the Experimental Aircraft Association restored it and it now hangs in the Midland airport.