Victoria Tower is one of the structures that dominates Guernsey’s skyline and was to commemorate the coming of Queen Victoria. It’s an imposing building, up to 100 feet high, made from local red granite. There are about 90 steps and make sure to get the key from Candie Museum to enter! 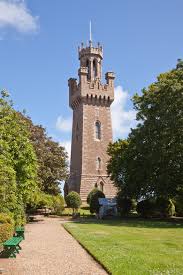 Victoria Tower’s construction started in 1848 and took about a year to build. It was built to commemorate Queen Victoria coming to Guernsey. It has stunning views and you can see the sea on two sides of Guernsey. Victoria tower was designed by William Colling in1848

The tower includes lots of different stonework and architectural features which were designed to represent the queen, her empire and her achievements. Many people came to see the opening of the tower. In total the tower cost about £2000 to build - this was paid for by public money.

Overall It stands 100 feet high. It is 200 feet above sea level. It was built on the site of a windmill and before that a menhir or standing stone. It symbolises the loyalty of the Guernsey people to the English monarchy. There is a rumour that victor Hugo and his mistress carved their initials in the towers wall: VH and JD.

The key to the tower is available from Guernsey Museum in Candie Gardens during normal opening hours.