The Austin Arts Center at Trinity College officially opened in 1965 and received its name from A. Everett “Chick” Austin, Jr., founder of the Trinity Department of Fine Arts. Austin was also the former director of Hartford’s Wadsworth Atheneum, which was the first public art museum in America. The building was made possible with the tremendous support of the Trinity in the early 1960s. They took the initiative and began to raise money for the two and a half million-dollar project. 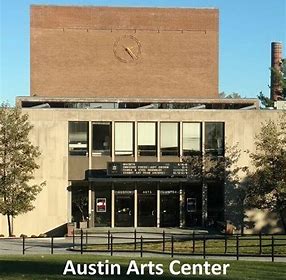 The Austin Arts Center gained exposure the following year, when it hosted many performances, including opera and plays. Arnold Franchetti, a famous composer at the time, hosted his world premier of "As a Conductor Dreams" in 1966. This was a catalyst for the Austin Arts Center, as they have been hosting both external performances and performances by Trinity students for over fifty years. It is still frequently used on Trinity's campus and has even added classrooms surrounding the auditorium. The Liberal Arts College relies on the Austin Arts Center for classes such as acting, music, and art, which is made easy with the help of a building focused primarily on art.