The Cinestudio was founded in 1970 by a group of devoted Trinity College students, with the official grand opening on February 16. It was a recreation of a 1930s film house. It is incorporated as a 501(c)(3) not-for-profit arts organization. Additionally, the theater is independent from Trinity College, despite its location. Currently, the Cinestudio remains running with the help of 50 dedicated Trinity students and community volunteers. It includes all genres of movies, including filmmaker national film festival created by Trinity students and is running seven days a week. 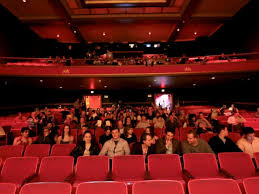 The founding members of the Cinestudio was a group of devoted Trinity College students. Two of the founding members, James Hanley and Peter McMorris continued their careers in the theater department. They had the help of other Trinity students in 1970, who transformed a lecture hall into a theater hall equipped with amazing sound quality, projection, and a wide range of programming. Additionally, the design and decor of the Cinestudio has similarities in appearance to a classic theater, specifically, because of the elaborate gold screen curtain and balcony. However, the appearance of the Cinestudio is viewed as modernized due to the late 20th century creation. The founding students received help from Ralph Mauro from the National Theater Supply and Lonny Jennings at Dolby. Additionally, the theater is independent from Trinity College, despite its location in the Clement Chemistry Building.

In 1970 the grand opening took place and was sold out. It took place on February 16 and Alice’s Restaurant and The Beatles’ Yellow Submarine were shown, which heavily contributed to the success of the first night and days and years to come. Students loved the Cinestudio and it quickly became one of the most popular activities for Trinity students to participate in. The staff and founding members used the ticket sales from the first year to help pay for the cost of equipment, hardware, and construction, which would be utilized when renovating the auditorium. In addition to film and visual showings, the revamped auditorium was used to heighten students intellectual experience through lectures during the day. Some disciplines that have accessed the Cinestudio for academic benefits have largely been within the English and Religion departments. After the founding members creation of the studio, the Cinestudio became a student run project, which is a part of the Film Society program.

In 2002 the Cinestudio was incorporated as a 501(c)(3) not-for-profit arts organization. In 2007 the theater’s ticket booth was renamed to honor Fred Pfeil. Pfeil was a Trinity College professor who volunteered countless hours to the Cinestudio and was a Cinestudio Board Member. Currently, two of the founding members, Hanley and McMorris manage the operations and projections of the Cinestudio. The Cinestudio remains active seven days a week and continues to remain running with the help of Trinity students and community members.