The Robin L. Sheppard field, first built in the summer of 2002, is a state of the art artificial astroturf field, home to the Trinity College Field Hockey and Women’s Lacrosse teams. The first field was dedicated to the 25 year award winning field hockey and women’s lacrosse coach, Robin Sheppard. The field was revamped and redone in the summer of 2018, adding a Kwik goal benches on the field for both the home and visitor teams. In the summer of 2019, there was an addition for a water irrigation sprinkler to allow for easier coverage of field watering. 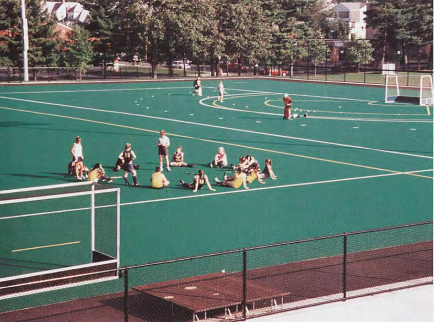 Robin Sheppard and the dawn of women's athletics at Trinity 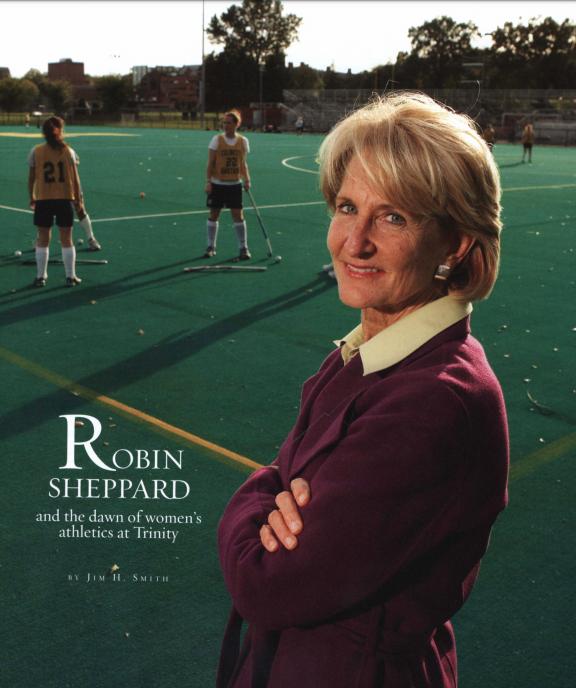 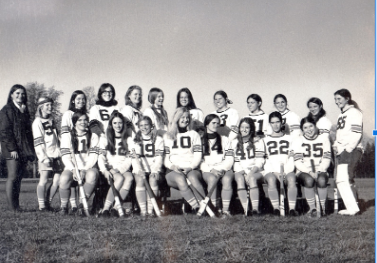 The old field hockey field used to cut horizontally through the soccer and baseball fields. 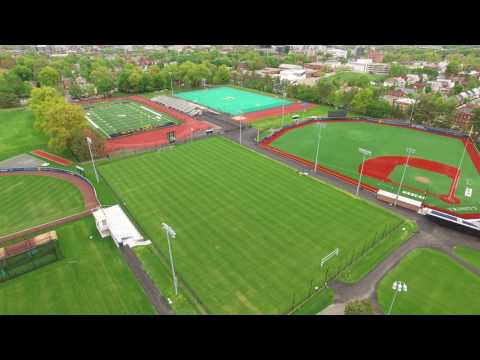 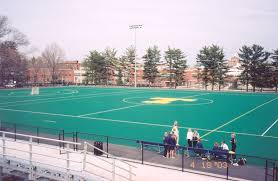 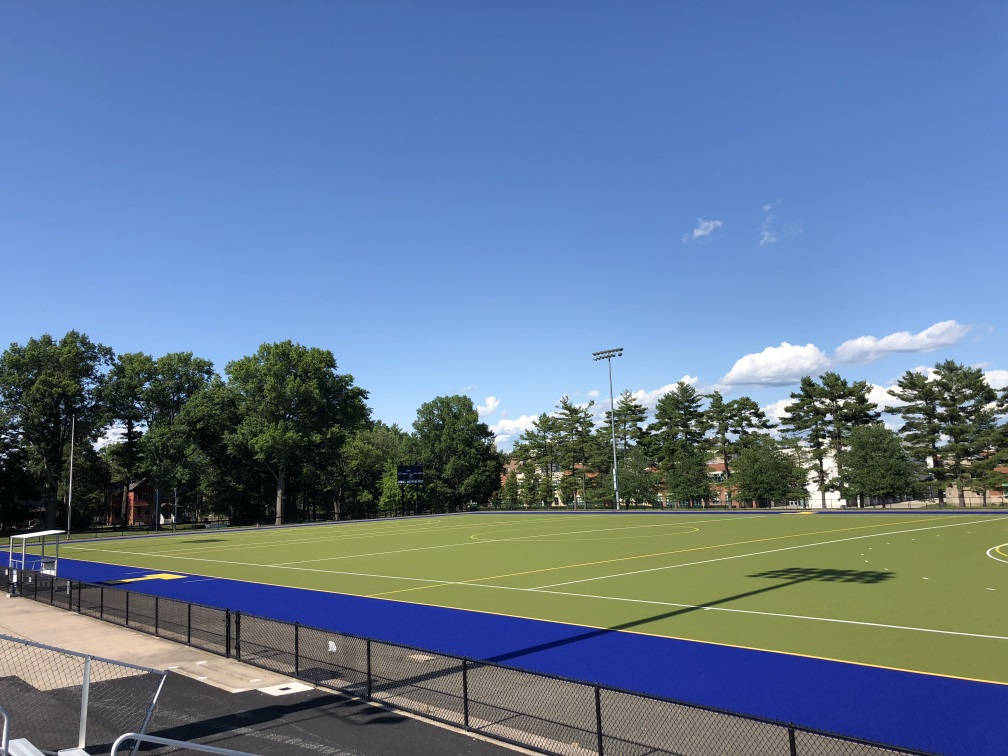 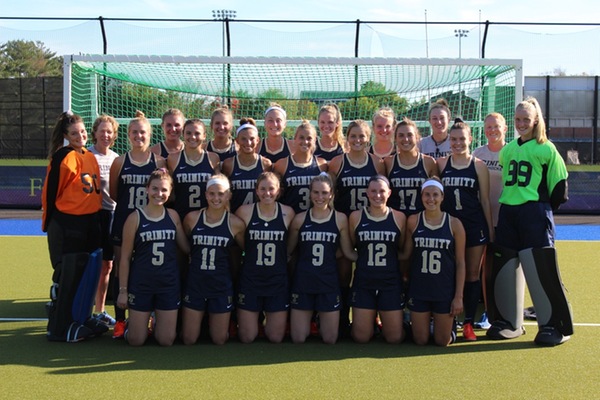 Trinity College, founded in 1823, as a all male institution, is a private liberal arts college in Hartford Connecticut with outstanding academics and athletics. The Fall of 1969 was a pivotal year for Trinity as they admitted the inaugural class of women. For the last 146 years Trinity was only home to men and through the addition of women to the college, Trinity would be one of the first co-educated schools of this time. With coeducation came the addition and adaption to school activities, academics and athletics. With the newly admitted women on campus, they wanted to participate in college athletics. The first women's team was tennis in the Fall of 1970. Tennis was the first as it a coach who was coaching a mens team said he would do it, in addition to their already being courts and the women could bring everything else.

The second team to be added to the roster for women's athletics was field hockey. The Trinity Reporter describes how field hockey came to school because of a certain person, “It was Ruth Wiggins '69 who brought field hockey to the College. Tina Poole Thomas '78 recalls that when she arrived at Trinity in 1974 - three years after creation of NESCAC and two years after passage of the Title IX legislation the team was still obliged to play on a field that was badly sodded, poorly maintained, and unlit. Their uniforms were hand me-down men's rugby shirts” which demonstrates the description of the field that the women’s field hockey team played on and dynamics of the sport. This was after the 1971 Title IX which described that there should be no discrimination based on sex at educational institutions, and athletics was considered a educational programs and activities. Even though the field was not ideal, the women described in the reporter that they loved playing and would adapt to the field conditions. They were lucky to be one of the first women’s teams at Trinity, and having there own field, was a privilege because not many women’s sports existed at Trinity during this time.

The field hockey team dealt with the conditions of the field channeling their frustrations to their advantage. Unlike any opponent's field that the Bantams played, the field at Trinity was extremely unique. The field was the only one that ran east-west while every other schools field ran north-south. So, when the coin toss occurred at the beginning of the game, Trinity would choose to face west in the first half because they knew that in the second half, the opponent would be looking straight into the sun. This was an advantage to the Bantams. In addition, the field was on a slant as most of Trinity is on a hill. So when the official at the beginning of the game what do you want to choose, they would say uphill or downhill. The Trinity team would go uphill in the first half because of the sun setting. The description of this field is very eyeopening as the field in place now is state of the art with no bumps or puddles like the old grass field.

The Campus Master Plan of 1997-1998 describes the plans to add a field hockey field. The Master Plan both describes and displays through drawings and photos that there was ample space for an additional field to be added.

In the summer of 2002, the new astro turf field was created, to be used by the Field Hockey and Women’s Lacrosse teams. Both teams would not have to play on soaking wet grass anymore choosing to go uphill in the first half. They would be able to play on a synthetic flat surface that would allow for the Bantams game to change. The field is extremely fast and when you add water, which is extremely common to do for field hockey, the ball moves even faster. The field was dedicated to Robin L. Sheppard, the outstanding field hockey and lacrosse coach who had just transitioned from the field to the office, to be the Associate Athletic Director. This occurred during the Homecoming festivities of the Fall of 2003. According to the Winter 2003 Reporter, Sheppard lead her team to more than 450 victories, seven NCAA Division III championship tournaments, and two trips to the Final Four. In addition, she was selected as the National Field Hockey Coaches Association New England Coach of the Year in 1997 and was inducted into the Connecticut Field Hockey Hall of Fame and the National Field Hockey Coaches Association Hall of Fame in 2002. The Robin L. Sheppard field was funded through the generous aid of Paul E. Raether '68, Nancy Dwyer '99 and the Dwyer Family, as well as donors to the Sheppard Fund.

For 16 years the Robin L. Sheppard Field was crucial to the success and advancement of both field hockey and lacrosse. The game of field hockey transformed from being played on grass to the transitioning to an artificial turf field where the ball did not hits bumps in the grass and you did not need to hit the heck out of the ball for it to move. The field was revamped in the summer of 2018 with a new developed surface which would allow the ball to move even faster during a field hockey game. With the redevelopment of the field came the addition of Kwik covered benches allowing for the teams to sit and seek shelter when training.

The Evolution of the Female Bantam