Constructed at the start of the Great Depression, this historic Des Moines bank building is a landmark of Art Deco architectural design. the building served as the headquarters of the Iowa-Des Moines National Bank from the 1930s through the early 1970s. Plans for the construction of this building began in 1929 following the merger of Des Moines National Bank with the Iowa National Bank and the Des Moines Savings Bank and Trust Company. The original plans called for the construction of a twenty-one story skyscraper. The banking collapse and the Great Depression led to a scaling bank of these plans. The building was completed in 1932 and was five stories high owing to a recognition that there would no longer be the same opportunity to receive reliable monthly revenue by leasing floor space to various companies as was common in other office towers owned by banks. This bank building was unique in that it rented space to retailers on the lowest floor and placed the bank offices on higher floors. The building is now home to the main Des Moines branch of US Bank. 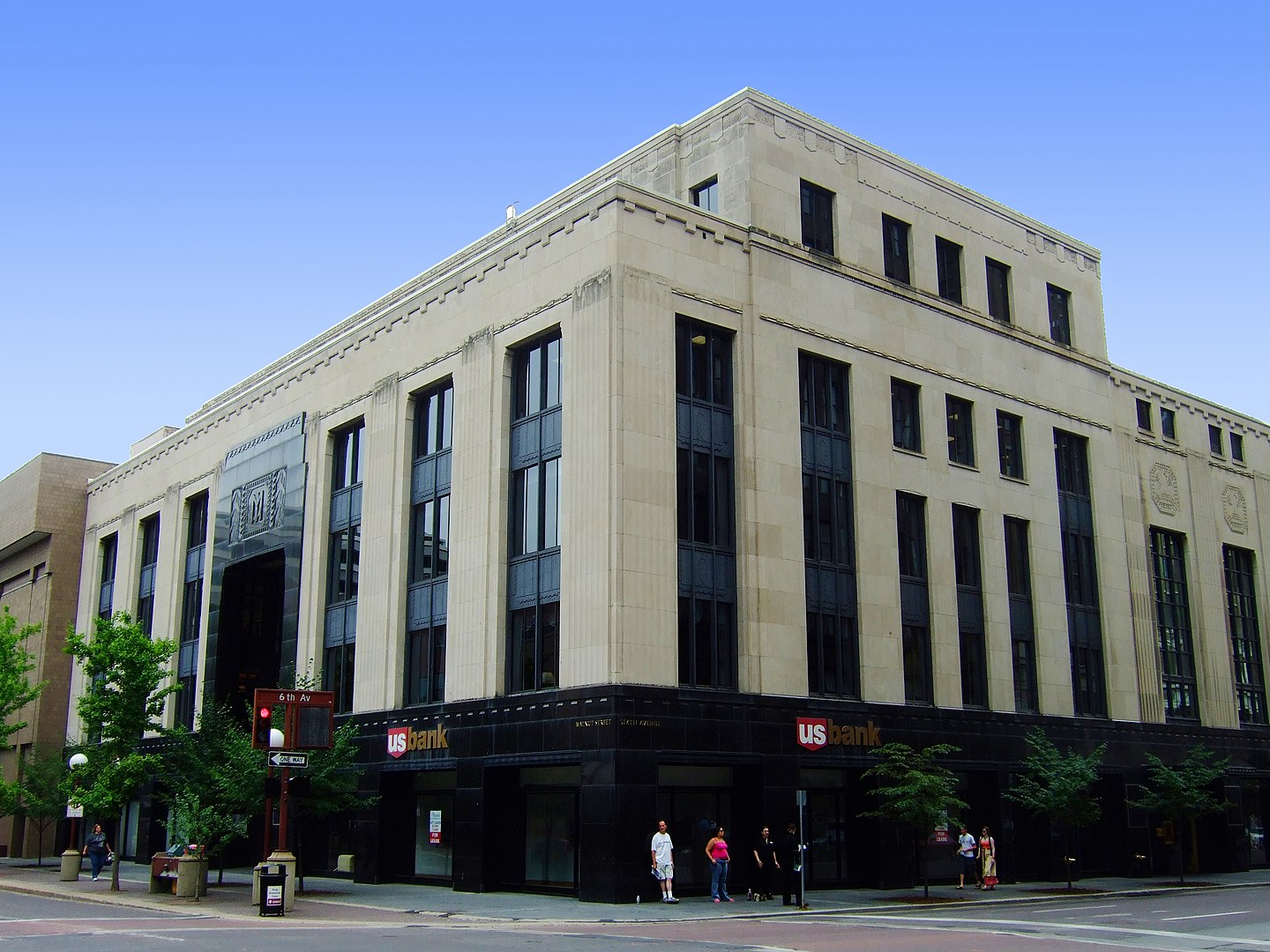 The Iowa-Des Moines Bank stands as one of a small number of Art-Deco designed commercial buildings in downtown Des Moines built during the late 1920s and 1930s. The banking rooms occupied the second floor while the first floor allowed for stores, a design feature that did not come into fashion until after the Great Depression arrived.

A bank had occupied the site on the south-east corner of Walnut and Sixth since 1882 when the Des Moines National Bank was located there. The present building resulted from the merger of the Des Moines National Bank with the Iowa National Bank and the Des Moines Savings Bank and Trust Company in 1929. The 1929 merger came with a dream for a large bank that would grow substantially. The bank's original plan involved a stepped-style skyscraper rising at least twenty-one stories with shops and the bank occupying the bottom five floors and rental spaces in the remaining upper floors. However, the Great Depression's ushered in a new reality and a decision to build a much smaller building that supported only the stores and banking offices.

The decision to place the bank on the second floor, possibly the first bank in the nation to do this, proved to be a successful idea. Allowing for shops to occupy the lower level supported more significant foot traffic and, thus, more potential bank customers. The idea grew more popular after 1930, when banks endured much harder times than during the Roaring '20s, making the concept a rather innovative one when it arose before the Wall Street crash of 1929.

The second-floor innovation certainly proved valuable because the bank did not open until 1932. Although its grand plans for a skyscraper never materialized, the bank did not fold during the Great Depression. The reduced budget allowed the bank to spend money on ornate details of the Art Deco structure. The interior included plenty of polished granite, bronze and marble features, elevators, sophisticated lighting, and an elegant, decorative safe in the cellar.