"Despite the cultural, social, and commercial opportunities New York offered, the city was not acceptable to Gari Melchers as a year-round place of residence. He needed a home and a studio in an undeveloped area to be close to the rural subject matter that he had always favored. Melchers was, no doubt, already looking for a country estate in 1916 when a Detroit architect, Frank Baldwin, who owned the Snowden estate in Fredericksburg, suggested that he consider Belmont. The artist must have been impressed by the picturesque site of this eighteenth-century Georgian home perched on a ridge overlooking the falls of the Rappahannock River in Falmouth, Virginia. Good rail service to New York satisfied an important practical consideration. Consequently, he purchased Belmont, acquiring the deed to the house and property in September 1916. Melchers was not the first owner to enlarge the house at Belmont, but his alteration was unique, for it expressed in architectural terms his long-standing fascination with light. The artist added the five-sided sun porch that now graces the southern side of the house. This luminous alcove boasts six expansive arched windows and a set of glass doors that open into a broad lawn." 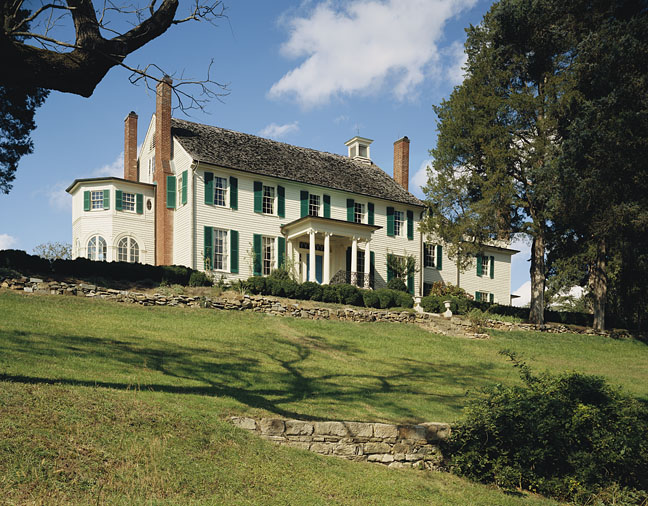 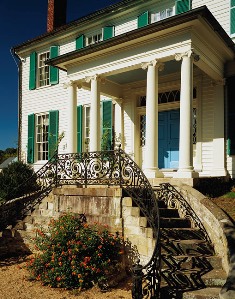 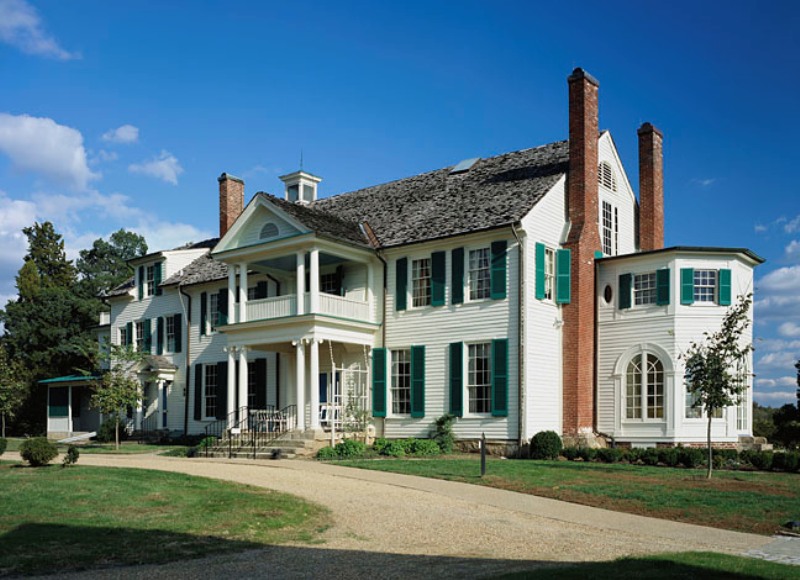 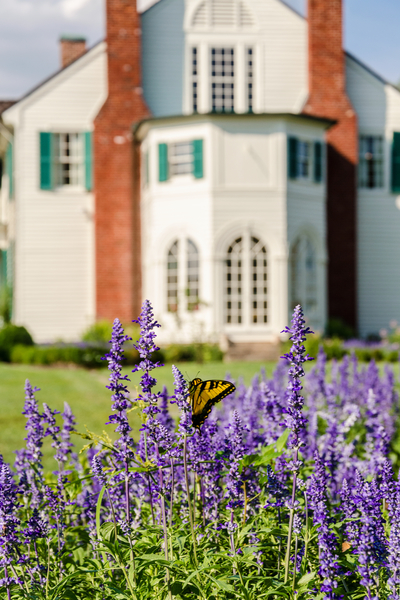 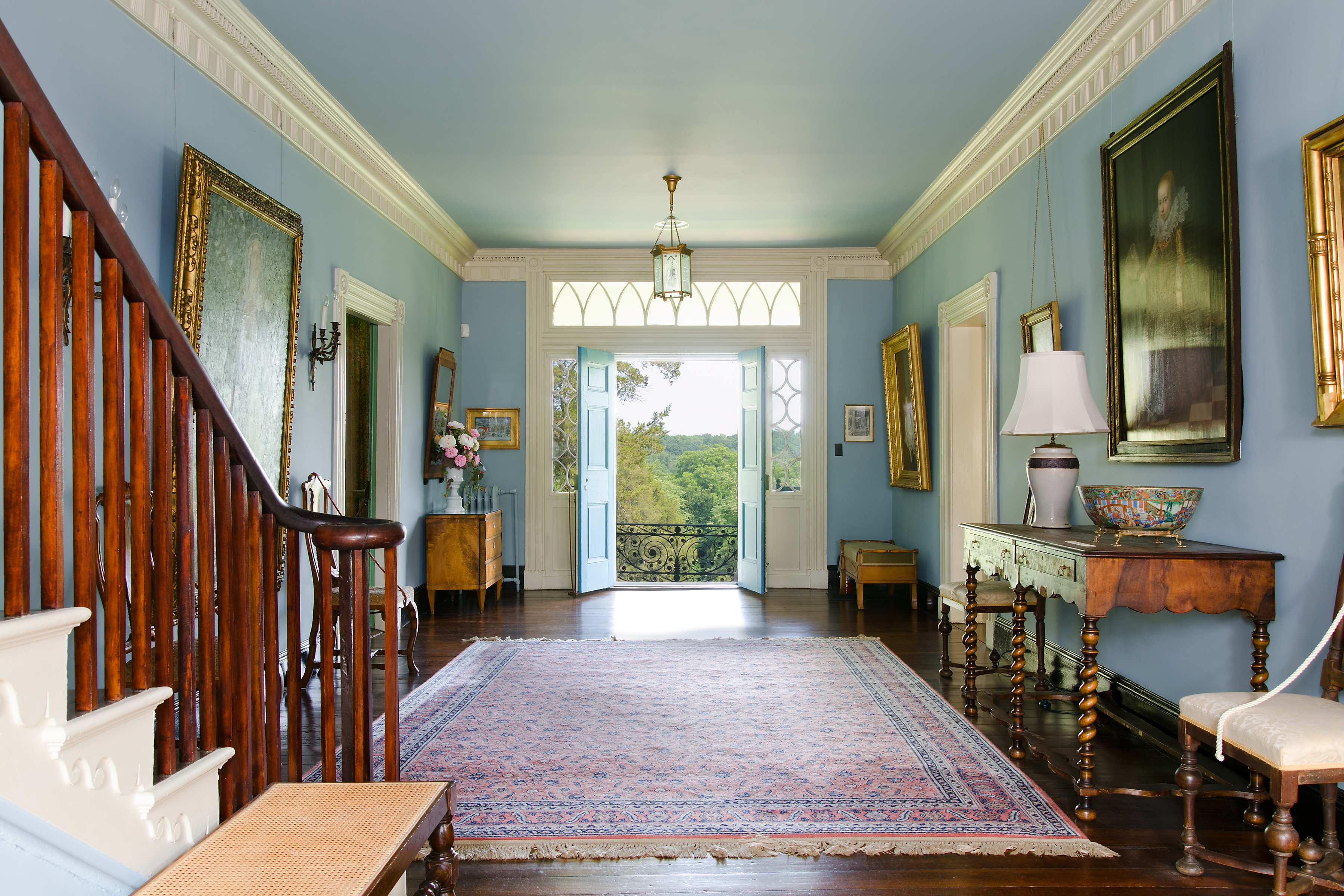 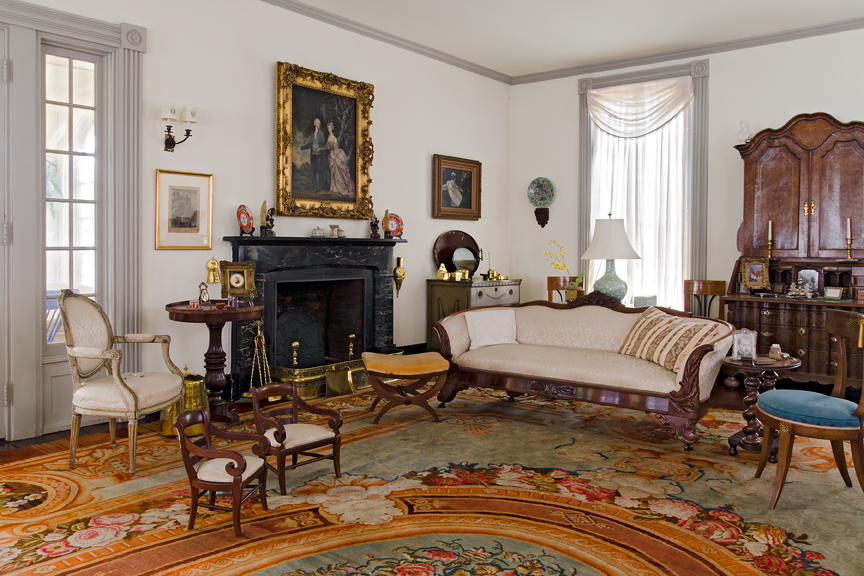 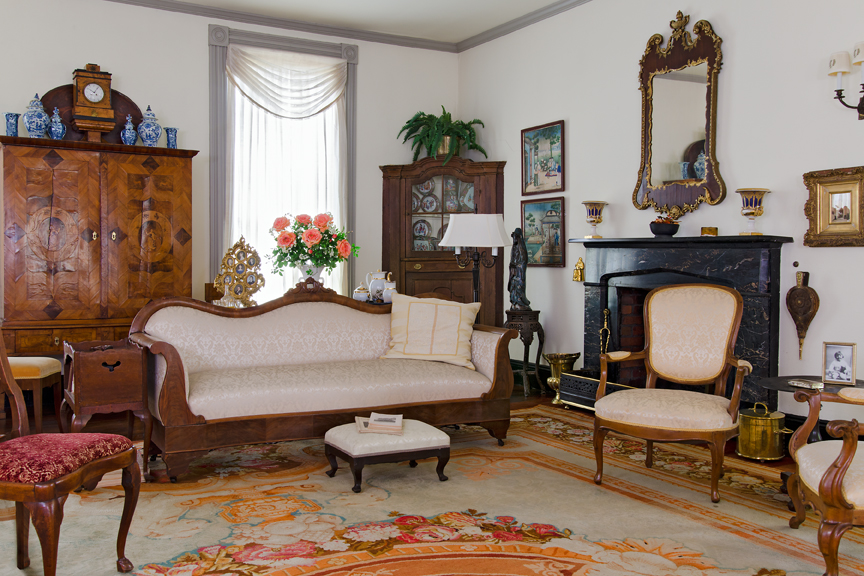 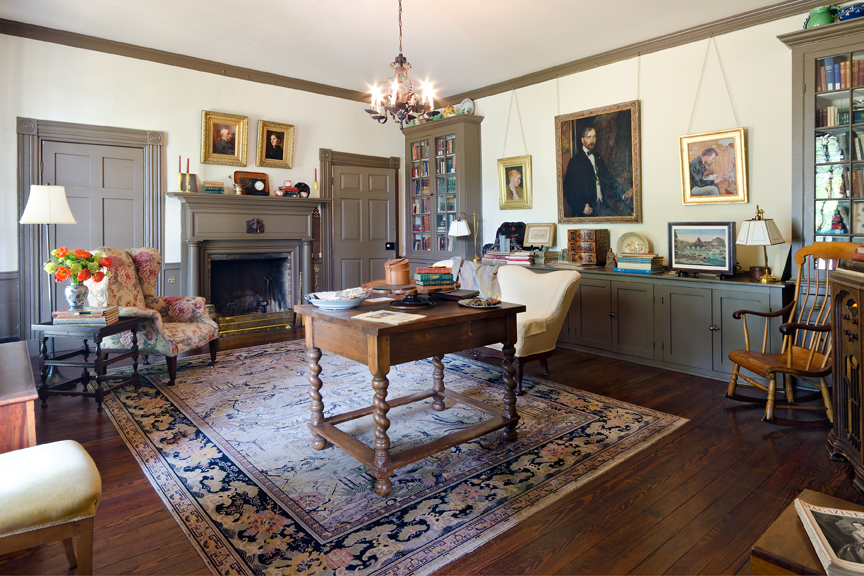 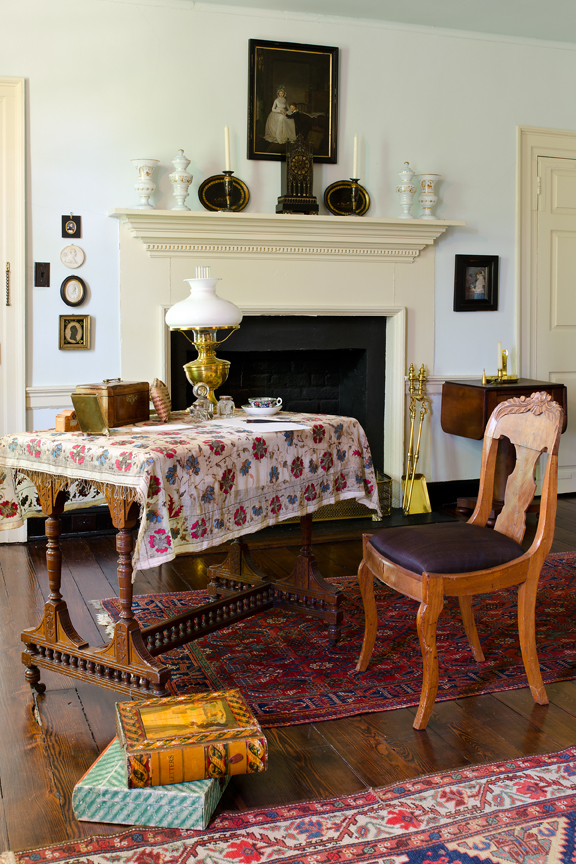 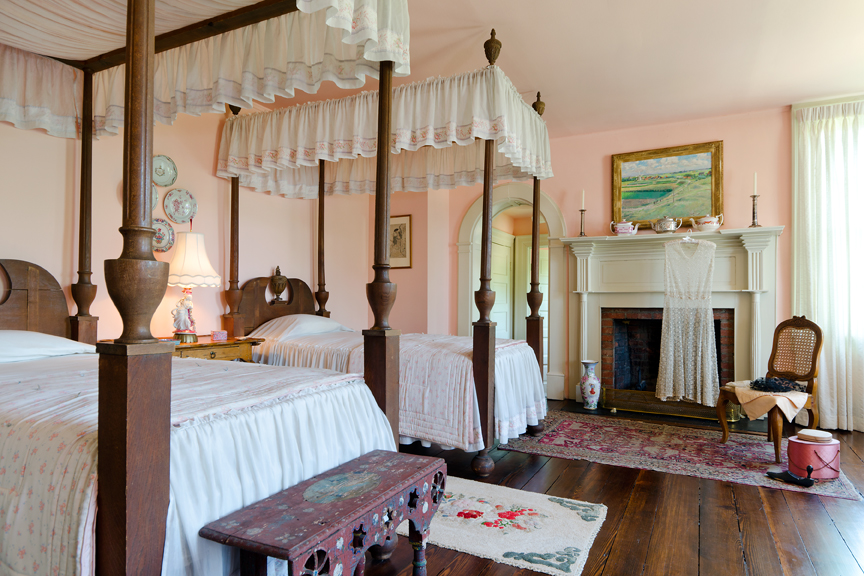 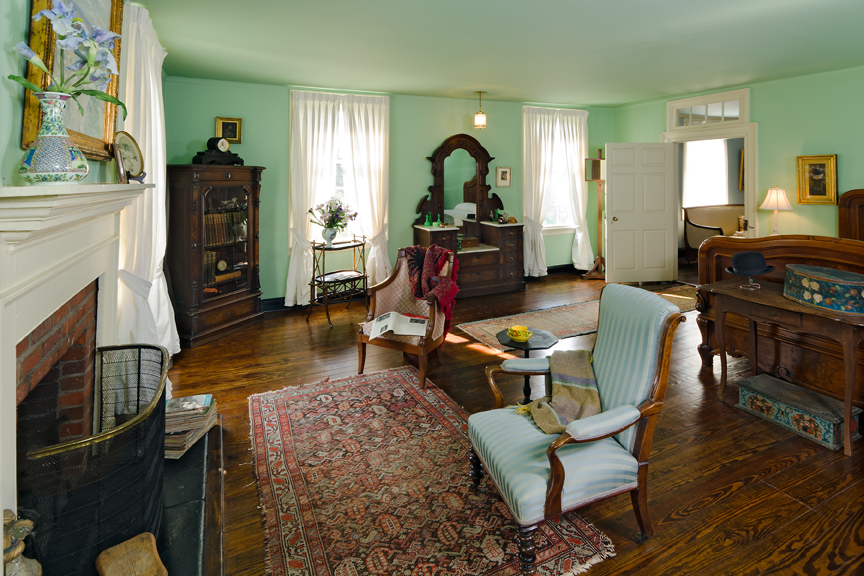 The historic house at Gari Melchers Home and Studio possesses a rich history that predates Gari Melchers. Because the original deed of ownership is lost, the year in which the house was built and the identity of its first owner is not precisely known. But based on the existing physical evidence, the possibilities can be narrowed down.

The original plan of the house consisted of a first and second floor side passage and two rooms upstairs and down to the north (the present dining room, library and two bedrooms) dating to the late 1790’s. Surviving documents inform us that the Horner and Vass families owned the property between 1785 and 1804, so one of those two families must have been responsible for the earliest section of the current structure.

In 1807, Thomas Knox bought the house for his mother, Susannah Fitzhugh Knox. He purchased the first insurance on the house through the Mutual Assurance Company of Virginia. Nearly two hundred years later, that policy is still in effect.

When Susannah Knox died in 1823, a public notice announcing the sale of the property is the first known reference to the name “Belmont.” The buyer was Joseph B. Ficklen, an ambitious young businessman. By 1860 Ficklen was a wealthy miller and banker, owner of sizable real estate, and holder of 27 slaves, most of who were employed at his mills.

At Belmont, Ficklen was responsible for most of the changes and additions made to the house. He raised a family of six children, which might explain the sudden growth of the house sometime prior to 1850. Two first floor parlors (now one large room) were added south of the main hall and two bedrooms constitute the second floor of the addition. Further improvements followed; windows were enlarged and the east and west porches were constructed. Eventually a kitchen and other rooms were added to the north end of the house.

During the Civil War years of 1862 and 1863, the Army of the Potomac occupied much of Falmouth. Ficklen, a Union sympathizer, and his family, continuously occupied the property, benefiting from the protection of U.S. Army General John Gibbon, whom they befriended while the brigade-commander was stationed in Falmouth. Although batteries were placed on either side of the house in December of 1862, it is unlikely that fighting ever occurred on the property.

When in 1916, after ninety-three years, the property passed from the Ficklens to Gari and Corinne Melchers, the house and its surrounding twenty-five acres were considerably run-down. The couple took great pride and pleasure in the improvements made to their “country house.” No picturesque detail was overlooked and every opportunity to provide views of the lawns and gardens from the house was investigated.

A hexagonal sun porch was constructed in 1916 at the extreme south end of the house, in line with the north-south layout of the lawn. Two baths were built above to accommodate the Ficklen-era bedrooms. Melchers added a second story to the west porch, creating a screened sleeping porch, a roof cupola with an attic ventilator, a large attic window, a kitchen porch and a third floor on the north end of the house.

The ca. 1850 wrought iron railing on the east side of the house was installed by Joseph Burwell Ficklen and are an example of a transition in American iron industry. The tall, double-curved Aquia sandstone stairs are crowned with a railing decorated with iron curlicues and white-metal rosettes, topped by brass finials. The railing is a superb example of wrought iron craftsmanship combined with the technology of cast iron that emerged in mid-19th century America. The rosettes are case lead applied to the wrought iron and are thought to have originally been gilded. It is an architectural landmark of historical significance with no equal in the greater Fredericksburg region that encompasses Falmouth, and perhaps even in the whole of Virginia. In 1929-30 the staircase with its wrought iron railing was featured in a seminal photographic exhibition at the Library of Congress on southern architecture, Pictorial Survey-Old Fredericksburg, Virginia-Old Falmouth and Nearby Places, by renowned photographer Frances Benjamin Johnston (1864-1952).

The VAM listing encouraged a more thorough study of the railing in preparation for fundraising to conserve the artifact. A $2,500 study, paid for with funds from the Margaret Walker Purinton Foundation, was conducted by Kreilick Conservation, a respected Philadelphia firm specializing in metal conservation.

Based on his examination of style, materials and workmanship, Kreilick surmised that the railing was probably made in a northern, possibly Philadelphia, workshop in the 1840s and brought to Belmont by then owner Joseph Ficklen, who traveled there frequently on business. No obvious identifying marks can be found, and the workshop cannot be better determined until the conservation work begins, which requires the railing to be removed to a climate controlled conservation lag for further examination and treatment.

In addition, the supporting stone foundation and curved sandstone stairs are in need of major repair as well, and must be rebuilt before the ironwork can be returned and remounted. The museum is currently seeking private funds to restore the railing and steps to their former glory.

UPDATE: The horseshoe railing and related stonework were restored in 2021 with private funds.