This structure is the official capitol building for the state of Mississippi. While this is the current capitol, one other capitol building still stands, commonly referred to as “the Old Capitol,” and it has turned into a museum that explores the history of the site. The new building was approved for construction in 1900, and construction cost one million dollars. The architecture of the building was designed with many smaller details meant to portray the history of the state, including the good and bad. For example, there is a large, gilded eagle that faces south on top of the capitol, which pays heed to Mississippi's past as a Confederate state.

View from the front of the building 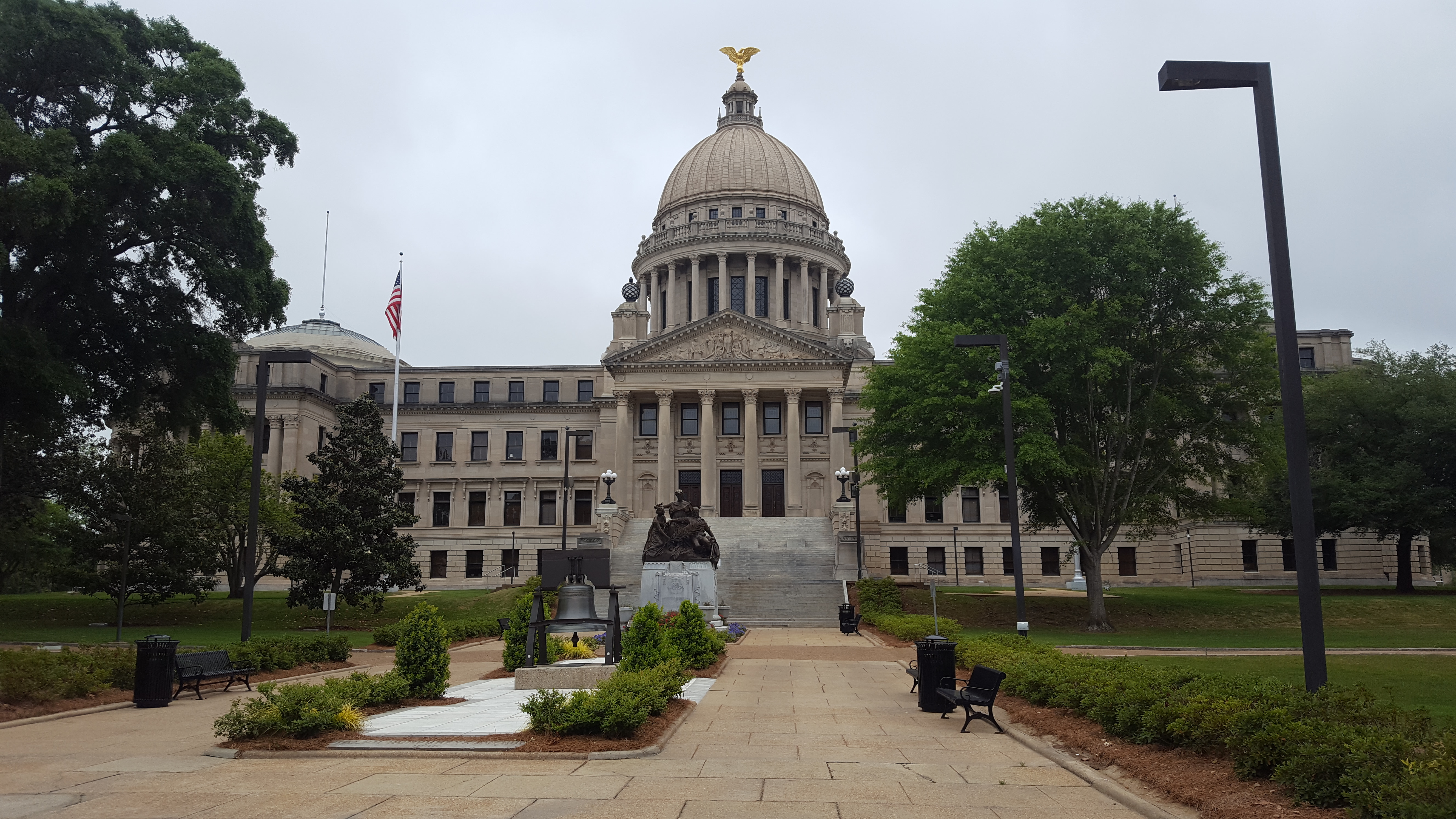 View from the rear of the building 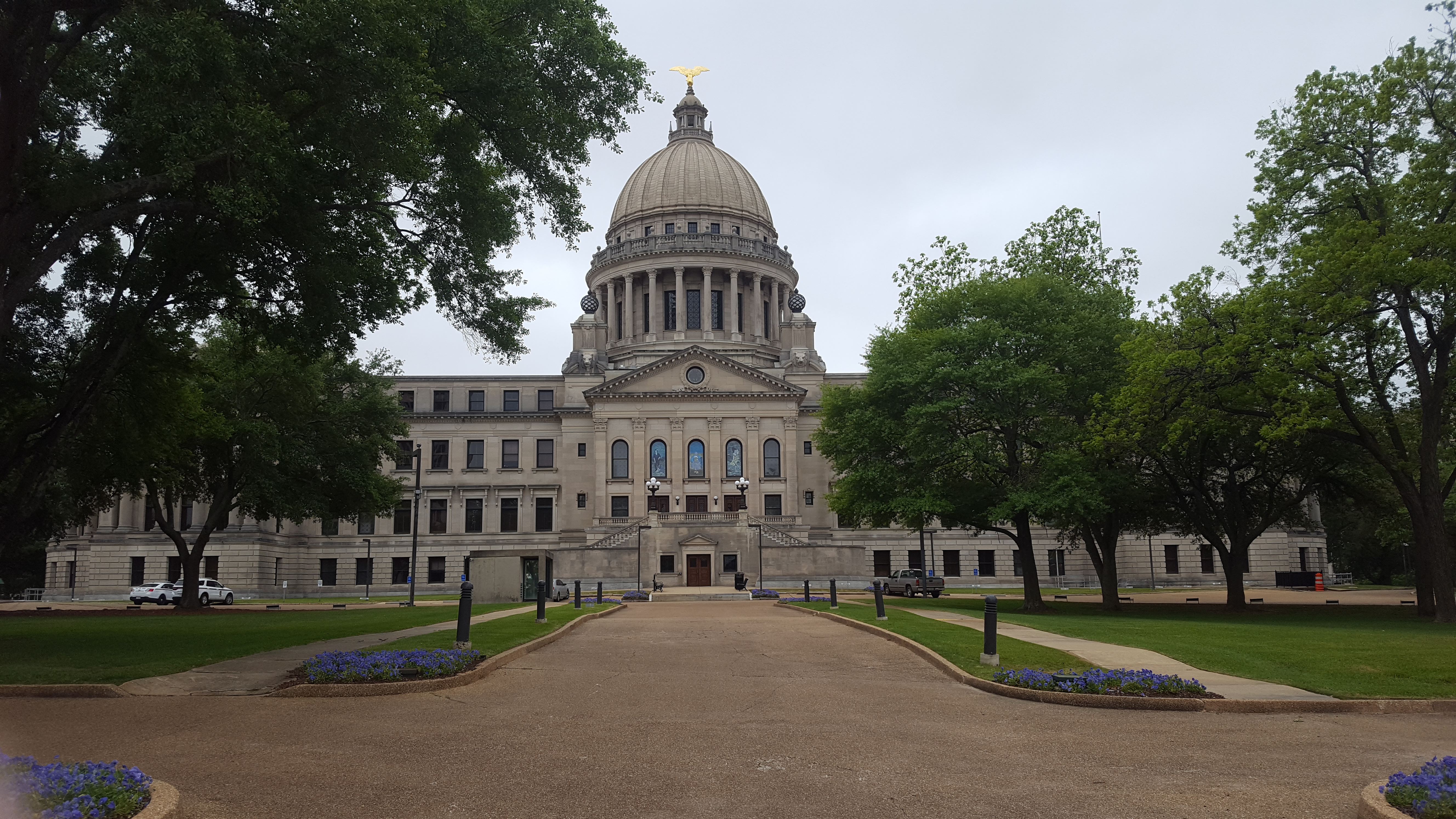 The building in Natchez that was used for the early state legislature meetings. 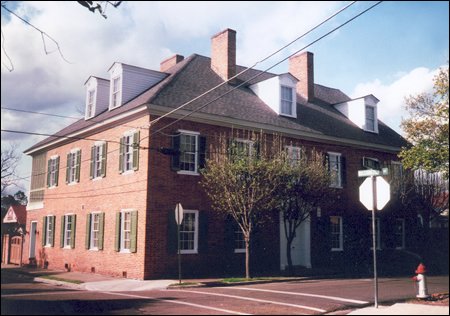 A look inside the new capitol building. 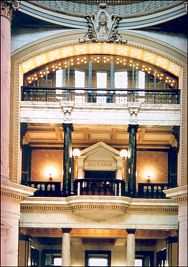 Mississippi began as a territory, ceded from Spain in April of 1798 by the United States Congress. Mississippians chose Natchez as the capital; however, there was no official building built. The General Assembly members held meetings wherever they could, although, these meetings were infrequent since they didn’t have a permanent meeting place. The capital did not remain in Natchez for long; it was moved to a community six miles east of Natchez to a city called Washington. This happened in 1802 when the Republican party gained power and wanted to move the capital away from what they viewed as aristocratic corruption. There wasn’t anything built for regular meetings here, either. After several other moves around the state, it was finally decided to make Jackson, the city named after Andrew Jackson, the seat of the capital permanently. The first actual building was started by John Lawrence in 1844, but the state was upset over his lack of speedy progress and replaced him with William Nichols, only a year after Lawrence started. Nichols finished his building in January of 1839.

The architect who designed the current state capitol is none other than Theodore Link, from St. Louis, Missouri. He was given almost one million dollars, and with this he designed the building Mississippians know as the capitol building. The money to pay for this construction was earned through back taxes owed to the state by the railroad companies. The state capitol building encompasses 171,000 square feet. Various types of marble retrieved from many states can be found throughout the building. There are also many stained glass windows, made in Chicago, Illinois, which add to the natural beauty throughout the entire building. Mississippi’s capitol also houses one of the rare replicas of the Liberty Bell, and a monument honoring the women of the Confederacy. The capitol uses 750 original light fixtures and on top of the dome sits the impressive 8 foot tall, 15-foot wide gilded eagle. At one time. the capitol hosted all forms of Mississippi’s government, but now only the legislative branch works in the building.

The eagle recently went under a restoration project. In 2014, the funds for a major restoration of the capitol were approved, and the eagle was a vital part of the plan. Mississippi hired a company from Maryland to strip the old gilding off the eagle, and then they used three ounces of gold leaf to completely regild the large bird. The eagle needed to be redone because while UV rays might not harm the gold leaf, bird claws and droppings, as well as hail, can be detrimental to the gilded surface. Most state capitols have eagles or some sort of statue on top of the building, but Mississippi’s eagle is slightly different from all the rest because it faces south, while all other states face the direction of Washington D.C. Some Mississippians are insistent on the eagle remaining in its south-facing position.

“Lobbyist John Sullivan works at the capital and noticed it immediately. He remarked that ‘it’s always [his] habit after a storm to look up at the eagle and see just how bad it was… and, sure enough, he was turned a little to the side.’”

On April 30th, 2016, a storm came through and turned the eagle slightly. It was so important to Mississippians that it remained facing South that they hired the use of a helicopter by the National Guard to replace its position.

The state capitol building will continue to be a vital piece of Mississippi’s history as long as it stands. The state has had a long reputation of not being able to agree on where to place the capital, but this is one of the rare instances where the leaders of the state were able to compromise and make something with unique architecture, as well as long-standing, durable design. The work put into this building will not soon be forgotten, as it is an integral piece of Mississippi’s story.