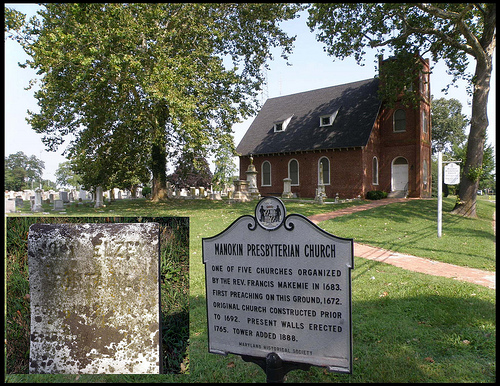 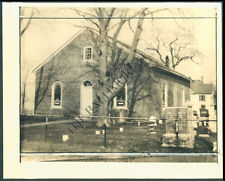 In 1672, a group of Scotch-Irish settled on the Eastern Shore of Maryland. They petitioned to the Grand Jury of Somerset County for a civil permit to hold services of worship and to have their own minister. Finally, their permission was granted and Robert Maddox was the new minister of the Manokin Presbyterian Church in Princess Anne, Maryland. He was to preach on the third Sunday of each month at the head of the Manokin River. In 1680 Colonel Stevens sent a request to the Presbytery at Laggan, Ireland to have an ordained minister. This was granted three years later when Reverend Francis Makemie was ordained. He was a 25-year old minister who was just getting started in his ministry. Under his leadership, Manokin Presbyterian Church, Rehobeth, Pitts Creek, Snow Hill, and Wicomico were organized.

There have also been some remodeling to the Manokin Presbyterian Church between 1872-1873. The mani body have the church has three windows: one on the south wall and two on the north. Each window have double-hung sashes with diamond-patterned leaded glass. The brick of the church was laid in Flemish with a single row of headers that form aches over the windows. The church has a bracketed cornice and a belt that stretches between the ends of the cornice on the east and west ends. The roof was originally covered asbestos shingles, but was remodeled in 1872 with a gable roof. In 1872 during the remodeling, there was also a small addition to the back of the church. The entrance tower that was added in 1888 is three-stories that are divided by belt courses. There is a stepped belt course between the first and second floors, but a bracketed one between the second and third floors. The bracketed course was formed by bricks.

With the Manokin Presbyterian Church comes a cemetery as well. There are a few specific burials in this cemetery, one pertaining to be John Woodland Crisfield. John Crisfield passed away on January 12, 1897. He was a United States Congressman who was elected to represent Maryland's 1st and 6th districts in the United States House of Representatives. He served in the House of Representatives from 1847 to 1849 and then again from 1861 to 1863. He also served as a member of the Maryland State House of Delegates in 1836 and Delegate to the Maryland State Constitutional convention in 1850. If anyone is so eager to find John Woodland Crisfield's gave it can be found at memorial site # 7867973.