Built in 1915, Clallam County Courthouse stands prominently on Lincoln Street in the central business district of Port Angeles. Designed by architect Francis Grant, the courthouse is an excellent example of the Classical Revival style. The two-story building features a large four-sided clocktower that reaches a height of 82 feet, a prominent front entrance with Ionic columns and pediment, and decorative panels between first and second-floor windows. In addition to architecture, the courthouse is significant for serving as the location for county government functions for several decades. It was added to the National Register of Historic Places in 1987.

The historic Clallam County Courthouse was built in 1915 and is a beautiful example of Classical Revival architecture. 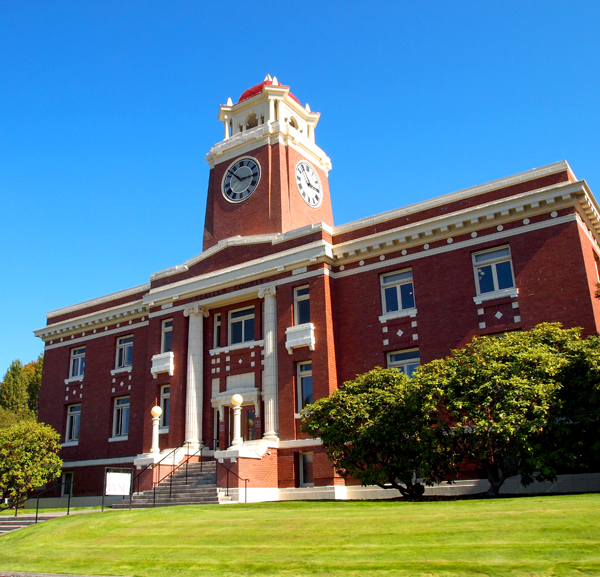 Port Angeles became the county seat of Clalam County in 1890. The county itself was established in 1854 and the seat was first located in the town of New Dungeness beginning in 1860. In Port Angeles, no courthouse was built before the current one. Instead, county government offices moved to different buildings including a church. Construction of the courthouse began in August 1914 and was finished in June the next year.

County government functions operated from the courthouse for 67 years until the modern complex was built behind it in the early 1980s. An enclosed walkway connects the two buildings. The courthouse then became the home of the Clallam County Historical Museum. The museum no longer exists but the Clallam County Historical Society continues to operate and is housed in the historic Lincoln School. The courthouse houses the county Parks, Fair & Facilities Department. It is unclear which other organizations, if any, are also located in the building.