In Harrisburg, PA, in front of the water at N. Front Street stands a Memorial dedicated to the sacrifices Women of Harrisburg made during The Great War. Inscribed on this memorial is “In commemoration of the services and sacrifices of the women of Harrisburg in the World War”. Women served in the war on many different ways. Some women served on the home front, some served in the front lines of combat. The monument itself depicts 8 women on its face, each representing a different role women played during the war including nurse, factory worker, and farmer. Although not much is known about this monument, it remains in Dauphin County as a powerful symbol of the impact women had on World War 1.

This is a picture of the Women’s WW1 memorial in Harrisburg. Notice the stains and fading details with age. You can also see all 8 women depicted in the monument each wearing job specific clothing with one draped in gowns in the center on the chair holding a small angel in her hand. 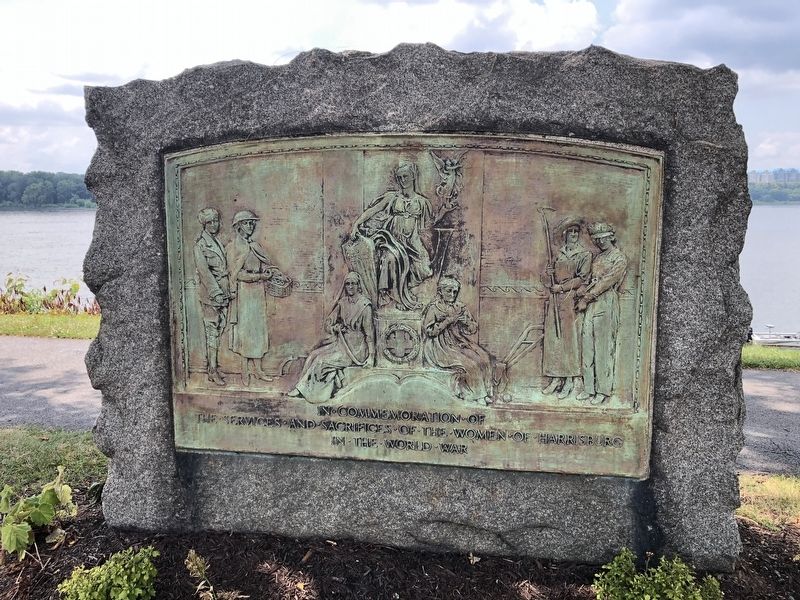 Photo of women during WW1 working to produce munitions for the military. Often times this work was very dangerous and could result in the workers being hurt or even killed. 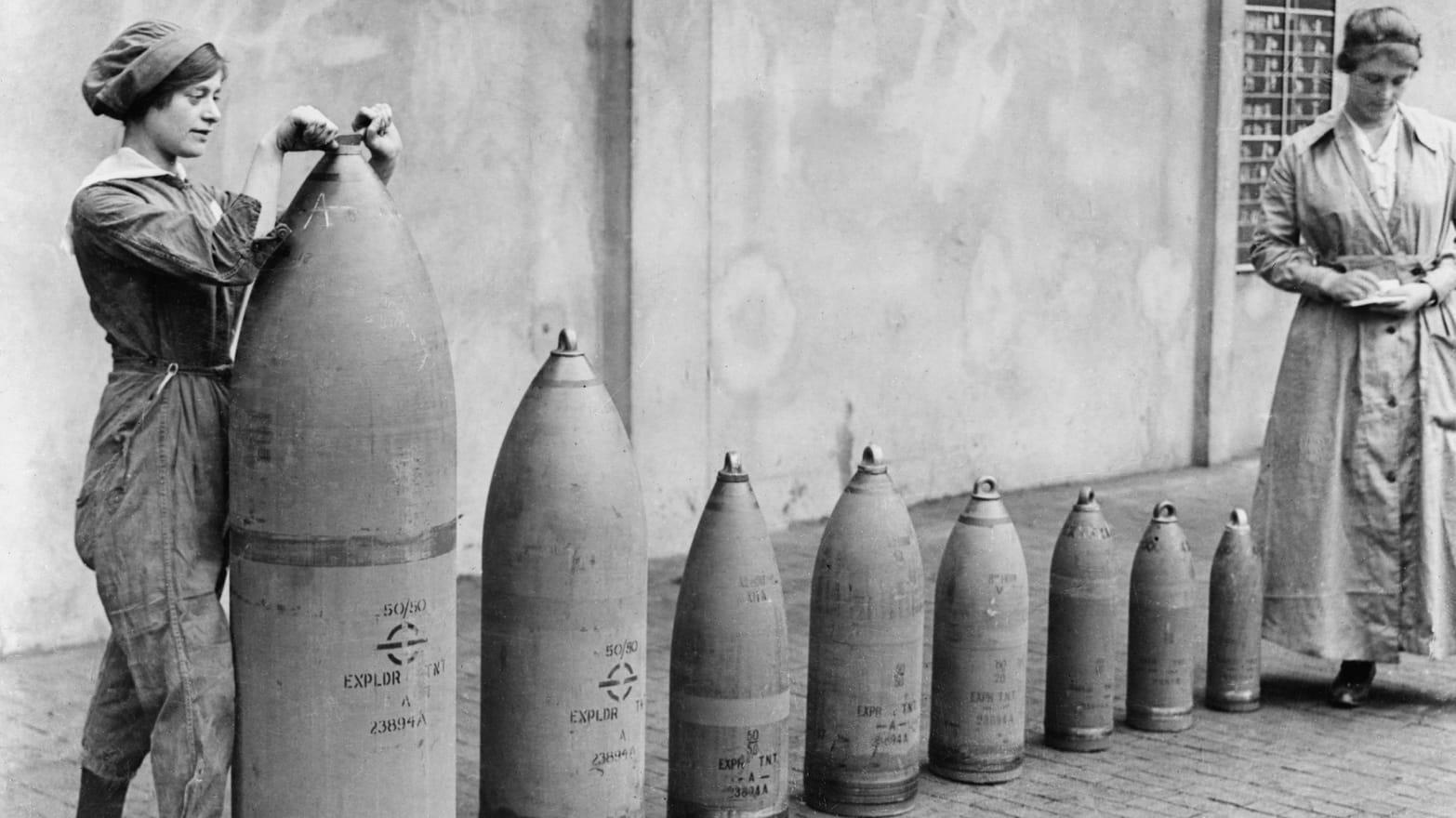 An image of nurses during WW1. Nurses could work anywhere from the homefront to the front lines under heavy fire. They risked their lives and exposed themselves to a variety of diseases and dangerous situations to help injured or sick soldiers. 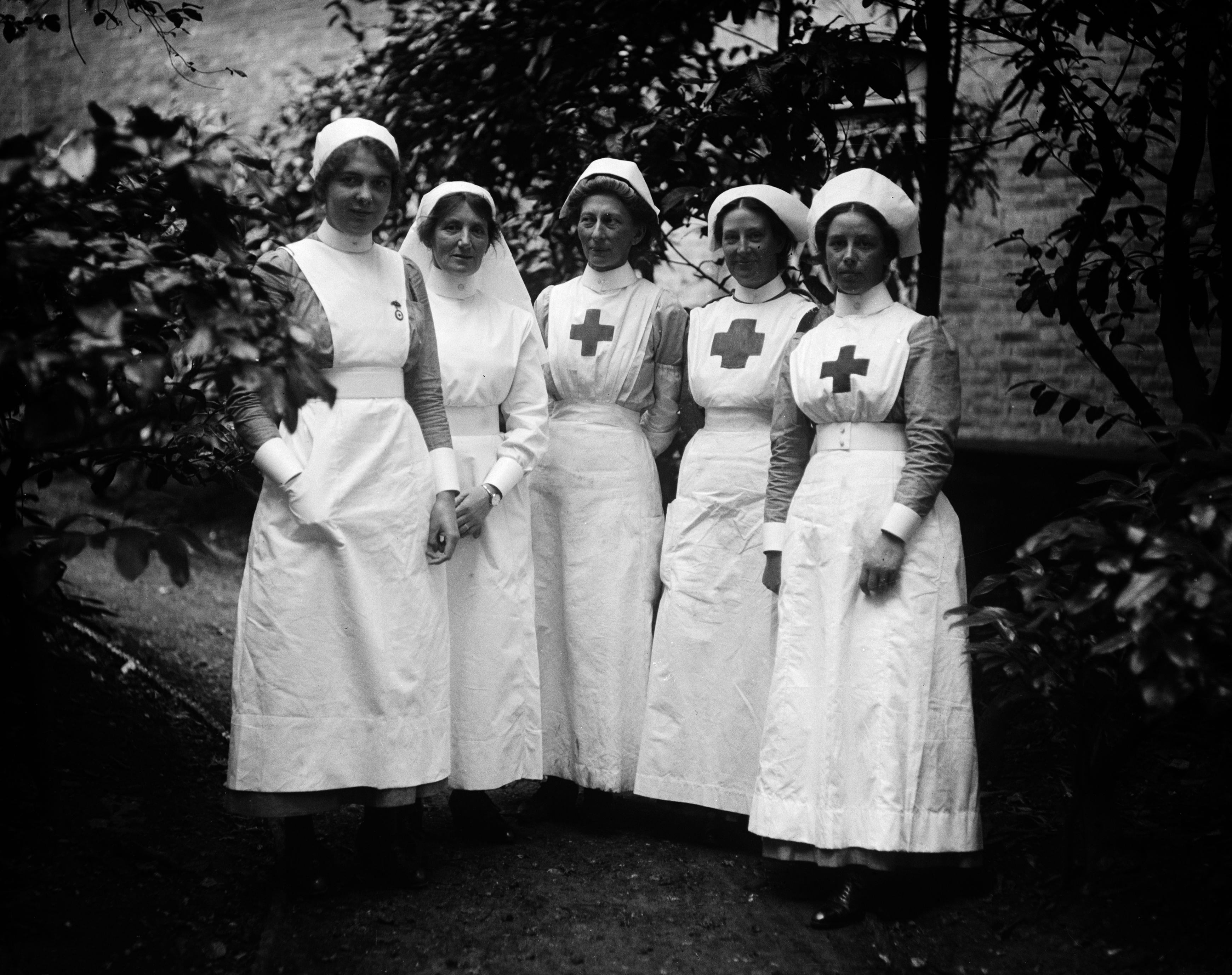 An image dozens of women working in the Post office to keep the United States of America functioning during WW1. 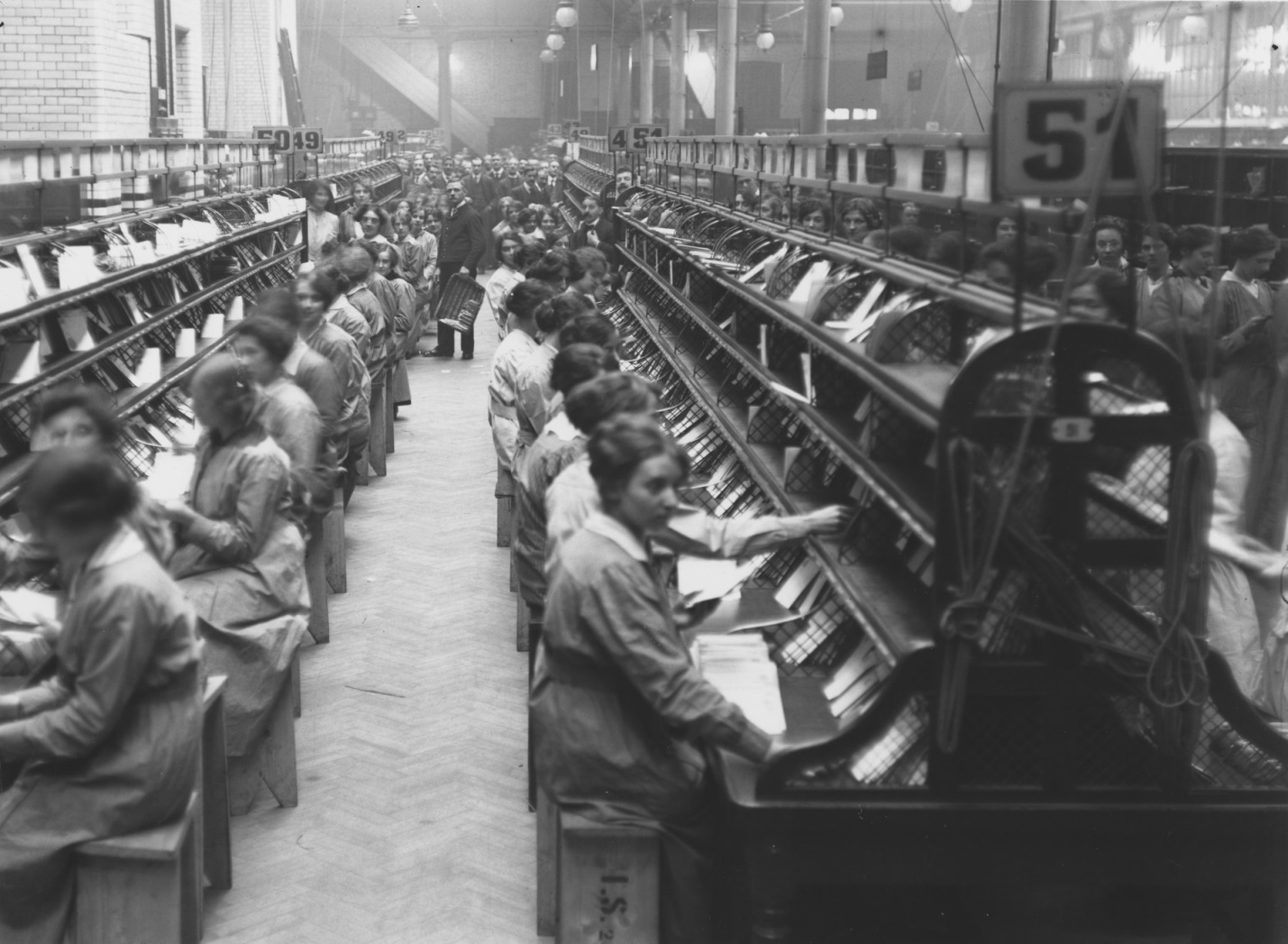 An image of two women wearing a modified WW1 military uniform while making food for soldiers. 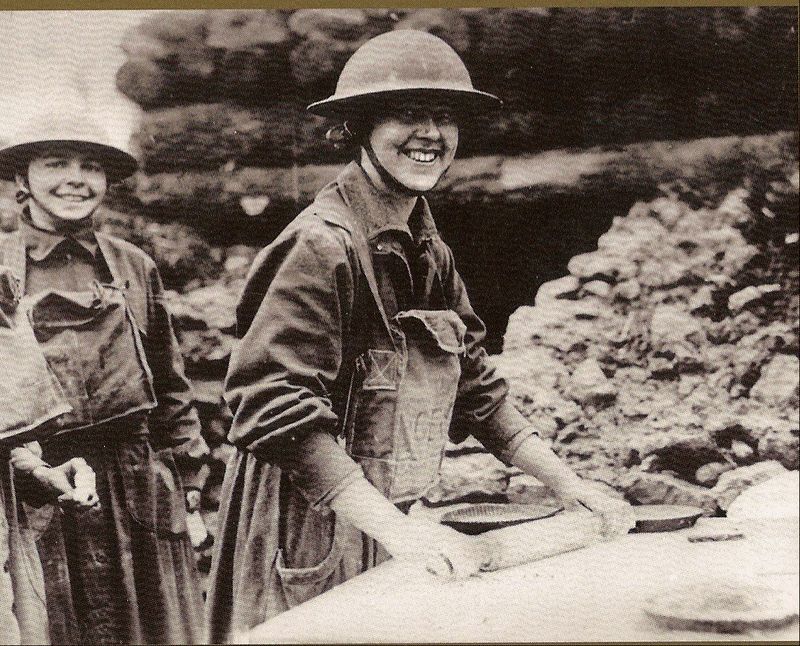 The First World War, also known as the great war, was a never before seen historic event that changed the perspective of war for all times. Along with this, it changed the lives of millions of people living in almost all corners of the globe. Technology advanced faster than ever, men were pulled from their homes and drafted to fight one another on the front line, and the constantly shifting tides of battle weighed heavily on the hearts of everyone involved. While the impact men had on the war and the impact the war had on men cannot be understated, often overlooked is the impact of women during this difficult battle.

With men being drafted to join the military, women were forced to pick up where they had left off on the home front. This lead to women joining the dangerous world of working in a factory. They were responsible for a multitude of things such as producing weaponry, land vehicles, ammunition, and airplanes (1). These volatile working environments put the lives of many women in danger. Women were also responsible for taking up non-specifically war related operations such as becoming phone operators and stock traders. This put a tremendous strain on women as they were also required to take care of their homes during all this. Women still had children that needed to be raised and tended to. Just because they were needed to help with the war didn’t mean that they could ignore their families. One of the most important things a woman was expected to do during the war was to “bolster the morale of their families at home and loved ones overseas” (1). Some women, deciding not to work in a factory, decided to become nurses. These nurses were often times on the war grounds tending to wounded soldiers. Women faced issues such as disease from being overseas as well as direct threat from enemy attacks. Dozens of women lost their lives trying to help the sick and wounded from the front line. Often these women were given military funerals in honor of their work towards the cause of the war (2). Some women even attempted to join the military on the front lines of combat. Some were successful; most others were met with a wall of problems (3).

When trying to enlist in the military, some branches, such as the coast guard and navy, accepted women. But the United States Army refused to allow females to join. Although women faced dangerous situations at home working for factories, the United States Army decided that they would not be letting women join or go into combat. Women such as Ruth Law, who was exceptionally qualified for overseas aviation and combat, were restricted to using their skills to recruit more men for the front line (4). Ruth Law was given an official position within the army; however she was given a modified version of the uniform as she was not permitted to wear the same one as soldiers. The societal expectations put on women caused discrimination during the times of war, however this did not mean that women didn’t find ways to impact the war and influence the outcome.

Women around the globe worked hard to bypass the societal red tape that was placed in their way. Many remarkable women did great things during the war. Women like Elizabeth Knocker who set up her medical tent near the front lines of combat, working often under fire and only leaving once her medical station was gassed by enemy forces, or Mary O’Connell Bianconi who worked as an ambulance driver and spent long hours serving the wounded while under heavy fire from the enemy lines. Along with these women was Elsie Maud Inglis, a surgeon who was told her services were not needed in the war. She set up her own organization and helped heal thousands of injured troops, eventually earning the Order of the White Eagle (5). Women also came together as a whole to host a Peace Congress in 1915 discussing “arbitration, armaments, territorial boundaries, and world organization” (6). Since war had led the men who usually ran the Hague Conference had to cancel due to war, the third Hague Conference was female ran and organized by the Netherlands Doctor Aletta Jacobs. The 1200 delegates in attendance gave speeches surrounding how overseas conflict should be settled in a less violent and more pacified manner. Many women during World War One felt the same way about peaceful settlement of conflict. As Jane Addams expresses, it was seen as unreasonable for men to “believe . . . that there will be great moral effects from this wholesale slaughter” (7). The Women’s Peace Congress fought for peace after war times and had a relatively large impact on the way the end of the war proceeded.

Despite the great impact women had on the war and the suffering women endured during the war to aid the cause, there is still a large under-representation of women in memorials and historical documentation about the war (8). Most war memorials, especially about the First World War, commemorate the soldiers who fought battles on the front line. While these are important, they fail to recognize the sacrifices that women all around the world made in an effort to assist in the war. At the core, the memorials of women reflect the sexist ideals and values of the historic world and “the role women have played or suffered in war in Britain has been met with at best mixed attitudes by the wider society” (8). The Women’s WW1 memorial in Harrisburg stands as a symbol of not only the sacrifices women made during the war, but also the unjust lack of importance often placed on these roles. It illuminates this fact by its relatively lackluster size, and the lack of information available about the decision to have it commissioned or its installment. It is important to always remember and respect the many challenges and sacrifices women faces on all sides and fronts of the First World War.

3 The Women’s Memorial. 2019 “WW1: Women and the War.” https://www.womensmemorial.org/history/detail/?s=wwiwomen-and-the-war