Basketball is deeply intertwined with hoosier roots, but how did it get that way? It all starts with Crawfordsville High school. A town in Montgomery county, Indiana. Crawfordsville is 49 miles away from Indianapolis and played a huge roll in basketballs rise to popularity. The sport was brought back to this high school and then spread like wild fire to hoosiers and their hearts. 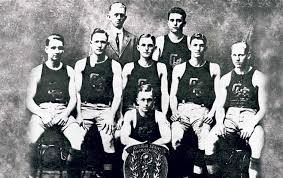 In 1891 Nicholas McCay went to a teaching trip organized by the YMCA and witnessed the creator of basketball (Naismith) teaching the sport. Mccay fell in love with the sport and brought it back with him to his home town of crawfordsville, Indiana. The first organize game ever played in Indiana was on March 16, 1984, between Crawfordsville and Lafayette YMCA's. It is often said that basketball was made for Indiana and Indiana was made for basketball. The simplicity of the game, and the fact that it can be played all year round and inside made it have such a wide appeal to the mid west state that had cold winters. Shortly after in 1911 the Indiana high school basketball tournament was created. In the same year Crawfordsville won the tournament and brought home the championship. Soon after that the basketball craze struck Indiana hard and soon high schools across the whole state kept joining the game and the championships. But it was the schools closest to Crawfordsville who got an early head start that would win the championships in coming years. This area was called the cradle of basketball and it was important in starting the wildfire that was basketball, also known as Hoosier Hysteria.

American Eagle. (2018, August 10). Why Is Indiana So Passionate About Basketball? Retrieved May 04, 2020, from https://aegoals.com/why-is-indiana-so-passionate-about-basketball/