The Fortaleza Ozama was organized in 1502 by the Spanish which had the Taino Indians and enslaved people to build that led to the "the Axis of Conquest" and is located in Santo Domingo, Dominican Republic. The fortress overlooks the Ozama River which it is named after. This fort became one of the oldest military construction of Europe origin in the Americas. Eventually, the fort was restored in 1965 and became a prison and then a public building. Today, it is one of the Dominican Republic's greatest monuments in the colonial city.

Front of the fort 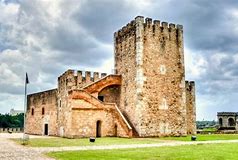 Fort that overlooks the Ozama River 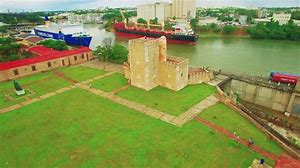 The construction of this fort began in 1502 and was known as the first permanent military base in the Americas that was the beginning of the Spanish colonization. The fort resembles an example of a medieval castle that prevented pirates, Indians, and slaves from invading the area. The fort sets about 69 feet tall that provides cannons on the back of the fort from the attacks. The construction for this fort lasted up to 1508 which was led by the governor Fray Nicholas de Ovando.

The fort became home to many victories throughout the attacks. One of them that is known for, is Christopher Columbus. He became a tyrant and was eventually imprisoned in this fort. The French occupied this fort whenever Spain decided to surrender and give the colony up to the French. After the French occupied the fort, the Haiti army decided to take over. The army was a bunch of former slaves and eventually expelled the French overlords which conquered the colony.

The Taino Indians played an important role to this fort. The Indians were very well developed on an agricultural production. They welcomed Christopher Columbus which Columbus recognized their artwork and how talented they were. These Indians believed everything through hard work and surrounded themselves with creations that would embrace the community. With this strategy, the Indians completed the fort.

In 1937, the fort was under the leadership Rafael Trujillo when the walls of the fort crenellated. In 1965, the fort transferred to a prison and later on became a public building. This fort is well known and is one of the country's well known fort. Many people visit this fort to get a clue of how things were and how it all started.