Our Lady of Guadalupe

This beautiful building sitting in what was the center of the Mexican East Chicago Colonia. The church was originally built in the mid 1920's, the structure served as an important center of cultural continuity. It remains an important corner stone of the East Chicago community and would go under a number of renovations until it arrived at its current appearance. 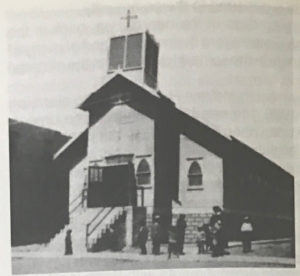 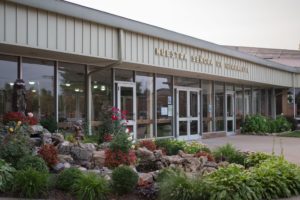 Religion in any community is an important part of the social fabric. For a minority community living far from home it can be an important connection to the traditions and cultures of their home country. Mexicans living in Indiana Harbor did not initially have this connection. For much of the early history of the community, many of the Mexicans living in Indiana Harbor were men working for the steel mills who were single or had left their families behind. All of them saw their positions in the steel mills as temporary, and as such, they did not see a need for laying down any deep roots. However, as their stay in Indiana Harbor became more permanent and families began to trickle in behind the working men, the need for a place to practice their religion, other than the basement of some building, grew.

Our Lady of Guadalupe was the first Mexican Catholic Church to be established in the Indiana Harbor. The original site of the church was the basement of another church, but when fire destroyed the building leaving only enough seats for “200 at a time, and approximately 1000 [parishioners] were seeking admission.” The new church was built with money raised from a variety of efforts, materials donated from local industries, and volunteer labor from local beneficiary societies, Our Lady of Guadalupe became an important symbol for the interconnectedness of the community and to the permanence it was acquiring. The Church would go on to be “not only a religious center but a core around which grew a considerable social and cultural life.” For example, Our Lady of Guadalupe helped organize the earliest baseball groups in the community. These early baseball teams would eventually grow to become significant pillars of the communities.

The church would also play a role during the repatriation efforts during the great depression. Our Lady of Guadalupe and other local churches worked to raise funds to help Mexicans who wished to return to Mexico after having lost work in the mills. It would also help to raise funds for those who chose to stay and struggle through the difficulty of the depression.

Rogers, Mary Helen, "The Role of Our Lady of Guadalupe Parish in the Adjustment of the Mexican Community to Life in the Indiana Harbor Area" (1952). Master's Theses. 1237.

Last updated by Benjamin (Instructed by eric sandweiss, Indiana University--Bloomington) on May 4th 2020, 5:52:01 am.