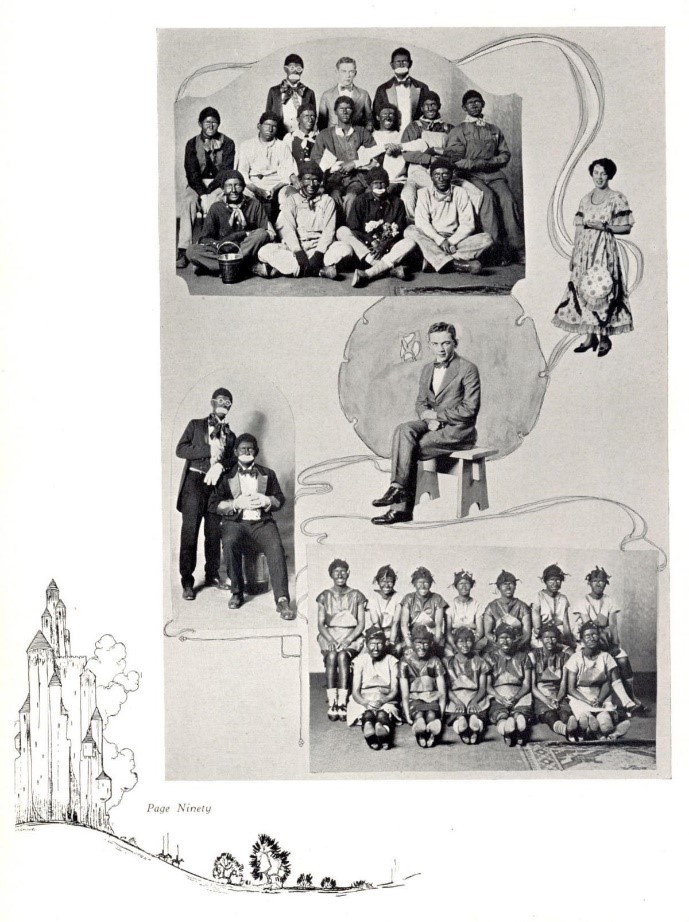 With the public’s newfound interest in the artform, minstrelsy became more and more common in the theatre world, and it was even produced in local schools. In Bloomington High School, students were cast as offensive caricatures of African Americans in the show, mimicking the stereotypical views perpetuated by society. One production the high school put on in 1926 was entitled “Plantation Days” and featured caricatures such as the “pickaninny” and the “zip coon”. In minstrel theatre, the pickaninny was used to perpetuate the idea of unkempt and wild Black children, and the zip coon was used to portray a Black man who attempted and failed to act in the dignified manner of a white man. Students would rub burnt cork on their faces and adopt these caricatures. These offensive stereotypes characterized minstrel theatre in the U.S. and evidently in Bloomington, Indiana. While minstrel shows were enacted in other venues in Bloomington, such as the opera house on Kirkwood avenue or the Princess Theatre, Bloomington High School is an important historic site for minstrel shows as the site emphasizes the racial stigma that pervaded theatre even for young audiences. Racism, as a result of prolonged impacts of the institution of slavery and Jim Crow laws arising at the end of the civil war, was present in the arts at every level: in professional, community, and even educational theatre. It was not until the 1950s and 1960s, with the end of segregation, that minstrel shows fell out of favor with society and Indiana public schools stopped programing this genre of theatre. However, minstrel shows were still seen even up until the 1960s, with Bloomington’s own Arlington Heights Elementary school performing minstrel shows into the sixties. Even with the fall of minstrelsy as a part of school programming, the theatre arts still flourished at Bloomington High School and continue to flourish to this day. This participation in theatre throughout the decades further contributes to Bloomington High School's significance as it clearly represents theatre's impact on youth in Indiana. An appreciation for the arts was instilled in Bloomington's students which inevitably carried over into the professional world, explaining the continuance of the theatre arts in Indiana as productions are well-attended across the state still to this day. Today, Bloomington High Schools have recently produced Footloose, Grease, Thoroughly Modern Millie, and The Wizard of Oz. Their partnerships with Cardinal Stage Company and Bloomington Playwright's Project provide students with the opportunity to experience professional theatre and contribute to the continuance of theatre production throughout Indiana.