Indiana Glass Co. was, you guessed it, a glass company that nearly operated for 100 years. However, it was not the sole glass company in our state, but it is an excellent focal point. This is due to its long tenure as a company that operated in Indiana. Indiana Glass Co. and others like it set up shop in Indiana, not just for the friendly faces, but the massive amounts of gas the state had. 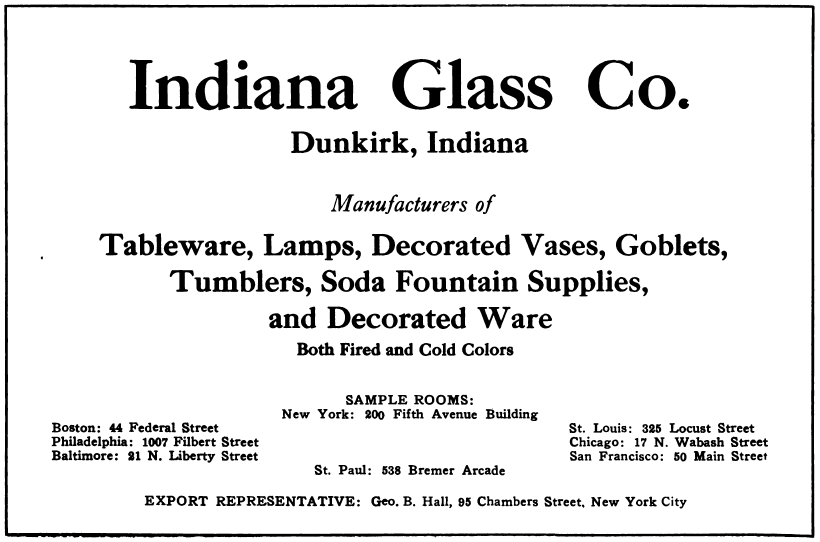 Natural gas played a bigger role than just a fuel source for people’s furnaces. Natural gas was also used heavily in the production of glass product in Indiana, that is why so many glass companies set up shop in the middle of the gas belt. The gas was used to fuel the burners that would superheat the sand so it could be molded into all the glass products people needed. Workers were not coming to places such as Gas city and Dunkirk just to work in the gas fields, but to also find work in the glass factories. Indiana Glass Co. attracted more than 250 workers to their factory, and more to come through its years of operation. This was the case for many glass companies during the time, they were attracting workers by the truck load and moving the work force in a new direction. Indiana Glass Co. was originally penned under the Dunkirk glass plant’s name, but it ended up operating as a sperate entity from Dunkirk. Once again, Indiana saw a shift in its work force towards not just mining a material, but also the production of its own products. Glass production is still prevalent in today’s economy; however, it is not like it once was. After glass production began to slow down, we once again to see the economy take a turn. With the slow down of glass we see the economy look towards a new hope, steel.

Last updated by Wesley Clifford (Instructed by eric sandweiss, Indiana University--Bloomington) on May 3rd 2020, 1:14:37 am.