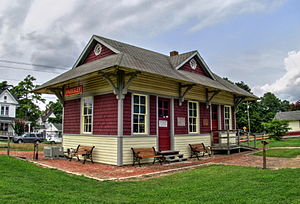 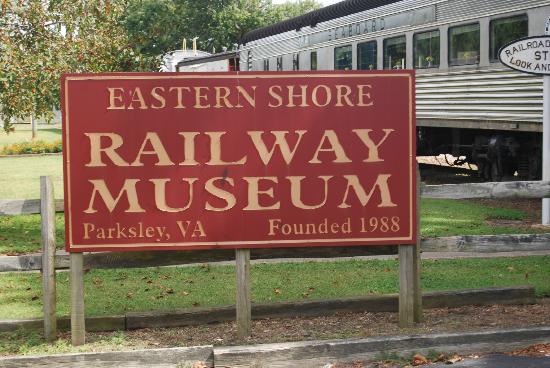 The Eastern Shore Railway Museum was found in 1988 by a planned community in Parksley, Virginia. In1884 the New York, Philadelphia, and Norfolk Railroad constructed a railroad line down the middle of Virginia's Eastern Shore which connected to the Tidewater area. the Town of Parksley wanted to have a station in their area. The original station was built in 1894 and was two-stories high with agent housing on the second floor.  The station was moved in 1906 when a new station was built. Today, the current station was the former station of Hopeton, Virginia and is located two miles north of Parksley. In 1988, the Hopeton Station was donated to the Town of Parksley and at this time the Eastern Shore Railway Museum was formed. This three room structure is the center of the Railway stations.
There are also three buildings that come along with the Eastern Shore Railway Museum: The Maintenance of Way Shed, The Crossing Guard Shanty, and The Fulton Ayres Produce Grading Shed. The Maintenance of Way Shed is also referred to as the, "Tool Shed." It was built in 1898 and was the originial Bert Killian Rail Yard. The Tool Shed served as the maintenance shed from Tasley, Virginia to the Maryland state line. In 1991 the Tool Shed was donated to the Eastern Shore Railway Museum. The Crossing Guard Shany was known as the work station of the crossing guards that were employed by the rail stations. This was prior to the invention and installation of crossing lights and gates. This individuals were sent out to mandate the railroads to make sure they were safe and the routes of the different trains did not cross each other. The Shanty was built in 1898 and was donated to the Eastern Shore Railway Museum in 1991. The Fulton Ayres Produce Grading Shed serves as the Gift Shop for the historic museum. This gift shop also holds many train related artifacts for individuals to purchase. The Grading Shed, was built in 1920 and was donated to the town of Parksley by Fulton J. Ayres in 1992.
The building now serves as the Town Offices of Parksley and is still the Gift Shop.
There are also a few rail cars that are in the historic collection at the museum. The collection includes a stainless steel. 1947 Dining Car, a 1913 Box Car, a 1950s Pullman Sleeper Car, a 1962 Nickel Plated Caboose, a 1949 Wabash Caboose, a 1924 Express Car, a 1927 Observation Car, and a Maintenance-of-Way Car from the 1900s.