The Great Railroad Strike of 1877

A nationwide strike that struck the people of Indiana, the Great Railroad Strike of 1877 affected the lives of those in Evansville, Indianapolis, Fort Wayne, and right here in Terre Haute. While unsuccessful in their demands, the strike helped to lay much of the foundation of the coming labor movement across the US and right here in Indiana, especially in shaping the thoughts of those who grew up in this very town.

Striking Chicago railway workers attacked by troops on horseback in 1877. 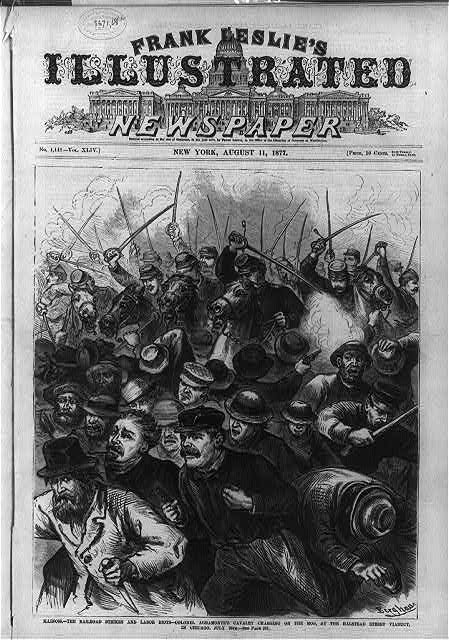 With a depression still in the works during the year 1877, the workers in the US lived in squalor. With wages being cut and already poor working conditions, railroad workers were becoming fed up according to Howard Zinn in A People's History of the United States. This resulted in a series of railroad strikes across the United States including in some of the major cities in Indiana. These strikes resulted in a series of violent clashes between workers, soldiers, local militias, and police officers in these cities and towns. In Indiana, there was concern expressed about violence occurring according to the newspaper The Indianapolis News. They also discussed the news of strikes already reaching Fort Wayne, IN. In general, there was less violence in the strikes across Indiana according to historian James Madison in his book Hoosiers: A New History of Indiana. While the strikes were not characterized by the violence that was seen elsewhere across the country, the media expressed fear that it would occur. Terre Haute was particularly important since it was a site of many railways that crossed through the town. The Workingmen's Party in Chicago was also involved in organizing some of the strikes and demanded that the railroads be nationalized. The party was made up of many immigrant men and was also located in St. Louis, Missouri, in which the workers almost had a chance to turn the city into a workers' paradise, where they controlled their labor. Karl Marx was even intrigued by the event, claiming in a letter to his friend and co-writer Friedrich Engles that it could lead to a strong workers' movement in the coming years. While these strikes were eventually put down, the next few decades would see a struggle for workers' rights, the likes of which had never been seen in the US before. These violent actions were not supported by a young Eugene V. Debs who defended the Brotherhood of Locomotive Firemen against claims that they supported the violence. That being said, his views were somewhat changed by the writings of the people who saw a better future for workers on the horizon, along with the rise of more strikes by the railroad workers. These ideas about workers' rights were being cultivated in Terre Haute at the time through the likes of Debs and the unions. This strike certainly influenced how Debs and others organized strikes to come like the Pullman Strike of 1894, which is our next stop.