This location was the epicenter of the Pullman Strike of 1894, where workers for the Pullman Company went out on strike to ask for lower rents and higher wages. This event culminated in a nationwide strike where the railroads stopped almost completely, leading to the arrest of many of the leaders including Eugene V. Debs.

Troops helping the Pullman Company by letting the trains run. 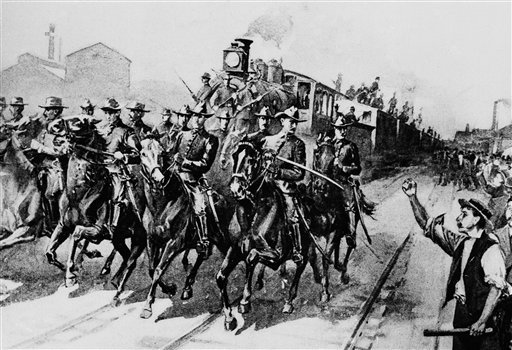 With economic anxiety increasing during the 1890s due to the Depression of 1893, which lasted for several years, workers were facing the brunt of the hardship. Companies were cutting wages, including the Pullman Company, which operated a company town outside of Chicago. The rent and price of food were going up for the workers, while the wages were going down. Due to this the workers decided to go out on strike in June 1894 and asked for the help of the American Railway Union, who among their leadership was organizer Eugene V. Debs, from Terre Haute, Indiana who had seen the Railway Strikes of 1877 first hand in his hometown. The union decided to help the workers, by telling "its members all over the country not to handle Pullman cars" according to Howard Zinn in A People's History of the United States. These actions lead to the standstill of the railways and the mail across the United States. Strikebreakers were sent in, but that did not deter the strikers. Due to the mail being stopped, the US government had a legal argument to break the strike because according to Zinn, "federal mails were being interfered with." President Cleveland had troops sent into Chicago, while strikers burned Pullman cars. A mob clashed with the troops leading to the death of 13 people on July 6th. Many were arrested that day including Debs. This event puts into perspective the Great Railroad Strike of 1877 because both strikes ended up failing. With that being said, things were going to start getting better for the unions and workers at the turn of the century, with significant gains soon to be made in Indiana and around the US. The strike also was a lesson for Debs, who wrote extensively on the subject. In an essay titled Political Lessons of the Pullman Strike, Debs argued that this event showed him the strength that the government would impose on the workers to stop their demands. The strike had a profound impact on him and further radicalized him while he was in jail. The site that we see today looks very different from the place that the workers knew in 1894. While there are still definitely railroads that run through the former company town, the area is mostly marshes and grassland, with housing to the west side. There is also now a golf course in the area, which the workers would probably find odd if they were to be there today.