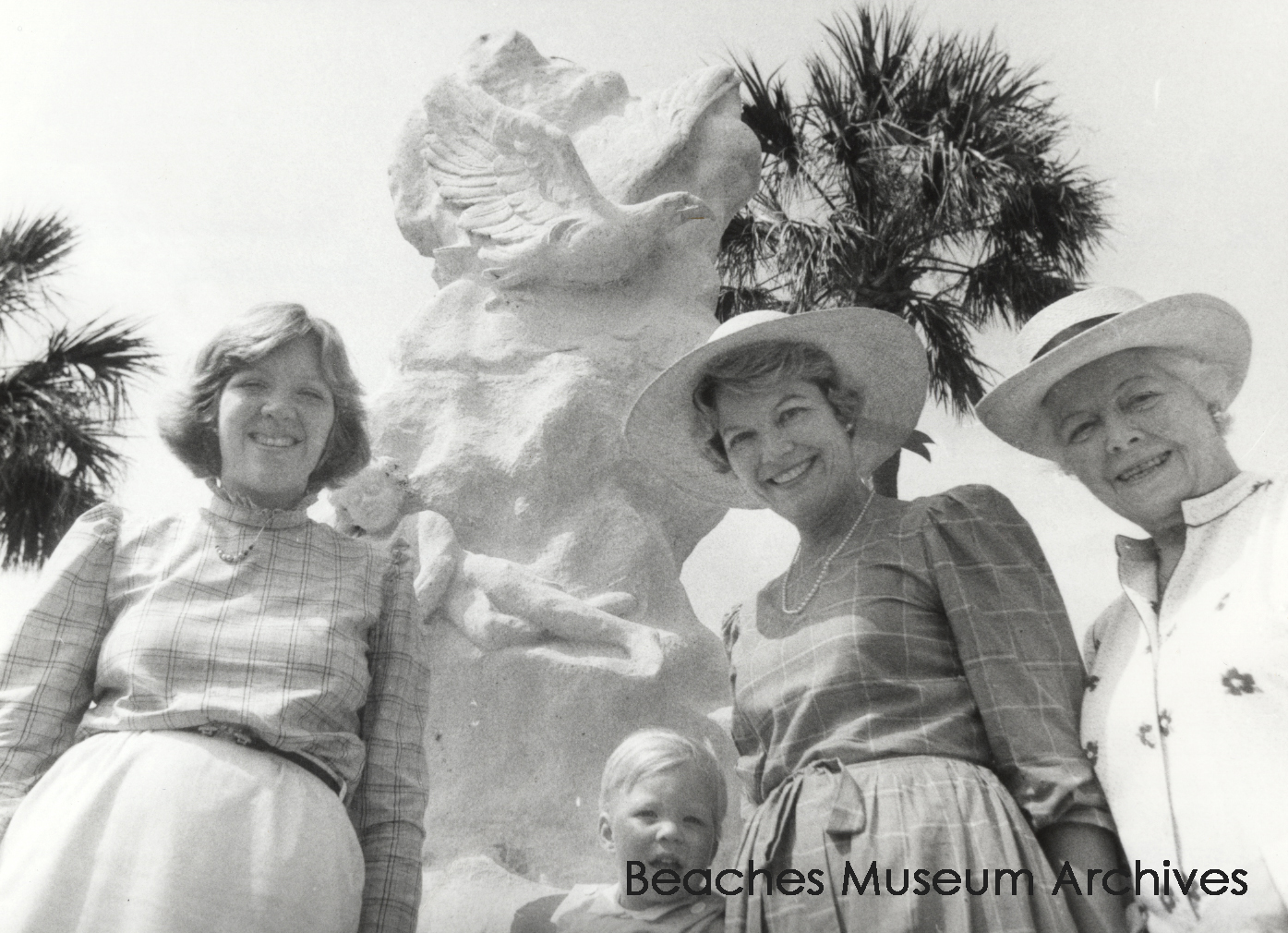 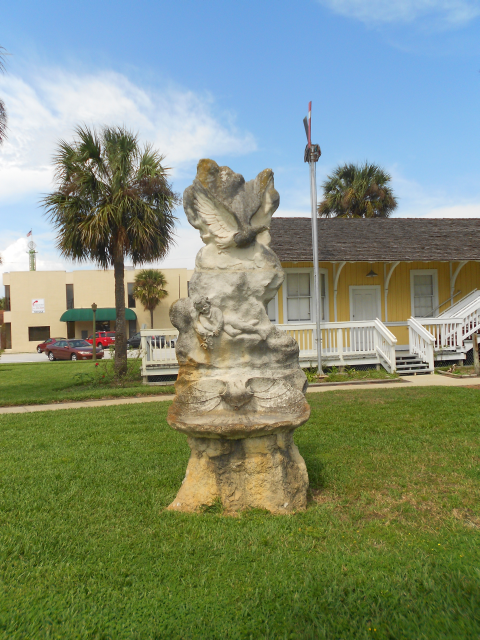 Dedication on September 17, 1932 in its original location. Colonel Stehlin is holding a baby in the foreground. 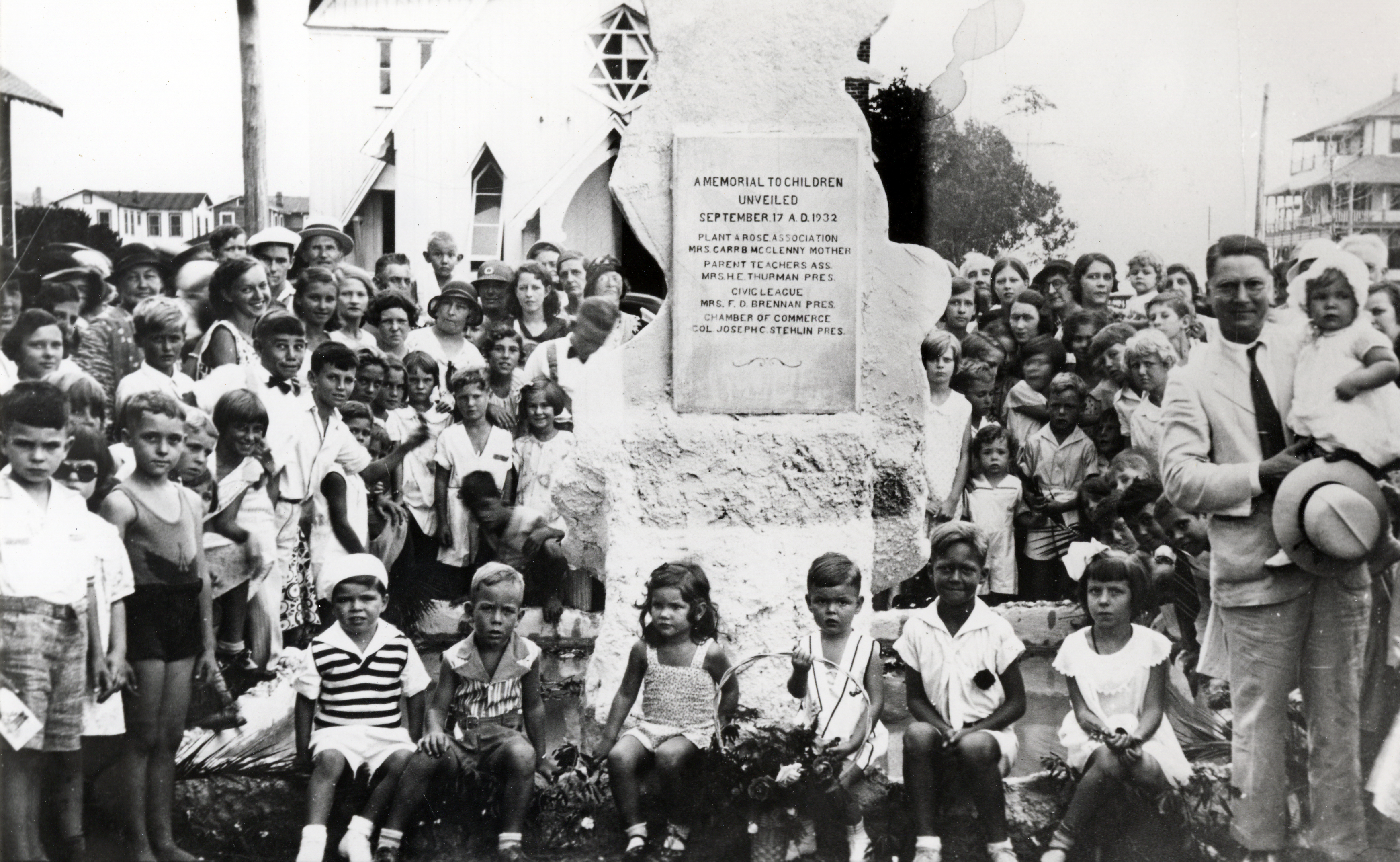 During the “Saturday in the Park” event on April 28, 1984, the Beaches Area Historical Society proudly unveiled and dedicated their newest acquisition: the 1932 Lindbergh Baby Memorial. The jagged, off-white, stone carving makes it one of the more unique historical objects that the Beaches Museum possesses. Towering at 10 feet high, the stone memorial depicts a cradled child above which an eagle is poised in flight.

The dedication of the memorial represented another step in growth for the Society, however; the memorial itself represented a time of mourning. The kidnapping and death of Charles Augustus Lindbergh Jr.–the infant son of the famous 1920s Pilot Charles Lindbergh and wife, Ann Lindbergh–sent shockwaves across the nation and even into Jacksonville Beach. Not long after the news broke of the discovery of the child’s lifeless body on May 12, 1932, Jacksonville Beach resident Kate McClenny sought a means of commemorating the tragedy. McClenny, president of the Plant-A-Rose Society (the forerunner of the Garden Club) collaborated with the president of Jacksonville Beach Chamber of Commerce, Col. J.C. Stehlin. She initially suggested that “a mound of shells be gathered by the school children as a tribute.” The state was created by the Cianca family, Italian immigrants to Jacksonville Beach.

The commemorative statue itself was later unveiled on September 17, 1932 on the grounds of Jacksonville Beach Elementary School #50 at the corner of Second Street and Second Avenue, across from the then St. Paul’s Episcopal Church, where Pablo Towers sits today. With the help of Daisy Brennan, president of the Beaches Civic League, later the Beaches Woman’s Club, and Mrs. H. E. Thurman, president of the PTA they organized a ceremonious unveiling. Children of the Beaches Area brought sea shells and other items they treasured to lay at the base of the monument.

In 1971, the memorial was nearly destroyed when the school was demolished. There is still question as to where the memorial was relocated to and who possessed it before the Society acquired it in 1983. There are several stories that account for the 12 year gap in the memorial’s whereabouts. One story tells of how Charles Newberry Moore Jr. of B. B. McCormick & Sons Co. saved the memorial from a wrecking ball when they were tearing down the old Jacksonville Beach Elementary school. A second account details how the memorial sat in a small park on Penman Road where the old Women’s Club met. The third story was that the city called the Society about a“mysterious” sculpture with a 1932 plaque set to be destroyed. The final rumor specifies it sat in a city storage area called the “Graveyard.” Wherever the memorial sat in limbo, J.T. McCormick somehow got word of the memorial. After acquiring it, the Society allowed it to become a Boy Scout’s restoration project and relocated it to the Pablo Historical Park in late 1983 so they could ceremoniously rededicate the memorial in 1984.