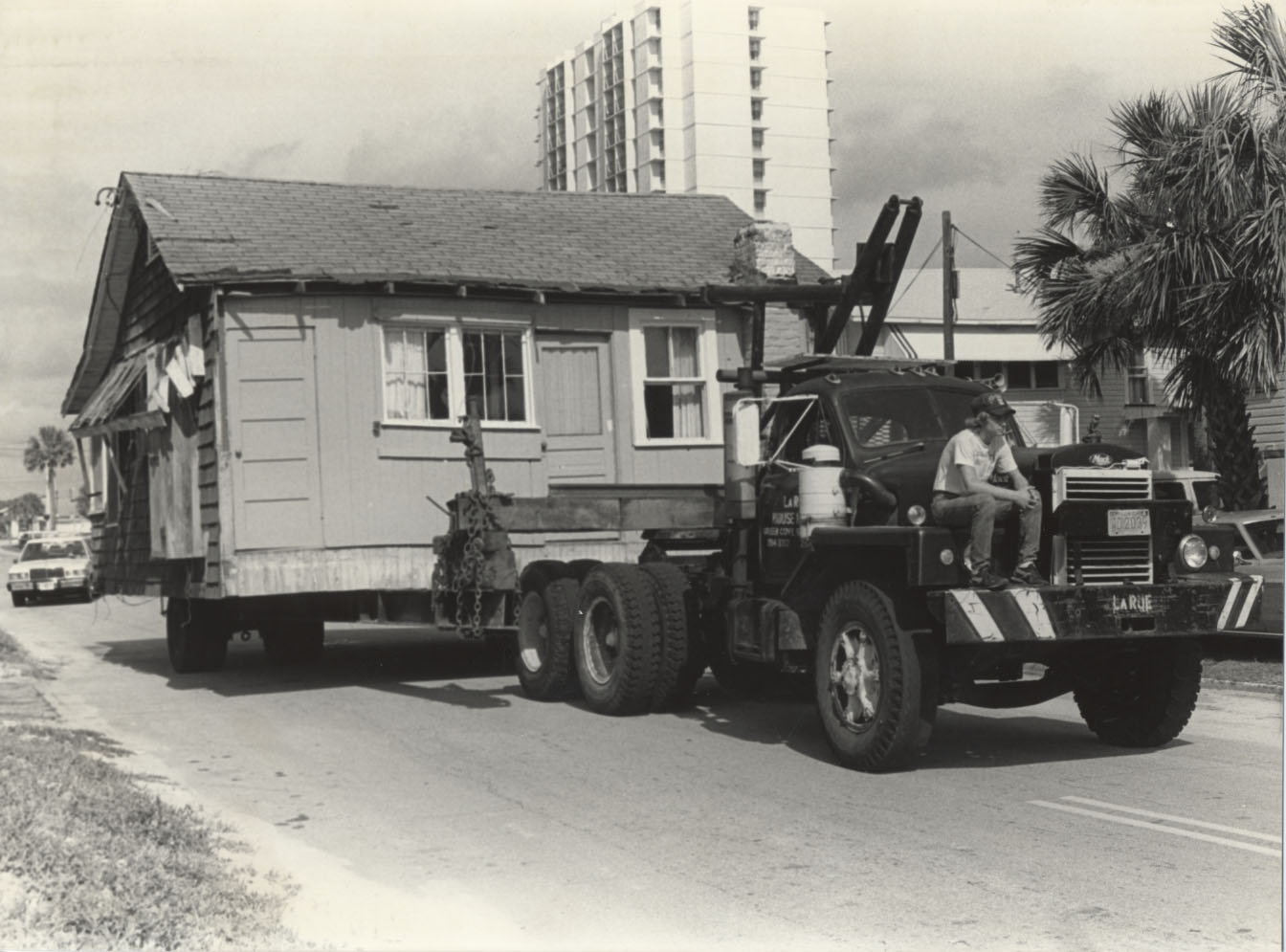 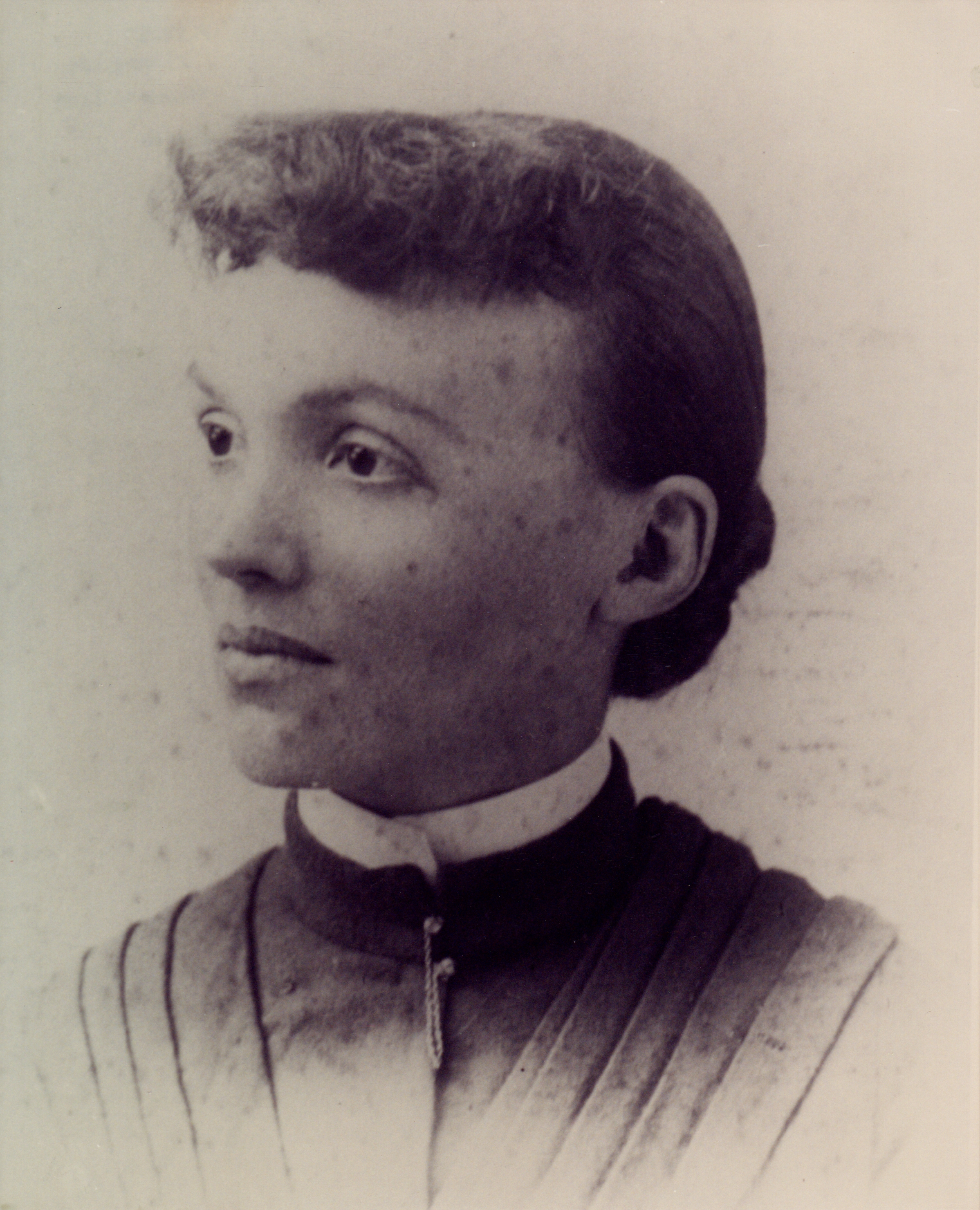 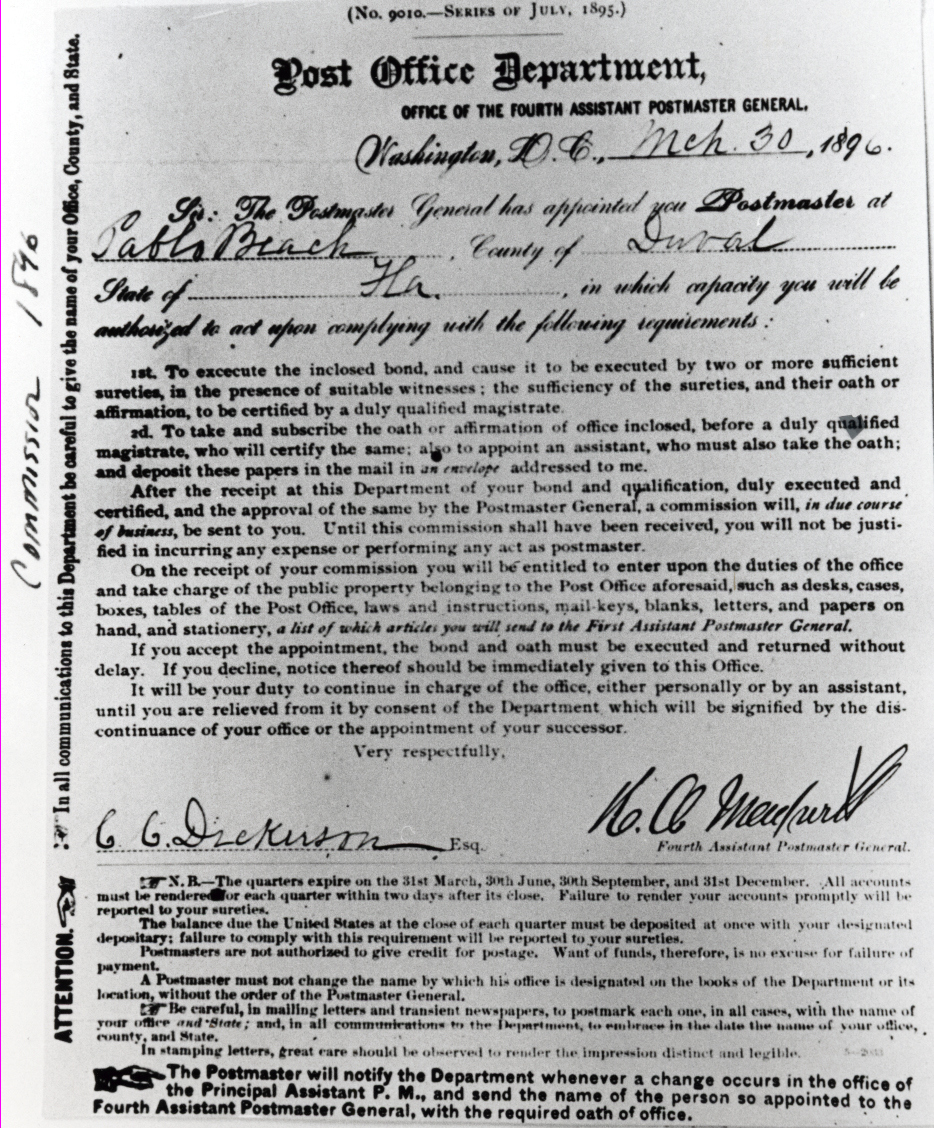 In 1959, the U. S, postal service launched its first “mail missile’. The projectile, laden down with three thousand letters, was sent from the Barbero submarine, which was located off the Florida coast, to Mayport Naval Base in Jacksonville, Florida. Although this mode of transportation never really caught on, the “mail missile” was a testament to the capabilities of the US military in post war America. 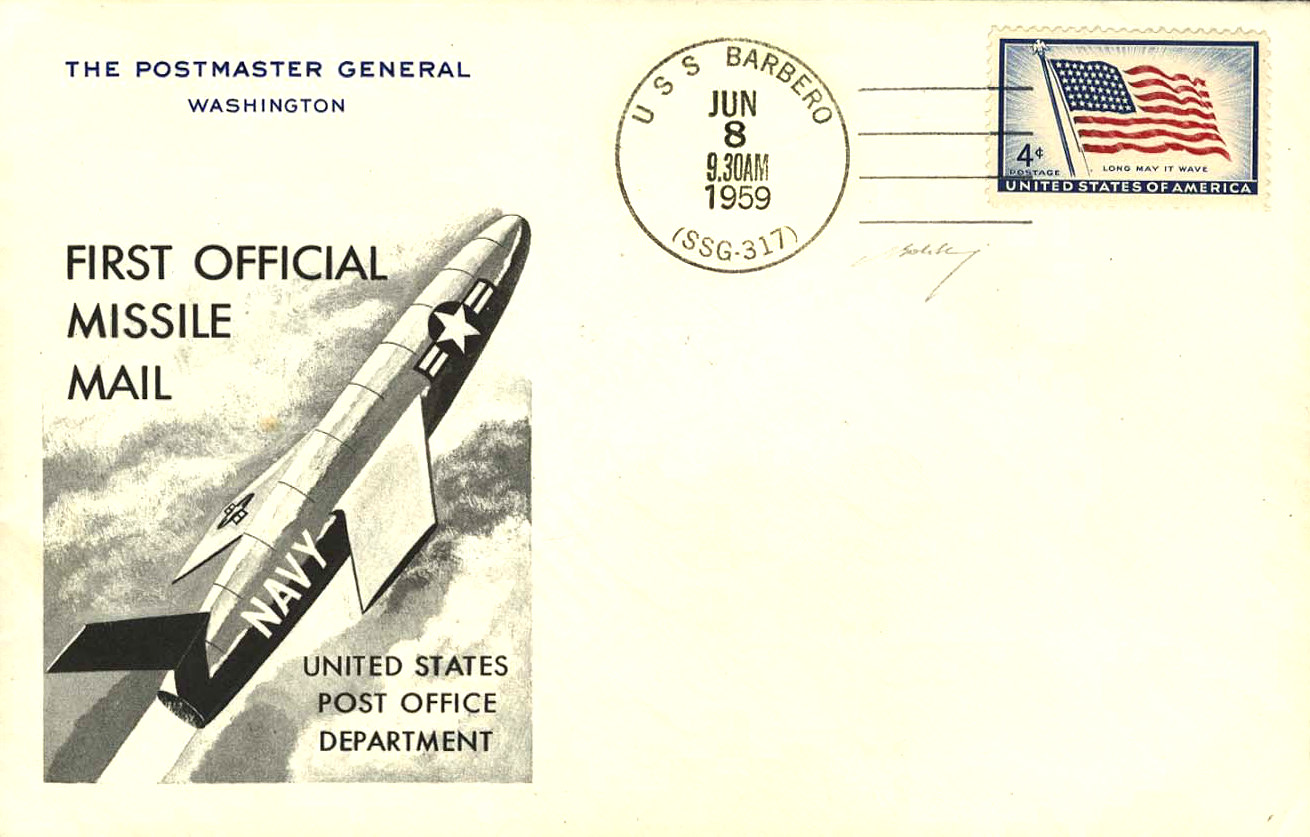 Weighing postage has always been a part of the federal postage system. Postage scales, such as this Pelouze Postal Scale, were used to gauge the weight and dimensions of packages. Prior to 1913, sending packages from one place to another was not a common practice. Orders above four pounds were delivered by private express companies, not by the post office itself. Post Offices typically charged one cent per ounce when delivering a package, identifying its weight was necessary to determine the cost of delivery. This system would change in 1913, and as a result of legislation in congress under Roosevelt, these packaging fees were greatly reduced. This scale was used in Atlantic Beach by postmaster Adele Grage. 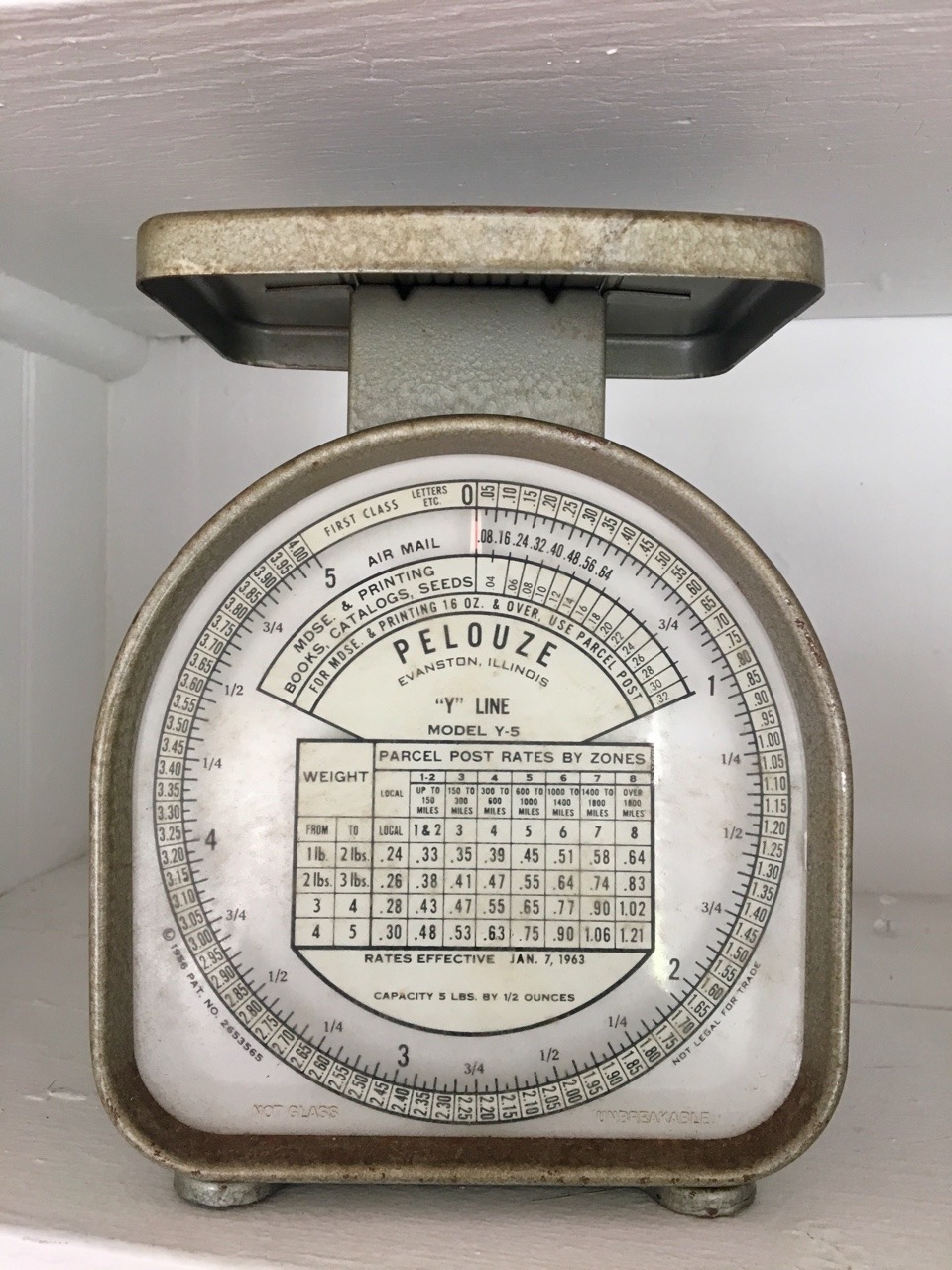 In 1884 entrepreneur John Christopher began developing what is now Jacksonville Beach. His plan was to build a railroad connecting Jacksonville to the undeveloped beach front, as well as building a luxury hotel. Since the beach had no buildings yet, tents were used for housing and administrative purposes, including the post office. Eleanor Kennedy Scull served as the first postmaster, running it out a tent primarily used as a general store.

By 1886 the Jacksonville and Atlantic rail line was completed connecting South Jacksonville to Ruby Beach (later to be renamed Pablo Beach). Christopher also built the luxurious Murray Hall Hotel at the oceanfront and the post office moved into the newly constructed hotel. In 1890 the Murray Hall Hotel burned down and postal service was carried out in other local businesses, including the Dickerson’s General Store. Celenia Columbia Dickerson was postmaster from 1896 – 1909.

In 1902, Dickerson paid for the construction of the first stand-alone post office building in Pablo Beach. She remained postmaster through the entirety of the building’s service, from 1903-1908. After Dickerson’s retirement, postal services were relocated to yet another store. The building was re-purposed for private use. By 1917 it was moved to Second Street South and used as a home addition.

This building was relocated for the final time here, to the Pablo Historical Park, in 1986 by Scott Chandler as his Eagle Scout Service Project.