Constructed during the years 1856-1859, the Gothic Revival style structure known as Leland Castle once served as a large country estate, belonging to a wealthy hotel entrepreneur, Simeon Leland. With the death of Leland's wife in 1880 the house ceased being a private home and has seen many uses up to the present with the most recent being part of the campus for the College of New Rochelle. In 2019 the college had to close its doors due to financial circumstances. The campus, including the structure, was purchased by Freemasons and the building's future is uncertain. 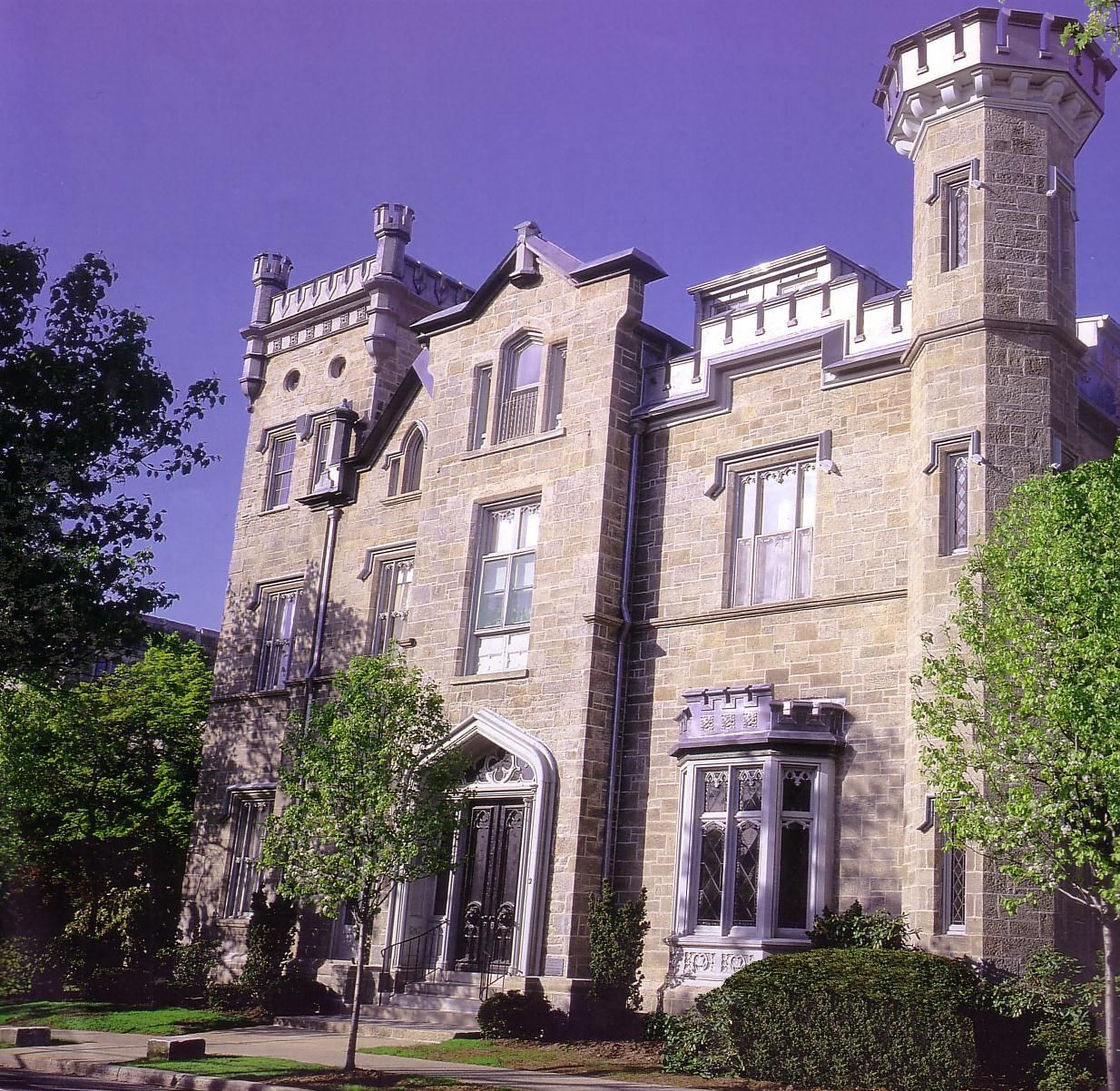 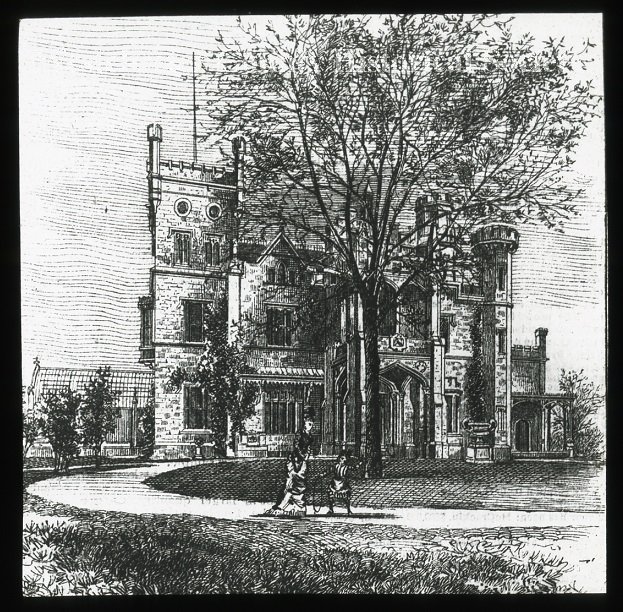 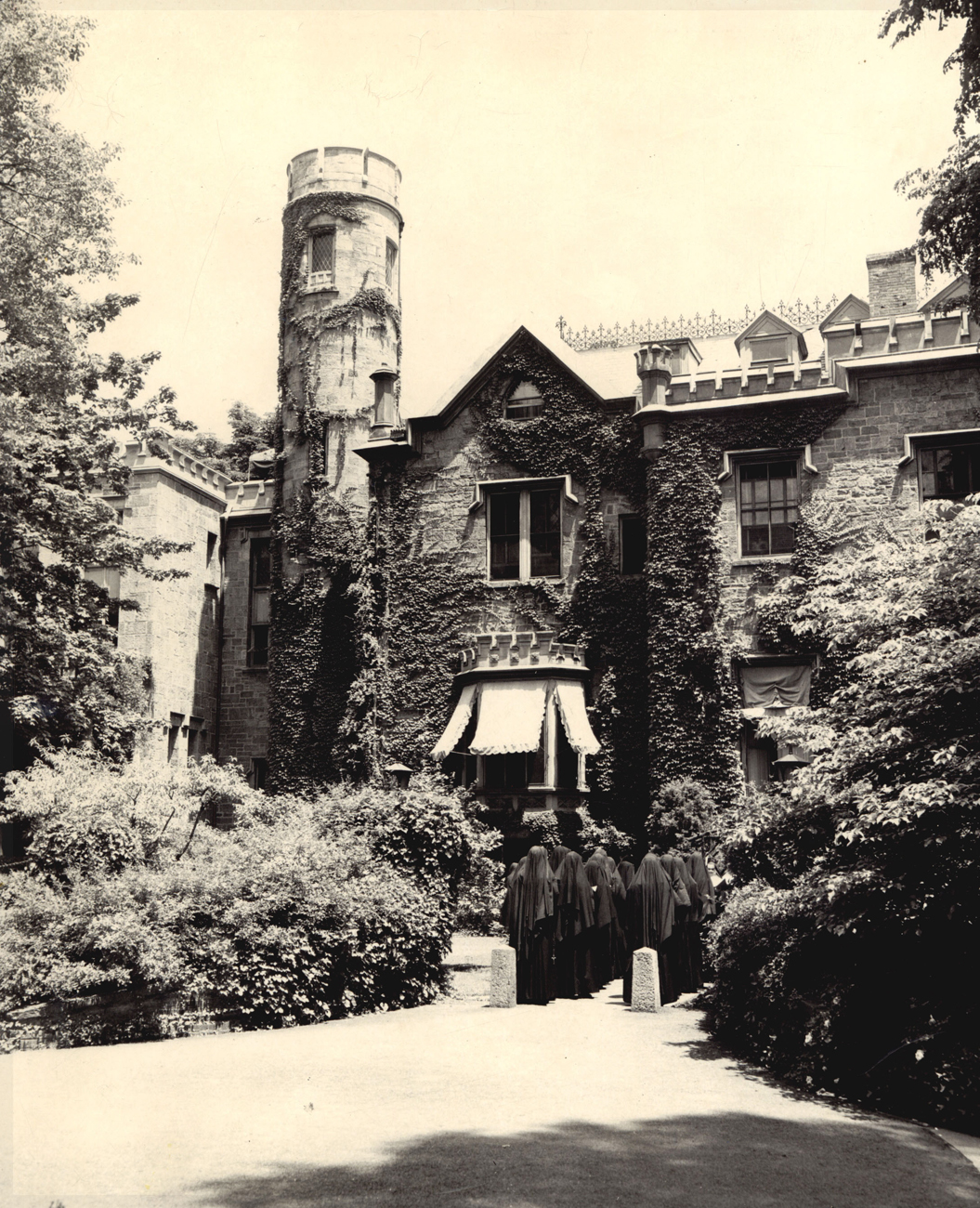 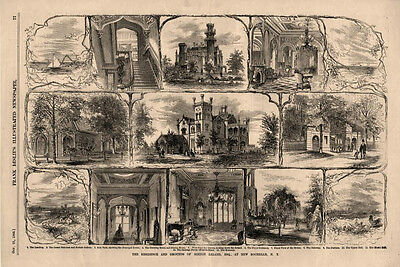 In 1848 Simeon Leland, one of five successful sons to a family of Vermont innkeepers, purchased 40 acres of land in New Rochelle overlooking the harbor to build his new luxurious home. Simeon, born in 1816 would acquire his wealth through hotels in New York City. Notably the Metropolitan Hotel, "renowned for its luxurious furnishings, attentive service, and French cuisine."1

In 1855 Leland hired city architect William Thomas Beers to design his home. Leland requested an “English castellated Gothic edifice.”2 “Beers obliged with a fanciful and elaborate plan, extensively ‘castellated’ with towers, turrets and battlements.”3 By the time of its completion, the massive structure featured 60 unique rooms.

“The original main structure is a two and a half story approximately rectangular building 130 feet wide by 88 feet deep. Its load bearing walls are constructed of broken course, cut granite masonry. Its Gothic Revival exterior is enhanced on the southeast corner by a tall square tower, on the northeast by an hexagonal one, and on the northwest by a round tower 100 feet in height, each with crenelated galleries.”

While the exterior of the building created an impressive sight within the town of New Rochelle, the interior is no less fascinating. While many residences of this time period were fashioned in the Renaissance style, this structure maintained its Gothic decor. For example, “the main entrance on the eastern facade is framed by a Gothic pointed arch. Tall, Black walnut doors ornamented with lion’s heads are flanked by slender sidelights crowned with Gothic tracery.”5 Additionally “all windows are decorated with Gothic tracery and capped with heavily molded labels.”6 Other Gothic style rooms included the entrance hall, the dining room, and even the greenhouse which was eventually replaced by a veranda. In 1897 the veranda was replaced by a room more similar to the original greenhouse.

“In 1902, a large wing was built onto the north side of the castle adjoining the former billiard room and picture gallery. Here too, the extension followed the Gothic style.”7 Following the extension, attic rooms were subdivided and a chapel was installed in a former bedroom. In 1974 fire regulations were required throughout the building which meant additional changes were made to the structure to bring it up to code.

“Leland retired in 1872 when his lease on the Metropolitan Hotel expired and was given to ‘Boss’ William A. Tweed. He died later that same year. Mrs. Leland continued to live in the castle until March of 1880 after which its new owner, the Manhattan Life Insurance Company leased it to the Queens County Hunt Club.”8 Following the Hunt Club, the location served as home to a number of private schools. But in 1897 there was a destructive fire that inevitably led to the selling of the structure to the “Ursuline Sisters, who used it as a seminary.”9 This eventually grew into the College of New Rochelle, which later had to close its doors and was sold to Freemasons.

“Today, the castle of Simeon Leland survives in a suburban area less suitable for a country home, but it remains a landmark of an earlier landscape and a symbol of the fashion, taste and life style that Americans idealized in the third quarter of the nineteenth century.”10 Today the buildings future is uncertain and many local residents are lobbying for its preservation. Leland Castle was added to the National Register in 1976.