This location was the site of the Indianapolis Traction & Terminal station, where the Street Car Strike of 1913 started. The station is integral in the history of labor organizing in Indiana during the early half of the 20th Century, where workers were a lot more organized in fighting for their demands.

The Terminal and streets around it in 1908 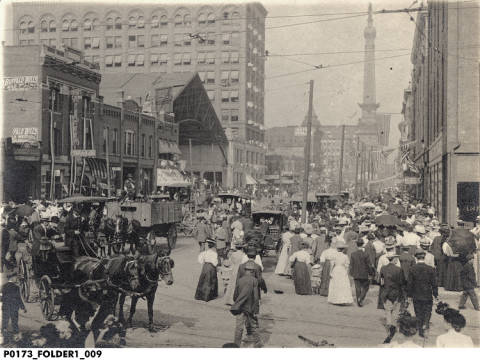 In late October of 1913 in Indianapolis, IN the union Amalgamated Street Railway Employees of America organized a strike against the Indianapolis Traction and Terminal Company. The strikers who were signing up for the union used their large numbers to force the people that were still operating the streetcars to get off them and to join the union. The strikers believed that those who were still working should be sent down to the union hall to sign up and become a member. With the transit system not moving the Terminal Company, still not believing in the union’s right to organize the workers, the company sent out people to run the streetcars on November 2nd. This action resulted in riots and violence with people being shot and killed. At this point, the actions of the strikers had become so violent that the police could not suppress it. A lawyer prominent in the labor movement by the name of Milton L. Clawson was the one who was able to convince them to dissolve. This violence led to the call of the troops by the governor to keep the peace but left once there was an arbitration agreement between the workers and the company. The result of this labor struggle was the first minimum wage law for the state, along with the worker’s right to unionize as long as they did not recruit people to join at work. This event helps to understand why Indiana was such a strong union state at the beginning of the 1900s like Indiana historian James Madison claimed. They were able to do this because of strong leadership and unions, which might not be possible now.