The Imperial Apartments, once considered one of the most imposing apartments buildings in Brooklyn, was built in 1892. It was one of three impressive apartment buildings built by developer Louis Seitz and designed by Montrose Morris. The buildings were part of a wave of new construction in Brooklyn following the opening of the Brooklyn Bridge. The Imperial sat empty for a number of years but was renovated in 2006. It is now a New York City Landmark and is listed on the National Register of Historic Places. 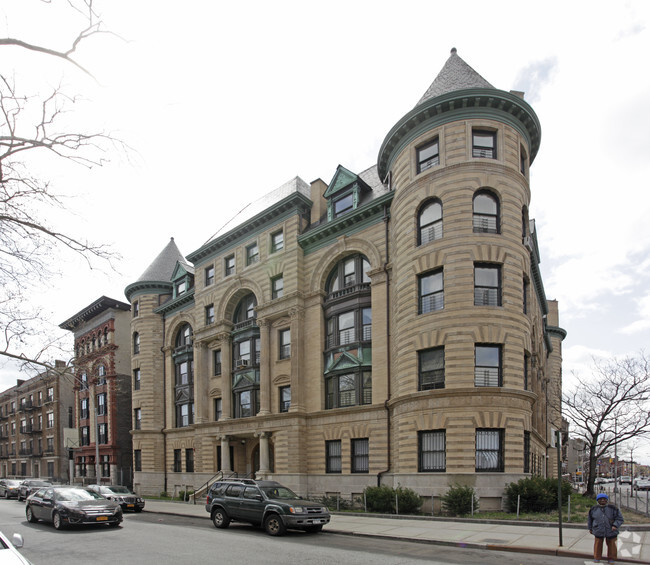 In the late 1800s, Brooklyn was emerging as and up and coming part of the city, largely due to the construction of the Brooklyn Bridge. There was a flurry of new construction in Brooklyn, and while much of it was industrial, there was also new residential construction as well. Louis Seitz, who was then only in his 20s, partnered with Montrose Morris, also in his 20s, to build some of the area's most imposing buildings. Seitz was rapidly becoming a successful developer and Morris was in the process of becoming an acclaimed architect.

In the 1890s, Seitz and Morris partnered on three apartments in Brooklyn. The largest and most well-known of these is the Alhambra. The Imperial was the second of the three. Seitz instructed Morris to design a building with no thought as to its cost, a building which would be "handsome beyond compare." The building is on the east side of Grant Square and at the time of its construction, the area was beginning to attract a number of well-heeled residents.

The building that Morris designed resembles a French chateau. It was built with elements of the Renaissance Revival style, including grand arches, Corinthian columns, and a slate mansard roof. The building's most distinguishing features are inarguably its three corner towers. The building's detailing gives it a similar appearance to the Dakota on Manhattan's West Side, and newspaper accounts from the time often compare the two.

In the late twentieth century, the building sat empty and boarded-up for a number of years. Like many buildings in the area, it went into a long period of decline. In 2006, the building was renovated and is once again used for residences. Much of the building's interior has changed over the years, but the turret apartments remain largely as they were at the time of the building's construction.

The building is a New York City Landmark and is listed on the National Register of Historic Places.

This walking tour of Crown Heights history starts at a former armory and leads to apartment buildings, a 19th-early 20th c. brewery, two museums (Brooklyn Children's & Jewish Children's), and a synagogue. You'll end at street trees plus plaques along Eastern Ave. honoring the end of World War I.