John Philip Sousa Junior High School opened in 1950 and was at the center of the civil rights struggle to end segregation in Washington D.C.'s schools. At the time of its completion, black children were denied admission to the all-white Sousa School . African Americans challenged their exclusion in the court case Bolling v. Sharpe which was one of the five cases tried together before the U.S. Supreme Court in 1954. The denial of admission of black children by the Washington DC school board was declared illegal along with each other case of school segregation in the five cases tried together under Brown v. Board of Education. 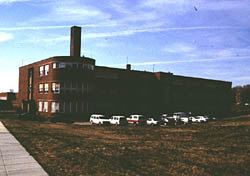 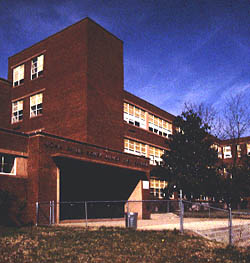 While the condition of many of the schools for black children was much better in Washington, D.C. than other southern cities, many of these schools were still underfunded compared to the rest of the school system throughout the District of Columbia. In addition, African American students and parents believed that the doctrine of separate but equal established in the 1896 Plessy v. Ferguson case violated the 14th Amendment.

In 1949 a group of African American parents from the Anacostia neighborhood sought to admit their children to John Philip Sousa Junior High School prior to its opening in September 1950. The school board denied their petition for the admission of their children even though they had empty classroom space available. Afterward, the school opened as an all-white school. On behalf of the reject children, James Nabrit and the NAACP sued for admission to John Philip Sousa Junior High School.

The case was named after 12-year-old Spottswood Bolling as his name appeared at the top of the list of rejected students. This particular case was unique because the equal protection clause of the 14th Amendment applied only to state laws while the District of Columbia was under the jurisdiction of Congress. Another aspect of this case that makes it unique from other segregation cases of this time period is that although the segregated schools the plaintiffs were forced to attend were inferior to the new all-white Sousa school, no evidence of inequality was given to the court. The plaintiffs argued only that the principle of "separate but equal" was unconstitutional.