State Farm Stadium, formerly known as University of Phoenix Stadium, is a multi-purpose stadium in the western United States, located in Glendale, Arizona, west of Phoenix. It is the home of the Arizona Cardinals of the National Football League and the annual Fiesta Bowl. It replaced Tempe's Sun Devil Stadium as the Valley of the Sun's main stadium. The stadium is adjacent to the Gila River Arena, home of the Arizona Coyotes NHL team. The University of Phoenix acquired naming rights over the stadium in 2006. The stadium had originally been named after its NFL as Cardinals Stadium. The rights where given back in 2018 and the Cardinals signed a contract to name this stadium State Farm Stadium in 2018. The agreement to change the name was a 18-year commitment that helped state farm gain advertisement. This stadium has hosted many different sporting events that were very popular. The stadium has hosted the Fiesta Bowl, 2007 and 2011 BCS National Championship Games, 2016 College Football Playoff National Championship, Super Bowl XLII in 2008, the Pro Bowl and Super Bowl XLIX in 2015, and will host Super Bowl LVII in 2023. For soccer, it was one of the stadiums for the 2015 CONCACAF Gold Cup and the Copa América Centenario in 2016. For basketball, it hosted the NCAA Final Four in 2017, which is scheduled to return in 2024. All of these high level events have brought in huge revenue for the city of Phoenix. The biggest event this stadium has hosted is Super Bowl XLIX. This super bowl was between The New England Patriots and The Seattle Seahawks. This was a match up of two great coaches in Seahawks coach Pete Carroll and Patriots coach Bill Belichick. The quarterback matchup was also just as good between Tom Brady and Russell Wilson.

The Outside Of University of Phoenix Stadium Brady leading the offense down the field 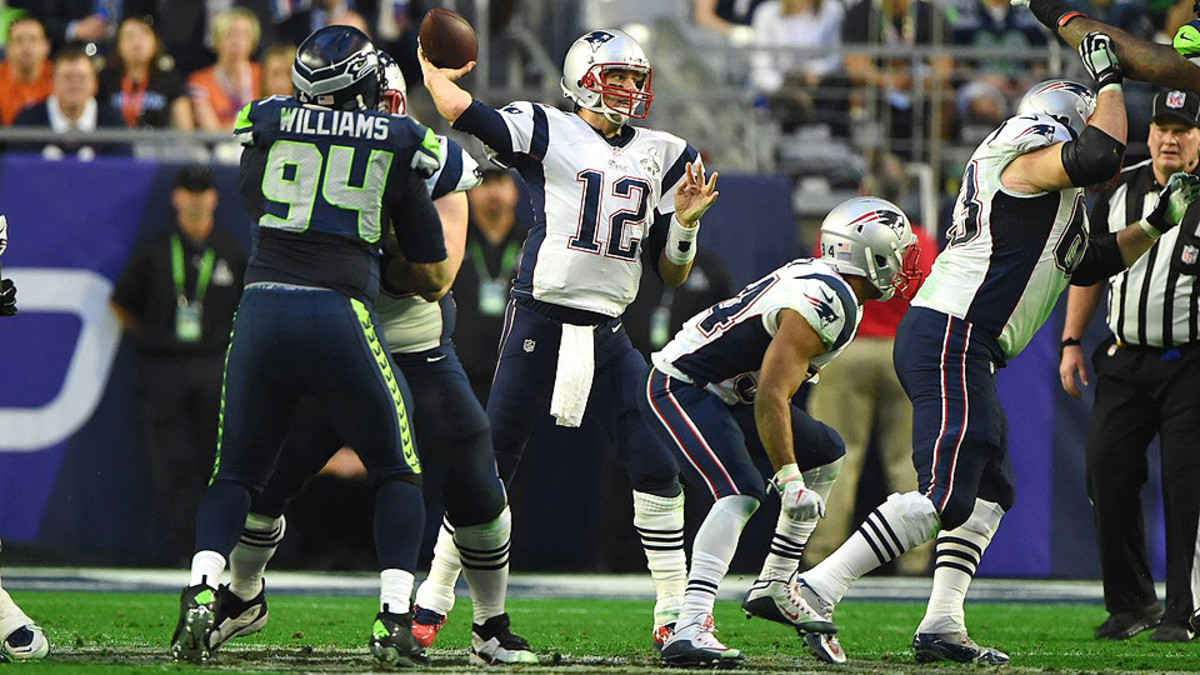 Richard Sherman and Tom Brady after the game 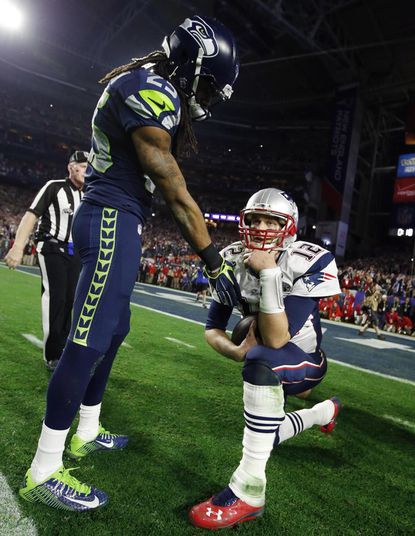 The XLIX super bowl was held at University of Phoenix Stadium. The contest was between the Seattle Seahawks and the New England Patriots. The game was played on February 1, 2015. The Seattle Seahawks were the defending champions after winning the super bowl the previous year. It was a game of great coaching and quarterback matchups. The coaches were Seattles Pete Carroll and New England's Bill Belichick. The quarterbacks were Russell Wilson and Tom Brady. Brady had three super bowl rings and Russell had 1.

The game had many unexpected performances from very unexpected people. One of those people was Seattles wide receiver Chris Matthews. His super bowl performance was one of the best from a wide receiver ever. Just a year before he wasn't on a NFL and was working at footlocker. Then he put up 176 receiving yards, 16 catches, and 1 touchdown. If the Seahawks had one the game he most likely would have been named super bowl MVP.

The game started out very slow as both teams were feeling each other out. The first quarter ended and it was scoreless. In the second quarter is where it opened up. Seattles wide receiver Chris Matthews started to make plays and New England responded by scoring points of their own. At halftime both teams put up two touchdowns and the score was tied 14-14. Once the third quarter started Seattle started to pull away scoring 10 unanswered points to make the score 24-14. Once again Tom Brady would have to come up clutch in the fourth quarter to win the game.

In the fourth quarter Tom Brady came up clutch yet again and lead a game winning drive to take the lead 28-24. The game winning drive was capped off with a touchdown to Julian Edelman. There was still time left on the clock. The Seattle Seahawks drove down the field needing a touchdown to win the game. They drove all the way down to the 1 yard line. Instead of giving the ball to Marshawn Lynch they threw the ball and it was intercepted by the Patriots Malcolm Butler in the final seconds to win the game. It was one of the most incredible endings to a super bowl ever.

This super bowl was one of the craziest ever. It ended on the last play and won Tom Brady his 4th super bowl ring. The Patriot Dynasty continued as the organization won their 4th championship. Tom Brady tied his childhood hero Joe Montana with 4 super bowl rings. Tom Brady's stats for the gam were 37-50, 328 yards and 4 touchdowns. This game clutched a super bowl record of most touchdowns scored by a player in super bowl games by Tom Brady combining all his touchdowns from previous super bowls.

This game was significant in Tom Brady's career because he tied his childhood hero Joe Montana in super bowl wins. Tom looked up to Joe his whole life and was aspiring to be better than him. This win also solidified the Patriots dynasty the patriots had one 4 super bowls within a 13 year span. Tom Brady started to enter the greatest of all time conversation after this win. Whats even more impressive was that he threw for 4 touchdowns against the NFL's best defense which included the legion of boom. One of the NFL's most feared secondaries of all time.