The remains of the Verdura Plantation House of Benjamin Chaires 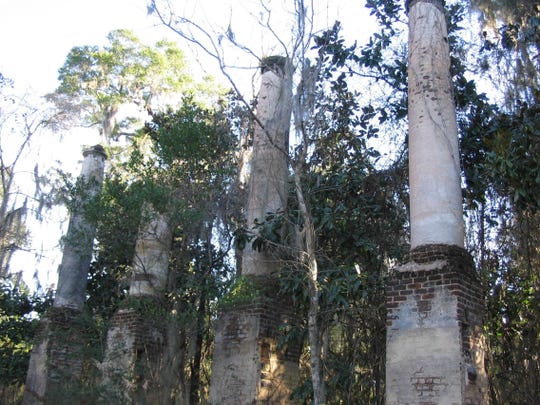 The Chaires brothers arrived in Tallahassee not too long after it was founded. Benjamin was mostly a planter, however he involved himself in other business dealings. He helped establish a bank in Tallahassee and joined other prominent, wealthy Tallahassee men in establishing a railroad. At one time, he also served as a Justice of the Peace. Above all, though, Benjamin was considered the wealthiest of the early planters in the region. Slaves built a large, three-story home called Verdura on nine thousand acres east of Tallahassee for Chaires. The home was destroyed by fire in 1885, however five columns of the home are still standing today.

Green Hill Chaires settled near Lake Lafayette east of Tallahassee. Native Americans attacked his property in 1838 burning his home to the ground. His wife and child died in the fire. He chose not to rebuild in the same location. Instead, Green H. Chaires moved further east and built a new plantation called Evergreen Hills. Chaires also sat on the board of Central Bank, which his brother Benjamin had been a part of founding. Benjamin sat as president of the bank.

Benjamin passed away in 1838 leaving his wealth and property to his wife. Thomas Peter, owner of Woodlawn Plantation, passed away in 1842. According to 1850 tax rolls, the Chaires family, including heirs, owned close to 12,000 acres of land and held almost 400 slaves. Green Hill passed away in 1860.