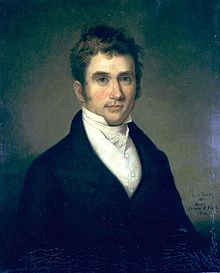 John Branch established Live Oak Plantation upon his arrival in Tallahassee in the 1830s. Prior to his arrival from North Carolina, he had a lengthy career in politics serving as Governor of North Carolina, United States Senator, United States Secretary of the Navy under Andrew Jackson, and even a Representative in the United States House. Branch was seemingly out of politics when he moved to Tallahassee. He likely moved to the area following his daughter Martha, the wife of Dr. Edward Bradford.

President John Tyler appointed Branch as the sixth and final Territorial Governor of Florida to assist in the transition into statehood. Branch maintained his residence at Live Oak during his time as Territorial Governor and invited the public out to the plantation for a celebration of Florida’s formal entry into the Union in March 1845. A banner proclaiming “State of Florida” is said to have humg over the entrance to the property.

In the 1850s, Branch purchased a portion of George Whitfield’s plantation which was to the south of Live Oak. He named this property Waverly Plantation. Prior to leaving Tallahassee to return to North Carolina, John Branch owned over two thousand acres of land and held over one hundred slaves. He became one of the most prolific cotton planters in the region. When he Branch left Tallahassee in the 1850s after the death of his wife, he maintained ownership over Live Oak and Waverly leaving them in the care of an agent to operate them on his behalf. In the Leon County Tax Book for 1860, his property is listed under “Agent John Branch” and as owning over 1,500 acres of land and holding 68 slaves. Branch passed away in Enfield, NC in early January 1863 and was buried there.