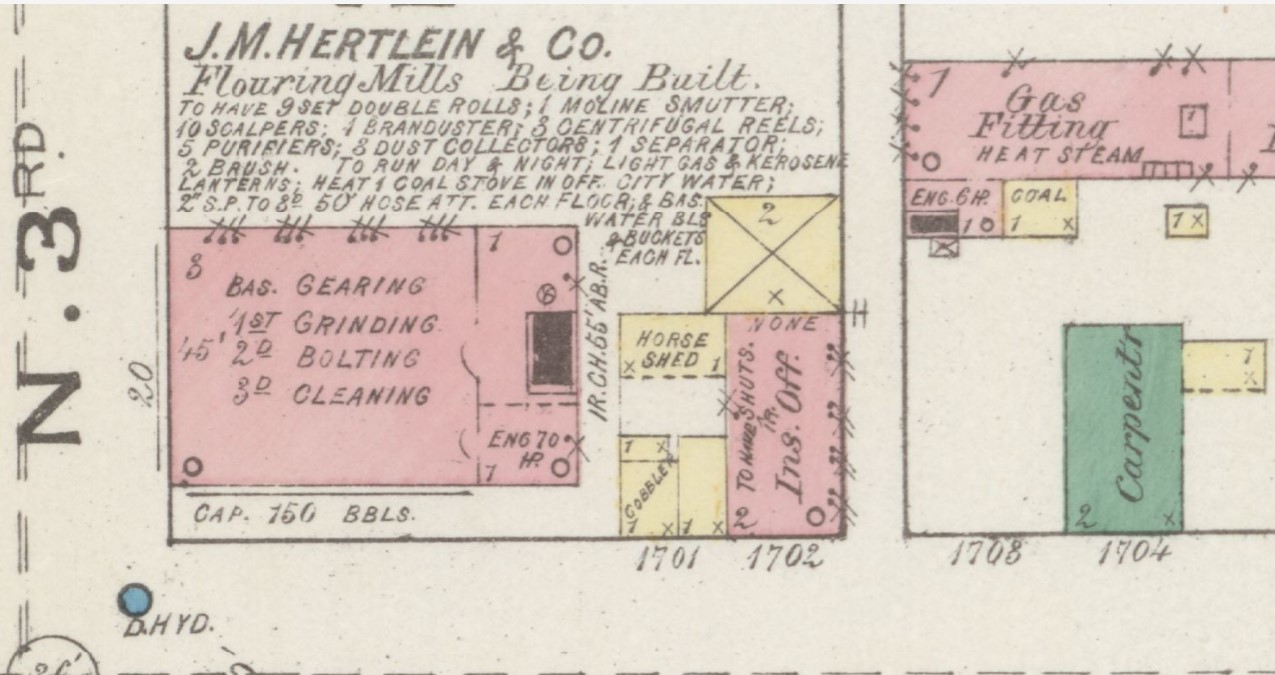 Thomas I. Underwood was born in New York State in 1829 and moved with his parents to Indiana in his teens. He married Ann Eliza Wilson in Batavia, New York in 1850; Miss Wilson was the sister of Thomas's employer, an Indiana hardware store owner. The newlyweds moved to Lafayette, Indiana where Thomas continued to work in the hardware industry. He enlisted in the Army during the Civil War and served as Quartermaster of the Twenty-second Regiment, Indiana Infantry from 1862 to 1865. Thomas returned to Lafayette at the war's end and went to work in the real estate and insurance agency of Peckham & Smith.

After the Civil War, Lafayette was buoyed by the presence of a new railroad depot and a population of around 9,000. Thomas thrived in his work and opened his own insurance agency. Four years after the war's end, the new, two-story red brick building was ready for his business offices. Underwood had the names of the multiple insurance companies he represented painted on the outside, including Hartford, Commercial Union, and Franklin Philadelphia. In the early years, the Underwoods also dealt in real estate. Thomas self-funded an independent fire department; the company used his horse-drawn fire wagon as its logo. Even after moving to Chicago, he remained involved in the business back in Lafayette, now run by his son, Charles, and still known as T. Underwood & Son. Thomas passed away in 1888 in Chicago after a brief illness, only one week after a visit back to Lafayette for the funeral of his brother, Mason Underwood. Thomas returned to Lafayette one last time, for burial.

A local map shows the insurance office in 1885 at what was then 1702 Ferry Street (see the image below). The two-story brick building was sandwiched between the alley to the east with a carpenter shop further east, and two one-story wood frame buildings to the west, one of which contained a cobbler. To the west of the frame buildings, a new flouring mill was being constructed of brick on Third Street near the corner. By 1899, the building was connected to a new brick building to the west (see the image below of the Sanborn Map).

Since the third generation of Underwoods in the business, Richard C., had no sons who lived to adulthood, the next generations in the family business were his sister's descendants and thus, not named Underwood. A third partner joined the firm in 1928, Charles Nitcher from Chicago. The fourth generation of the Underwood family joined the business in 1946. Charles Nitcher passed away in 1953. A New York native, Laverne Kast, became the new partner with Walter and John Graham.

Richard C. Underwood was retired by the 1950s and lived until age 84, dying in Lafayette in 1961. After Walter Graham retired in 1956, the third generation of Underwoods was gone from the office; Walter sold his share to his son. John, and Mr. Kast. A new partner joined in 1964, Kenneth D. Witman, a former Notre Dame student. A great-great grandson of the founder, Craig W. Graham, was part of the business by the late 1970s. Chuck Clark merged his business, Preferred Insurance Group, with the Underwood company in 2017.

While the early years of the business focused more on fire insurance, the current business has expanded to a number of insurance products, with the main office in Lafayette on State Route 38, and three other Indiana offices in Remington, DeMotte, and Columbus. The award-winning Underwood agency represents over 15 carriers. The vacant, 4,000+-square-foot building on Ferry Street was offered for sale in 2012.