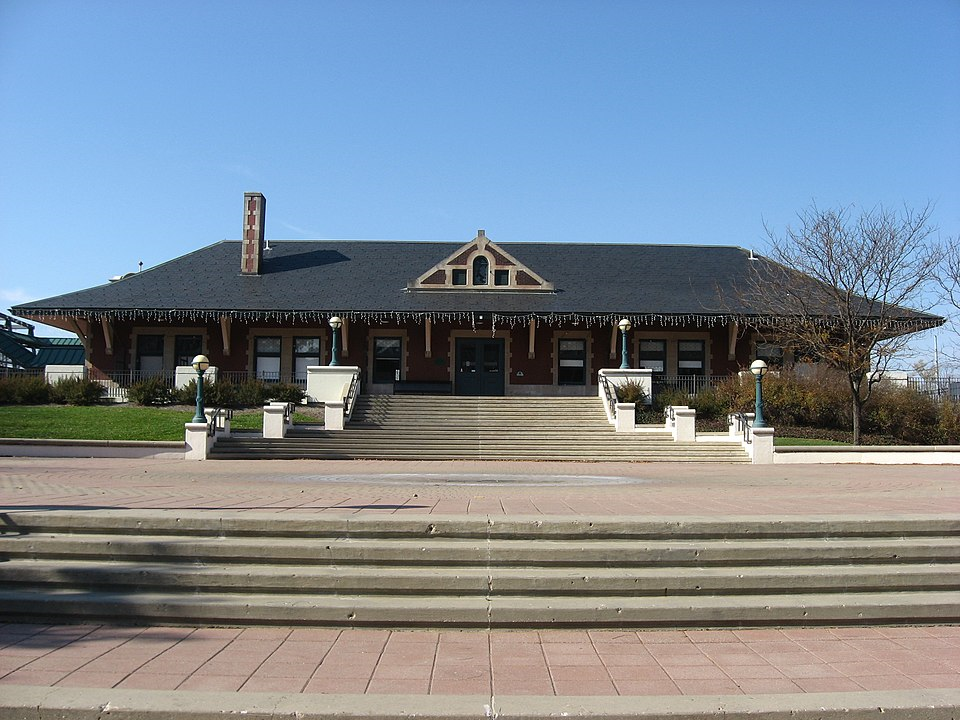 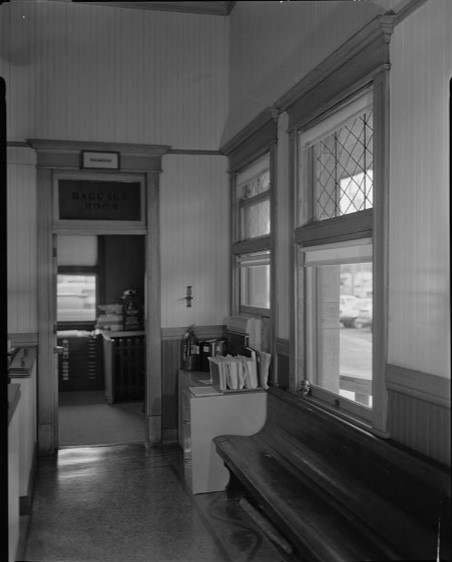 The Big Four Depot was built in 1902 and is about 113 feet long by 33 feet wide. The one-story structure has a hipped roof of slate shingles and supported by brackets on stone supports. The main façade in the relocated structure faces east, with a central entrance of oak paneled and glass double doors. The lower portion of the building's facades are faced in rough limestone up to a smooth limestone belt below the windows; the upper portion is pressed brick. Two gable-roofed dormer windows with Palladian windows and limestone surrounds, plus a chimney with limestone quoins pierce the roof. The west side of the structure now faces the new railroad tracks. The south end of the building features another central doorway with new ramps leading to the pair of doors. The newly-added basement level is visible on the west and north sides of the building, with precast concrete support columns and recessed glass. The entrance to the Amtrak and bus station is on the lower level of the depot's west side, on a new platform.

The interior of the depot still contains the large waiting room with its original wooden benches and a terrazzo floor with an elaborate floral border. The room borders the original stationmaster/ telegraph office. An office in one corner of the waiting room was added in the early 1900s. A vestibule was added in the 1980s. Restrooms have been moved and updated; the baggage claim area now contains a concrete stairway to the lower level.

The depot was owned by New York Central Railroad until 1968, when the company merged with the Pennsylvania Central Railroad. In 1970, the company declared bankruptcy. The Norfolk and Western used the depot for passenger service until 1979. The building was then converted into offices for the Railroad Relocation Project and restored, before being given to the city of Lafayette in 1983. Before being moved, the structure was documented by the Historic American Buildings Survey.

The plaza surrounding the railroad depot - the James F. Riehle Plaza - was built in the mid-1990s to accommodate the relocated depot building and the new basement. Only the raised terrace that contains the depot is considered part of the 2003 National Register listing for the depot, and not the rest of the plaza. The building is significant in the history of transportation and for its architecture as an example of an early twentieth century depot. The building was a standard design from New York Central for Midwestern stations, with a combination of elements from Richardsonian Romanesque, Neoclassical, and Arts and Crafts styles. You can party at the depot, too - the structure is available to rent for events.