New Era Stadium, or formally called Rich and Ralph Wilson Stadium, is the home of the Buffalo Bills. In the 1969 NFL Draft, the Bills selected O.J. Simpson out of the University of Southern California to be their star running back of the future. O.J. Simpson ran wild over the NFL in this stadium when it was called Rich Stadium.

O.J. Simpson carrying the ball in his home stadium of Rich Stadium. Rich Stadium was overflowing of people wearing Simpson's jerseys and "Juice" signs. People across the country came to watch Simpson tear it up on the turf at Rich Stadium. 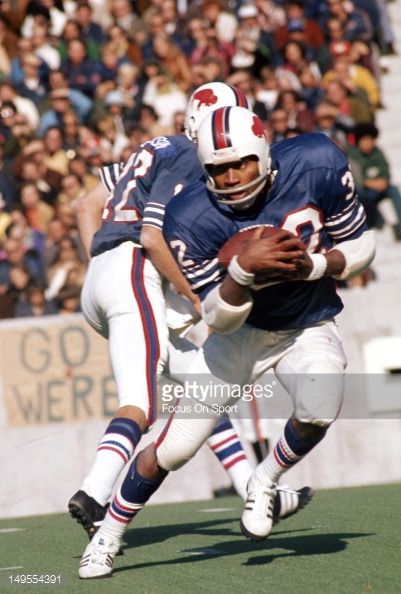 This picture was captured right when Rich Stadium installed their artificial turf in the new stadium. After 14 months of construction, the new Rich Stadium was finished. The stadium officially opened up on August 17th, 1973 as the Bills hosted the Washington Redskins. 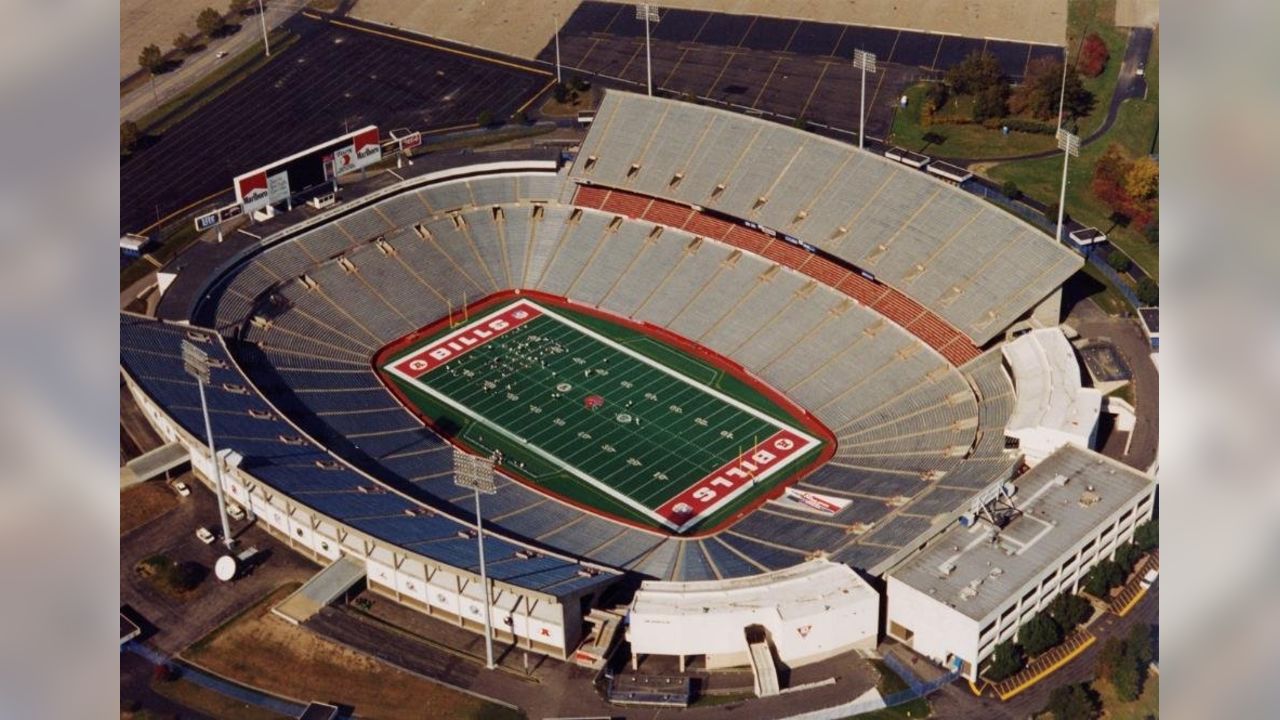 This picture was captured during the middle stages of development of the stadium. The main focus for the design aspects of the stadium was to make sure they could pack as many fans without being a hazard. The stadium could hold up to 80,000 fans on 3 different levels. 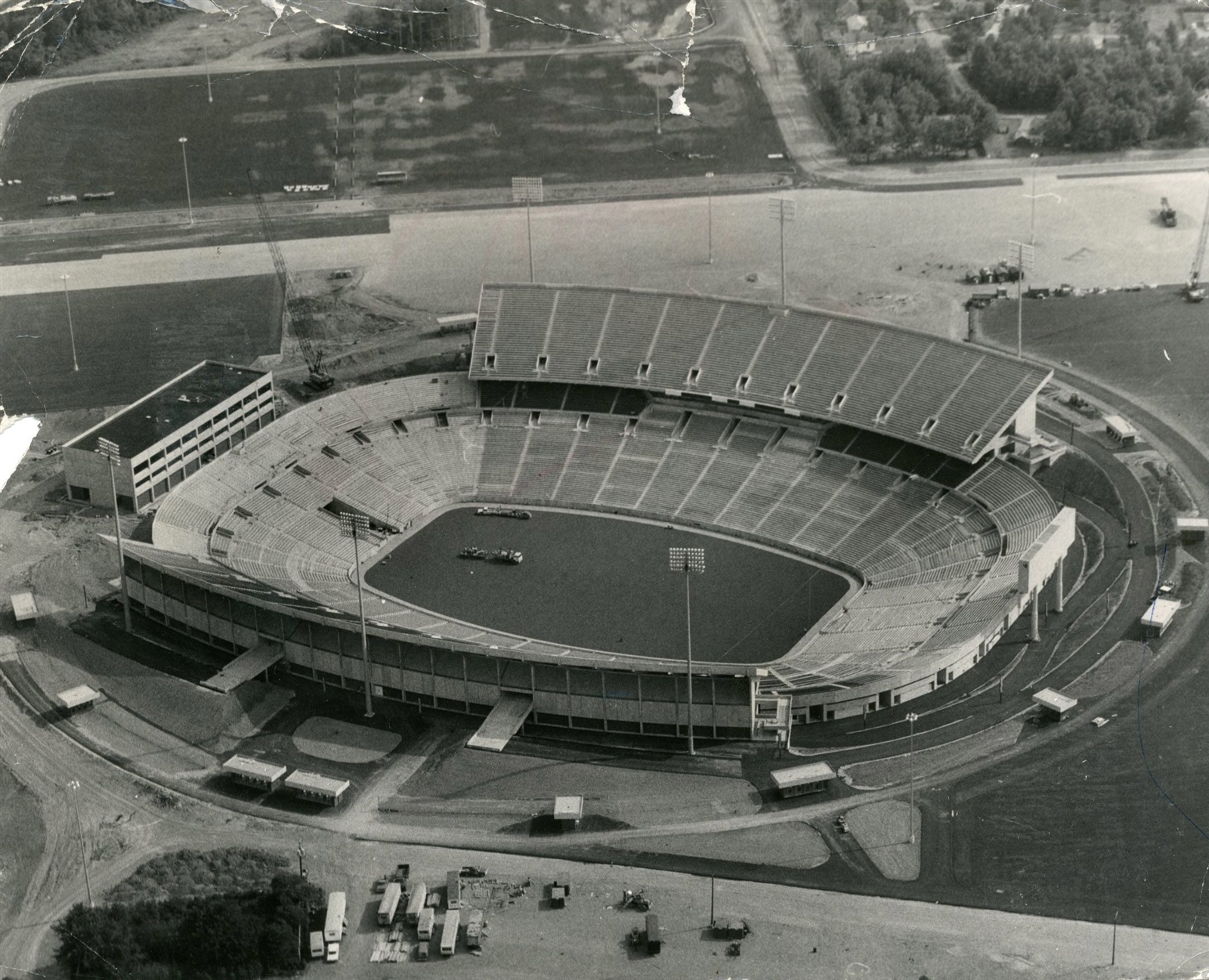 In August of 2016, the Buffalo Bills signed over the naming rights to Ralph Wilson Stadium to the New Era Cap Company. The seven year contract changed the name to New Era Field. 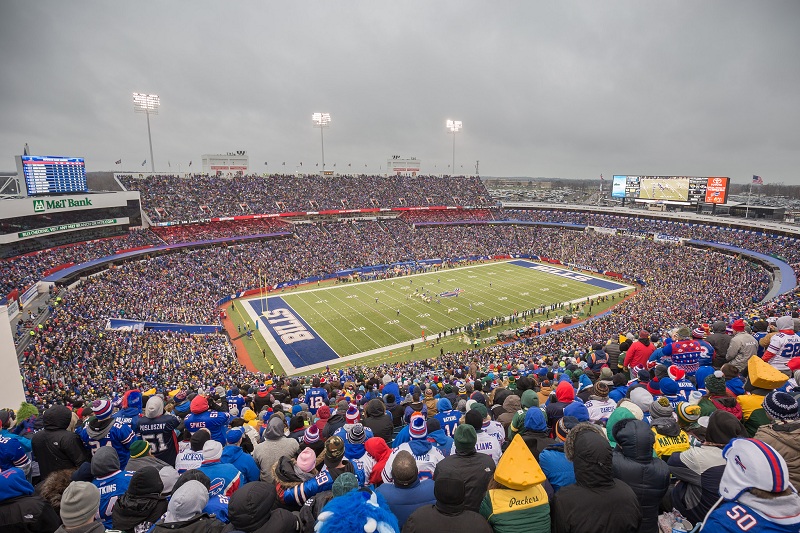 When O.J. Simpson was drafted by the Buffalo Bills in the 1969 NFL draft, Rich Stadium became the running grounds of one of the most dynamic backs in NFL history in the prime of his career. Built in 1973 after the organizations first stadium, War Memorial Stadium, was not big enough to hold the growing fan base of the Bills, Rich Stadium got its name from Rich Foods buying out the naming rights in 1973 and remained the name of the stadium until 1998 when the name switched to Ralph Wilson Stadium. The stadium originally had a seating capacity of 80,000 fans, consisting of three decks of red and blue seats to match the teams colors. The playing field went from being grass to artificial turf which was a huge boost for players.

For O.J. Simpson, this field became his playground. In 5 seasons playing in the new Rich Stadium, Simpson ran for 7,005 yards and 39 touchdowns. But off all those yards and touchdowns, one game in Simpson's career that's stand above the rest was in the 1973 season versus the Baltimore Colts. The Colts were one of the best teams during this time and the Bills were just starting to find their stride. It was a back and forth game until "Juice" Simpson took over. Big run after big run, O.J. Simpson ran over the Colts in what ended up being a final score of 31 to 13. Simpson ended the game with 166 yards on 22 carries with 2 touchdowns which extended the Bills winning streak to 3 games that would propel them to a 9 and 5 season. Rich Stadium, which is now called New Era Stadium, was a huge part of Simpson's career and helped propel him to his NFL record season shattering 2,003 yards in a single season.

Organization, & ImageObject. (2018, June 6). A look through history of the home of the Buffalo Bills. Retrieved from https://www.buffalobills.com/news/a-look-through-history-of-the-home-of-the-buffalo-bills-17516361

Vogan, D. (2016, August 19). From Rich Stadium to the Ralph: A look back. Retrieved from https://www.wkbw.com/news/a-look-back-at-home-turf-from-rich-stadium-to-the-ralph