This visitor's center includes exhibits that interpret the history of France’s first independent settlement along the lower Mississippi Valley, the Confederacy's Fort Hindman, and other sites throughout Arkansas Post National Memorial Park. The park includes over seven hundred acres of land and commemorates a vast history of events that shaped the United States. Exhibits, signage, and programs share the history of Native American settlements in the pre-Columbian era, the first European settlement in the lower Mississippi valley region, the final battle of the American Revolution, the acquisition by the United States in the Louisiana purchase in 1803, and the battles fought during the Civil War in 1863. Together, these interpretive experiences show how Arkansas Post has been involved in international struggles for territory and power and how these events shaped this region of the country. The park is located at the site of the April 17, 1783 battle known as Colbert's Raid. The final casualties sustained during the American Revolution occurred here during the raid. Throughout much of the Civil War, the post was firmly under the control of the Confederacy. The park also contains the January 11, 1863, Arkansas Post battlefield where United States troops defeated the defending Confederate army, thereby gaining control of a very strategically crucial river port. 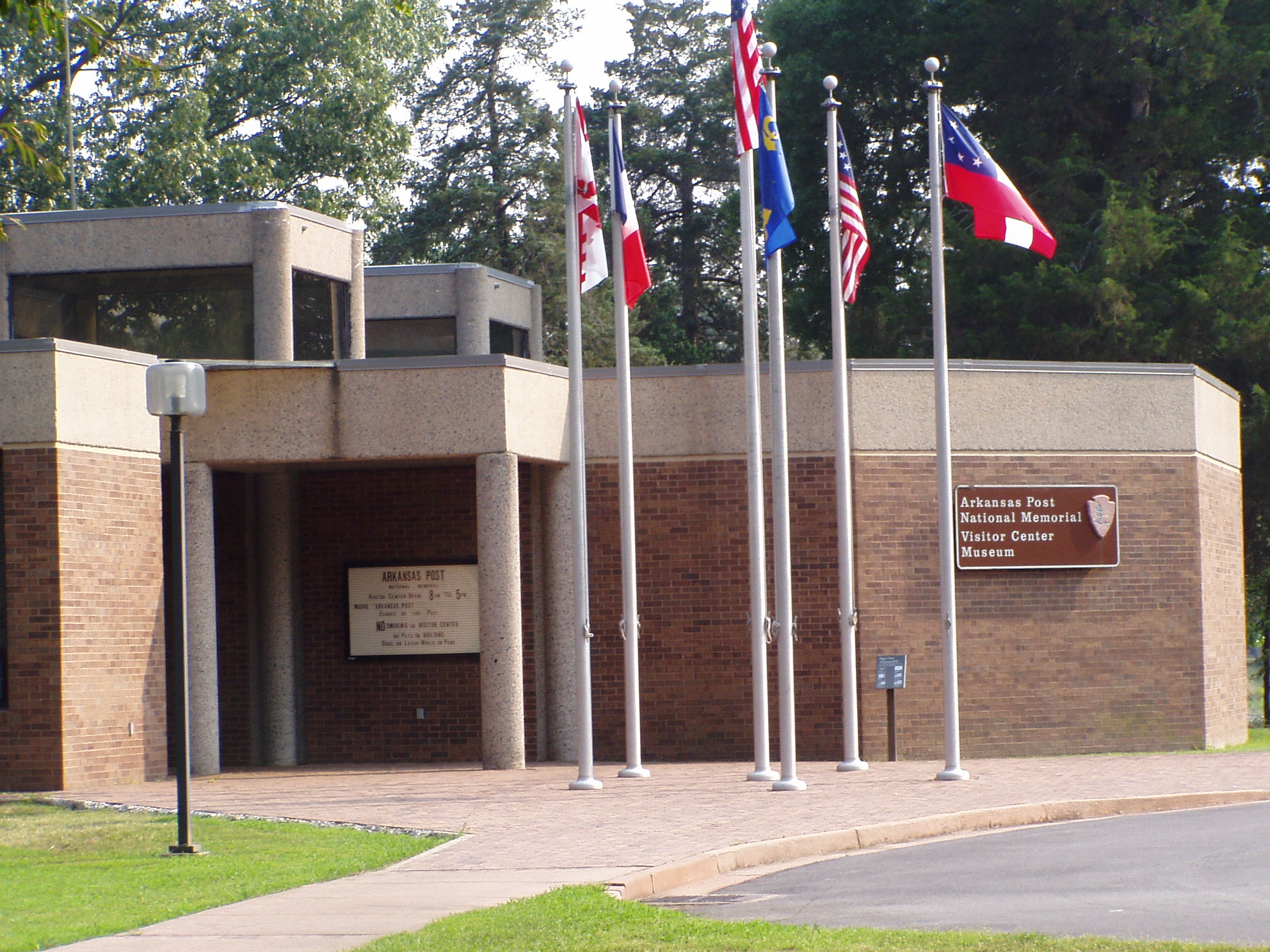 Historical marker explains the Battle of Arkansas Post when more than 30,000 Union men forced the surrender of about 5,000 Confederates at Fort Hindman. 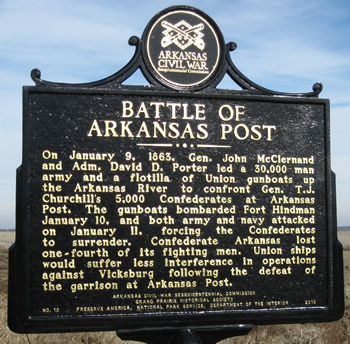 Edge of Empires historical marker at Arkansas Post begins: "The succession of outposts here, remote from centers of New World empire, symbolized a dream of the imperial age: to connect the Gulf of Mexico to North America's vast interior by the great rivers that drained it." 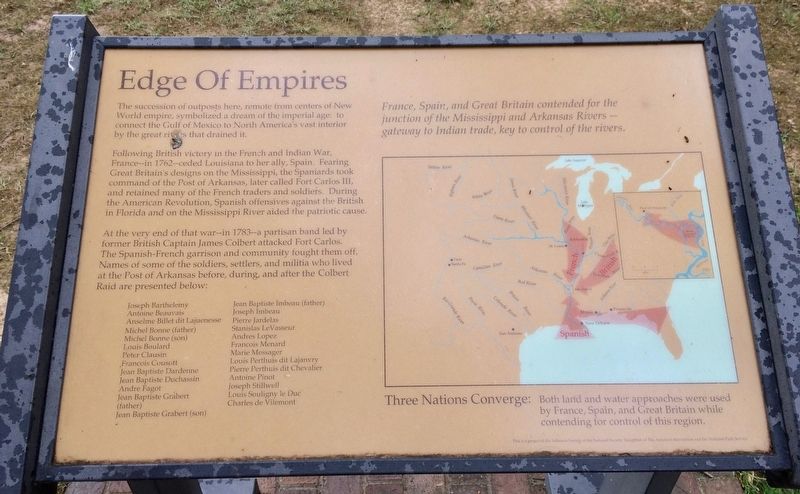 Fort Hindman historical marker at Arkansas Post begins: "Standing here in January 1863, you would have seen Confederate Fort Hindman. In what is now the water, the fort stood atop a 25-foot high bluff The fort's cannon could fire a mile up or down the river to protect the breadbasket of Arkansas. The Confederates could slip down to the Mississippi River to disrupt vital Union supply lines." 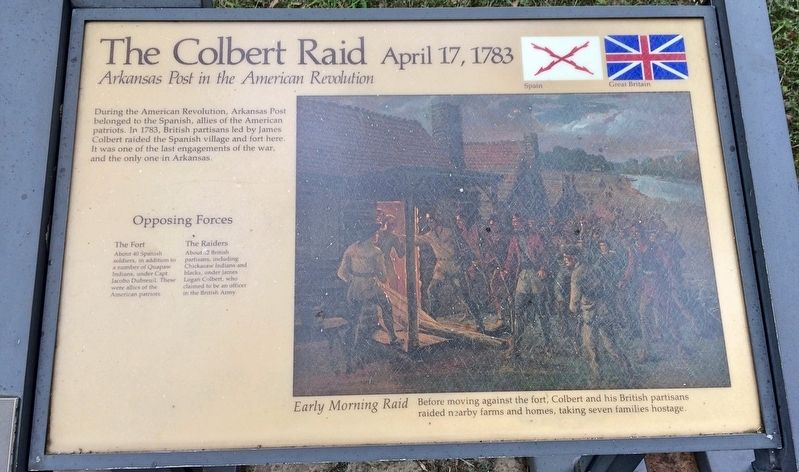 Arkansas Post was established in 1686 as “Poste de Arkansea” by Henri de Tonti at the Quapaw tribe village called Osotouy. The post became France’s first independent settlement along the lower Mississippi Valley. The location of the post moved slightly over the years as American, French, Spanish and Confederate soldiers alike struggled for decades to maintain control of the area. Spain took control of the area from the French in 1762 when King Louis XV gave up the territory anticipating France’s loss of the French and Indian War. Spanish troops took over the post in 1766. As an ally of France, Spain fought also against the British during the American Revolution. When the Spanish learned of the French-American alliance, Spanish soldiers from Arkansas post took over the abandoned British Post of Concordia down the river as well as parts of the eastern bank of the Mississippi River.

For more than a year, Spanish and British soldiers accompanied by their respective Native American allies battled along the lower Mississippi. While most English soldiers were captured, many also joined to fight alongside the Chickasaw tribe. Former British Army Captain James Colbert was the commander of such a force which fought consistently against the Spanish in the area. Unable to completely push Spanish forces off the territory, Colbert made the call to target forces at Arkansas Post as a strategy to halt commerce traveling along the Mississippi. Colbert arrived at the Quapaw Village the morning of April 17, 1783 to inform the tribe of his plans, and they attacked later that day.

This was the beginning of the only battle of the Revolutionary War that occurred in present-day Arkansas, referred to as the Battle of Arkansas Post or Colbert’s Raid. The battle is said to be the final battle of the war, where the last casualties of the war were sustained. Colbert and more than 100 men captured the second-in-command of the Spanish forces and his family members in the small village surrounding the fort. A long-range battle between Spanish troops and Colbert’s men lasted for several hours. After taking shelter in a nearby ravine, Colbert raised a flag of truce and demanded the Spanish to surrender. Refusing, ten Spanish soldiers and several Quapaws attacked Colbert and his men, forcing them to flee in canoes. Several men died on either side and Colbert’s men escaped with prisoners from the area.

In 1803, Arkansas Post became part of the U.S. through the Louisiana Purchase, and within the following two decades was a thriving port city and was chosen as the capital of the Arkansas Territory in 1819. The Louisiana Purchase awarded the U.S. more than 820,000 square miles of land from France. Following the purchase, the land mass of the U.S. was double what it had been prior. Parts of 15 states were established as a result of the purchase. The acquired territory stretched from the Mississippi River to the Rocky Mountains and from the Gulf of Mexico to the Canadian Border. Arkansas Post had come under the control of yet another nation, this time the U.S. American troops occupied Arkansas Post in January 1804.

Throughout much of the Civil War, Arkansas Post was a major Confederate stronghold. In 1862, the Confederates constructed Fort Hindman at the post used for raids on Union shipping along the Mississippi. Fort Hindman, which has since been swallowed by the Arkansas River, was a bastioned earthwork with rifle pits lining the peninsula. Another battle referred to as the Battle of Arkansas Post, or the Battle of Fort Hindman occurred at the post during the Civil War in 1863, less than a year after the construction of Fort Hindman. In January that year, more than 30,000 Union soldiers and a flotilla of warships attacked the fort. Outnumbered, the Confederates were forced two surrender after two days of fighting. More than 130 Union soldiers died and nearly 900 were wounded. Sixty Confederate soldiers died and nearly 5,000 were captured.