On April 9, 1939, African American contralto singer Marian Anderson performed a free concert outside the Lincoln Memorial for an audience of 75,000. The concert was organized after Anderson refused to perform in front of a segregated audience at Constitution Hall, the headquarters of the Daughters of the American Revolution. Anderson's concert at the Lincoln Memorial was a powerful civil rights demonstration. Though Anderson had never performed in front of such an enormous crowd and admitted she was frightened, she later wrote, "I could not run away from this situation. If I had anything to offer, I would have to do so now." 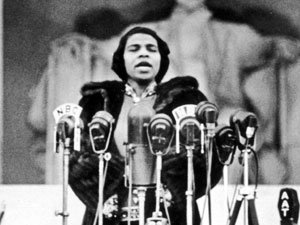 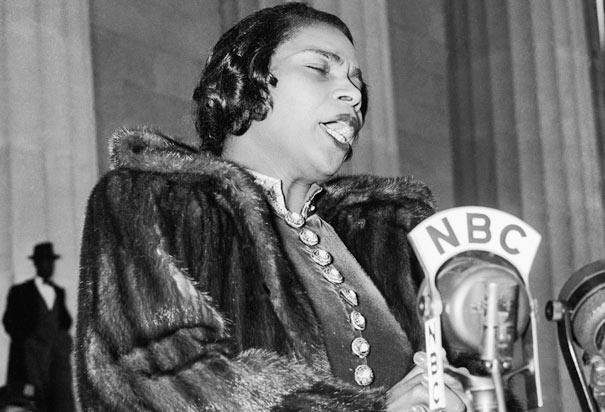 In 1939, world-renowned classical singer Marian Anderson was scheduled to perform a concert at Washington Constitutional Hall. The concert was organized by Howard University, a historically-black college in Washington, D.C., though the concert hall was managed by the Daughters of the American Revolution (DAR), a heritage organization that at the time was exclusive to white women. The DAR refused Howard University's request for Anderson to perform to an integrated audience.

A number of prominent groups and individuals came to Anderson's defense. Organizations including the Brotherhood of Sleeping Car Porters, the American Federation of Labor, and the National Negro Congress, formed the Marian Anderson Citizens Committee (MACC) to pressure the DAR to allow Anderson to perform, though they refused. In February 1939, First Lady Eleanor Roosevelt, enraged over the DAR's discriminatory practices, resigned her membership from the organization in protest. She wrote in her "My Day" columnn: "They have taken an action which has been widely talked of in the press. To remain as a member implies approval of that action, and therefore I am resigning." As the controversy garnered national attention, a free concert was organized at the Lincoln Memorial.
On Easter Sunday 1939, Marian Anderson stepped in front of an audience of 75,000, her largest audience yet. Though the enormity of the crowd frightened her, she knew it was what she had to do for her excited audience and for support of racial integration. She opened with singing "My Country, 'Tis of Thee" and symbolically changed the lyric from "of thee I see" to "of thee we see." The NBC Blue Network announcer described the powerful performance by stating, "Marian Anderson is singing this public concert at the Lincoln Memorial because she was unable to get an auditorium to accommodate the tremendous audience that wishes to hear her."

President Roosevelt and Walter White, executive secretary of the NAACP, persuaded Secretary of the Interior, Harold Ickes, to organize the concert on the steps of the memorial. When Ickes introduced Anderson, he told the desegregated crowd of more than 75,000 people,  "In this great auditorium under the sky, all of us are free. Genius, like justice, is blind. Genius draws no color lines."One major impact Anderson had on her audience was during 'My Country, 'Tis of Thee," when she sang, "of thee we sing" instead of the well-known line, "of thee I sing." Years after the the concert, Anderson explained why she changed the words to the patriotic song when she said, "We cannot live alone. And the thing that made this moment possible for you and for me, has been brought about by many people whom we will never know."

"Marian Anderson performs at the Lincoln Memorial." History Unfolded: US Newspapers and the Holocaust.  https://newspapers.ushmm.org/events/marian-anderson-performs-at-the-lincoln-memorial