The Froebel School in Gary, Indiana was founded in 1912. At one time, it boasted the integration of white, black, and immigrant students. However, following the conclusion of World War II, the racial tensions and fight over segregation steadily increased. The Froebel School gained national attention for staging walkouts against the inclusion of black students in their school, especially since other schools were not forced to undergo the same experience. It is an important site for the tour because it shows that even "progressive" schools experienced setbacks in the journey for complete integration and equality inside the school walls. 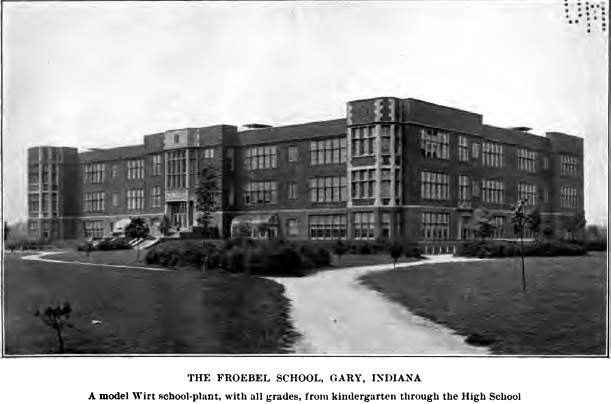 Gary, Indiana's schools had always been segregated by residential boundaries, so in 1927, the school board reinforced de facto segregation by pulling the black students out of Emerson school, a majority white school (Cohen, 1986). From there, the students went to the all black Roosevelt school. The tensions continued for years between groups like the NAACP and the Gary school board. Overcrowding was astronomical in the schools for the black children. Because of the overcrowding, students were forced to attend half days, therefore receiving inadequate education compared to their white counterparts. Although Froebel High School had been "integrated" to an extent since the early 20th century, the students and parents were worried about the rising number of black students in the school and black families in the city. Therefore, on September 8, 1945, white students at Froebel High School staged a walk out to protest the integration of their school (Pfeiffer, 2017). The students claimed they would not return until the black students were removed, the principal was fired, and they were no longer the “guinea pigs” for race relation experiments (Pfeiffer, 2017). However, on August 26, 1946, Gary School Board announced the policy, "that children shall not be discriminated against 'in the school district in which they live, or within the schools which they attend, because of race, color, or religion'" (Cohen, 1986, p. 161). Attempts to ease the As time went on, things only got worse. In 1951, approximately 85 percent of schools were segregated; within ten years, that number increased by 5 percent (Wolff, 1963, p. 253). Despite the Indiana General Assembly passing a law to abolish segregation in public schools in 1949, de facto segregation grew throughout the 1950s, and overcrowded schools continued to grow. The Froebel School eventually closed its doors in 1977.