Perry Meridian High School was the first of many Indianapolis located public schools to experience 'busing'. Busing in the 1970s for Indianapolis meant the racial redistribution of students - taking Black students from majority-Black schools and placing them in predominantly white schools. This practice was communities being broken up, they often offered little to no support during the transitions to the schools, and it placed Black students at risk in order to please the stats of the school when it came to diversity. 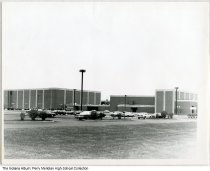 During the 1970s, it had become apparent in Indianapolis that the IPS or Indiana Public Schools systems were one of many corporations not cooperating in bridging the racial divide within their district. Indianapolis was a heavily segregated city, and Indiana schools had some of the most segregated schooling systems at the time - and still to this day, there are concerns about the lack of integration within many living school communities. In 1973, the IPS had taken little to no actual steps towards the desegregation of the city schools, and so the circuit court had to step in to control the situation. Judge Dillin was handed the issue and decided the most appropriate route was to enforce one-way busing to force integration into their schools. However, the judge did very little to protect students, credible to his notorious nature of rushing policies through with his known catchphrase "cut the wind-up, just give me the pitch (Los Angeles Times, 2006).This was met with great backlash withing the 6 schools that had been determined as the destination for these Black students, maybe most notably at Perry Meridian High School where it escalated so intensely that the FBI had come to investigate after rumors of Black students arriving at school with weapons for protection spread. LaTonya Kirkland, a student who had been bused into the school, recalls the greeting her and other Black students were given. While talking to the Indianapolis Star, Kirkland said she“remembers a dozen of her white classmates approaching the bus, their hands slapping against the yellow metal side panels...the bus started to rock as the white students slammed against the bus". Although it has its own individual history with desegregation, Perry Meridian High School represents just one of many school locations that put Black students in danger for the sake of ‘desegregation’.