When many people think of conservation, they think of Rachel Carson's Silent Spring, or our current struggles with deforesting in South America. What may not immediately come to mind is that the ideas of protecting our natural habitats for both people and animals is not a new idea. The Indiana Dunes area is a monument to this fact, first declared a state park in 1926. But it is also a monument to how the ideas of conservation in Indiana have pushed forward through and beyond 21st century with its creation as a national park (Indiana's first) in 2019.

The first director of national parks, Stephen Mather, visits the Indiana Dunes area in 1916 accompanied by Richard Lieber, the father of the Indiana state parks system. 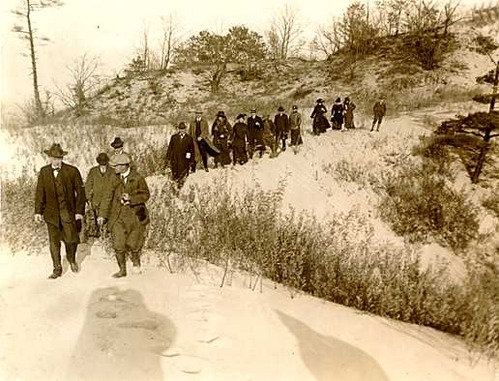 The area currently occupied by both this park and the closely tied Indiana Dunes State Park was once home to seasonal hunting camps of Miami and Potawatomi tribes. Like much of northern Indiana, European and American settlers trickled in late to the area. Economic activity was given a boost when the Michigan Rd. was built in the 1830’s, but the beaches really began to see popularity in the early 1900’s, after unions won more leisure time for workers and both cars and railroads (South Shore) provided easy access to the lake, especially for those coming from Chicago.

Soon after a report was released on the unique fauna in the area, industrialization stepped in. Huge tracts of land were being sold to steel companies, and even more ruined by large-scale sand mining operations. There was the sense that time was running out for Indiana's scarce lakefront property; it was a problem that required direct, immediate action. Nothing was more telling than the dramatic Indianapolis News article from 1919 titled, "Indiana Dunes, among finest in world, menaced by commercialism; seething furnaces, rumbling machinery, threaten nature's work". Concerned citizens began to campaign to have the area protected, even involving Stephen Mather, the first director of the National Park Service. However, it wasn’t until 1926 that the state park was opened.

In 1966, part of the state park and some additional purchased land was designated a national lakeshore. Additional legislation during the latter half of the 20th century added land, and in 2019 it was made a national park- Indiana’s first. Today the park encompasses 15,000 acres. Obviously, although they are the most popular spot at the park, not all of this is dunes. The park also contains marshes, prairies, bogs, and other habitats crucial to sustaining the local flora and fauna. The park’s status upgrade to national park in 2019 is living proof of Indiana’s dedication to conservation into the 21st century.

The Dunes serves as a unique spot in Indiana due to both its early relevancy to conservation efforts and its massive economic potential. The land it contains is worth millions of dollars. While much of the Indiana coast has been taken over by residences and industrial plants, the park is a testimony to Indiana's early willingness to shirk economic interests in favor of conservation. Many people at the time knew little of the park's unique habitats- they simply knew it as the place they went to rest and relax. Speaking to the Hammond Times in 1922, Miss Cecil Seymour said, "For years a few of my girl chums and I have spent a considerable portion of the summer camping at the dunes." Over the years, as more interest was expressed in species conservation, the park's habitat functions became just as important, if not more so, than its recreation ones.