Standing atop a hill, crowned by a circle of trees, the Evangelische Lutherische Emanuels Kirsche compound, is a quiet symbol – evocative of a bygone era in which the lives of its parishioners revolved around the religion it embodied and the calendar it followed. Comprised of a small, Victorian cathedral, a one-room schoolhouse, a parsonage, a garage, and various other functional spaces, the compound serves as a testament to the influence that late 19th Century, German immigrants had on both the city and county of Dubois, as well as the culture of southern Indiana as a whole, although little information is available about the history of the congregation itself. 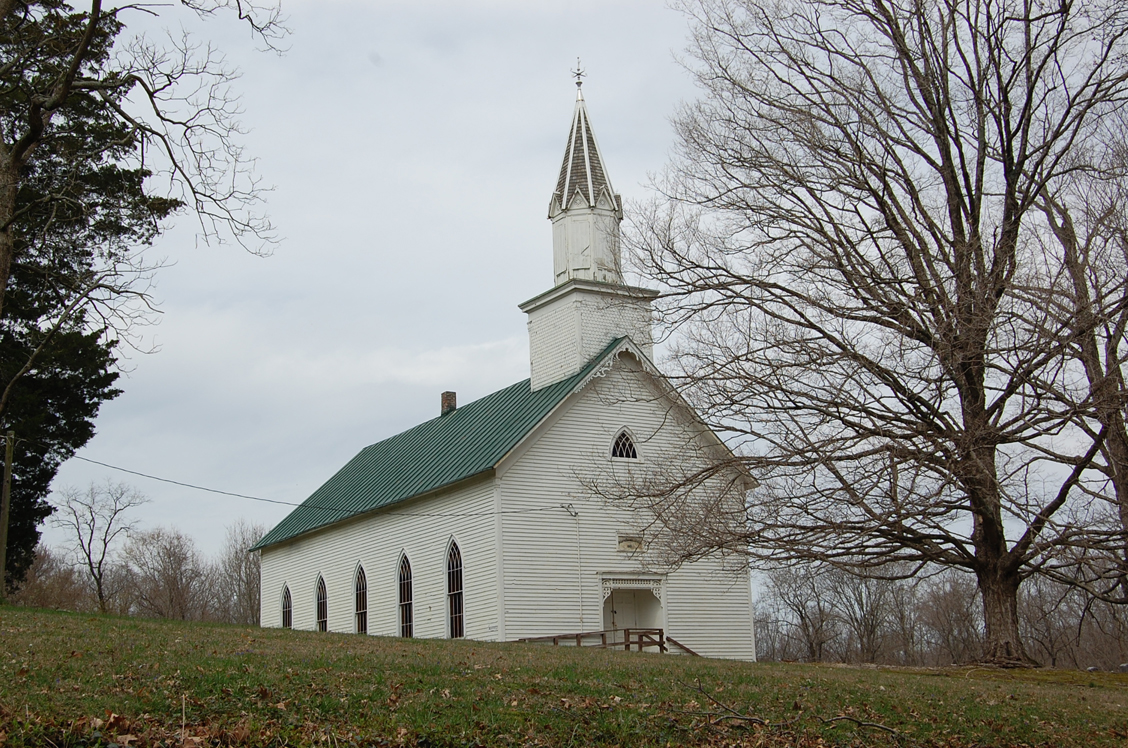 While Dubois County was initially populated by Scotch-Irish immigrants and poor white settlers migrating from the southern states, German immigrants began arriving in the 1830s and quickly settled in the southwestern part of the county while the northern parts were primarily Irish. However, the town of Dubois where this parish is located is in the Northeast corner of the county, thus indicating the presence of a small pocket of German immigrants in what is traditionally a Scotch-Irish territory within the county. According to Elfrieda Lang’s essay, “Some Characteristics of German Immigrants In Dubois County,”, the majority of German immigrants who migrated to the southern part of Indiana, tended to poor farmers who clustered together in search of cheap land which they took pride in cultivating and maintaining under the care of the same family for generations. Known for their hardworking and thorough nature, many of these immigrants traveled from coastal port cities to the interior of the country entirely on foot, and once they arrived, managed to maintain their language, culture, and sense of individualism through the central vehicle of the church. Mostly Methodist, Lutheran, and Catholic, the church was seen as the center of German life in Indiana, often bleeding into the education of immigrant children in fledgling parochial schools – such as the one at the Evangelische Lutherische Emanuels Kirsche – as well as reflecting several sectarian conflicts these immigrants carried with them from their homeland. Most specifically, the divide between North German immigrants and South German immigrants, and the desire for a priest who was from the same region as his congregation. Likewise, these churches, while under the religious care of the priest, were under the financial oversight of groups of their parishioners known as trustees, giving the immigrant communities influence over the types of religious instruction and doctrine they were to practice. This site is incredibly evocative of religion forming the center of the lives of German American Hoosiers as expressed in the previous entry. Not only was the church the center of much community involvement, as evidenced through the debate regarding the territorial alliances of the congregation's priest, but also the educational life for the majority of these families, demonstrated by the establishment of parochial schools. In this way, the Evangelische Lutherische Emauels Kirsche, builds on the kind of clustering suggested by the settlement at New Harmony: centered around religion, but extending into other aspects of life. However, it is because German immigrants to Indiana were so numerous that they were able to extend this influence beyond their community clusters and into the infrastructure of the state itself.