The Empire Hotel at 28 Main Street was built before 1895 as the St. Nicholas Hotel. Michael J. Brennan was the proprietor. In 1898 the name was changed to the Dewey House, owned by William Dewey and by 1899 an ad gave A. M. Dewey as proprietor. In 1908, it was called the Empire Hotel, Daniel A. Walsh, proprietor. There was an ice house and stable/livery behind it. After 1903 it was managed by George Downing and John Crowley. It had 29 rooms, and its dining room could seat 40; it was just south of the old Harrietstown Town Hall and was nearly lost in the 1926 fire that consumed the town hall. It was torn down to make way for the enlarged Town Hall in 1927. 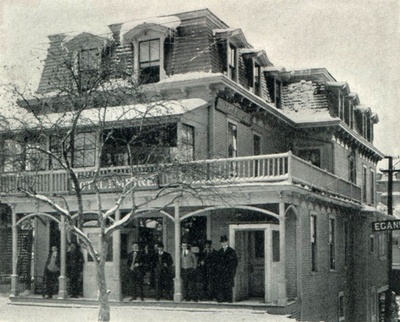