Oberlin Cemetery in Raleigh, North Carolina, shows how African Americans were able to finally have wealth and opportunities after slavery, the Civil War, and Reconstruction. According to oral tradition, Oberlin Cemetery originated as a slave burial ground but then became a marker of African American prosperity rather than hardship. It is a three-acre plot that was constructed in 1873 to accommodate the deceased African Americans who pioneered the community of Oberlin Village. It was in use until 1973 when it reached capacity but it still serves as a reminder of the strong African Americans who lived and died in this area of Raleigh. Unfortunately, no one legally owns this plot of land and those who lay in rest there, but the community still cares for the land and keeps it beautiful. 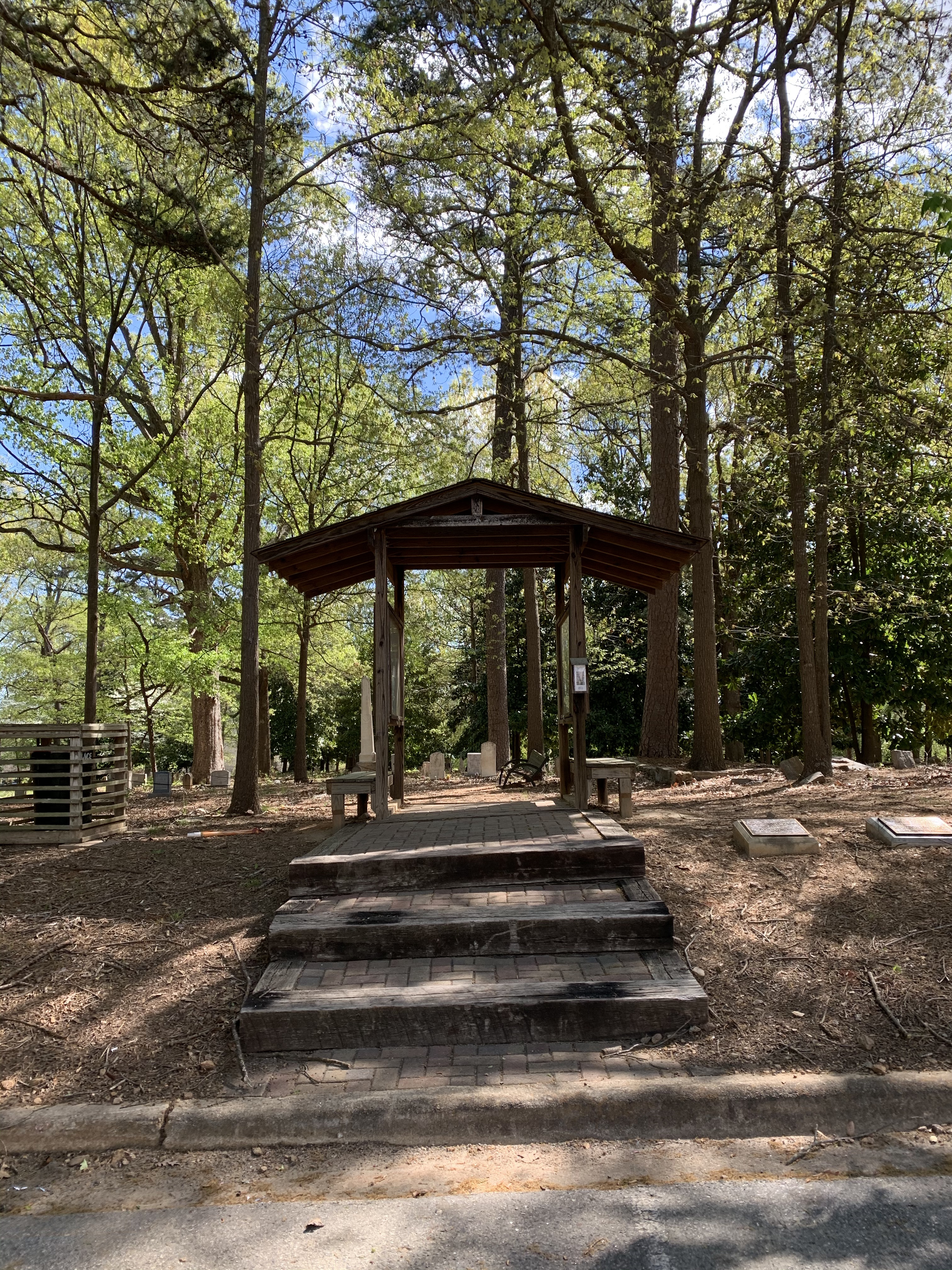 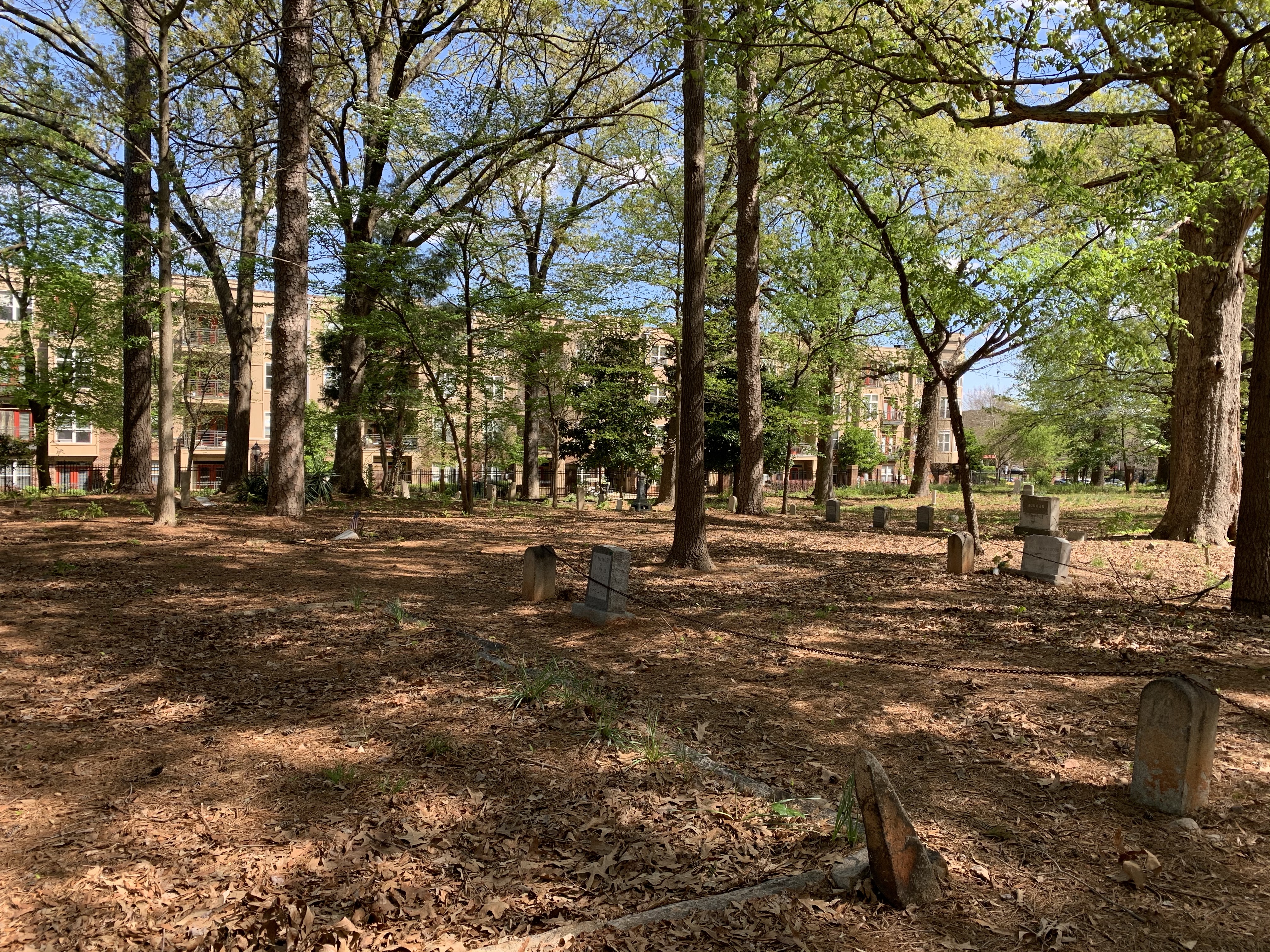 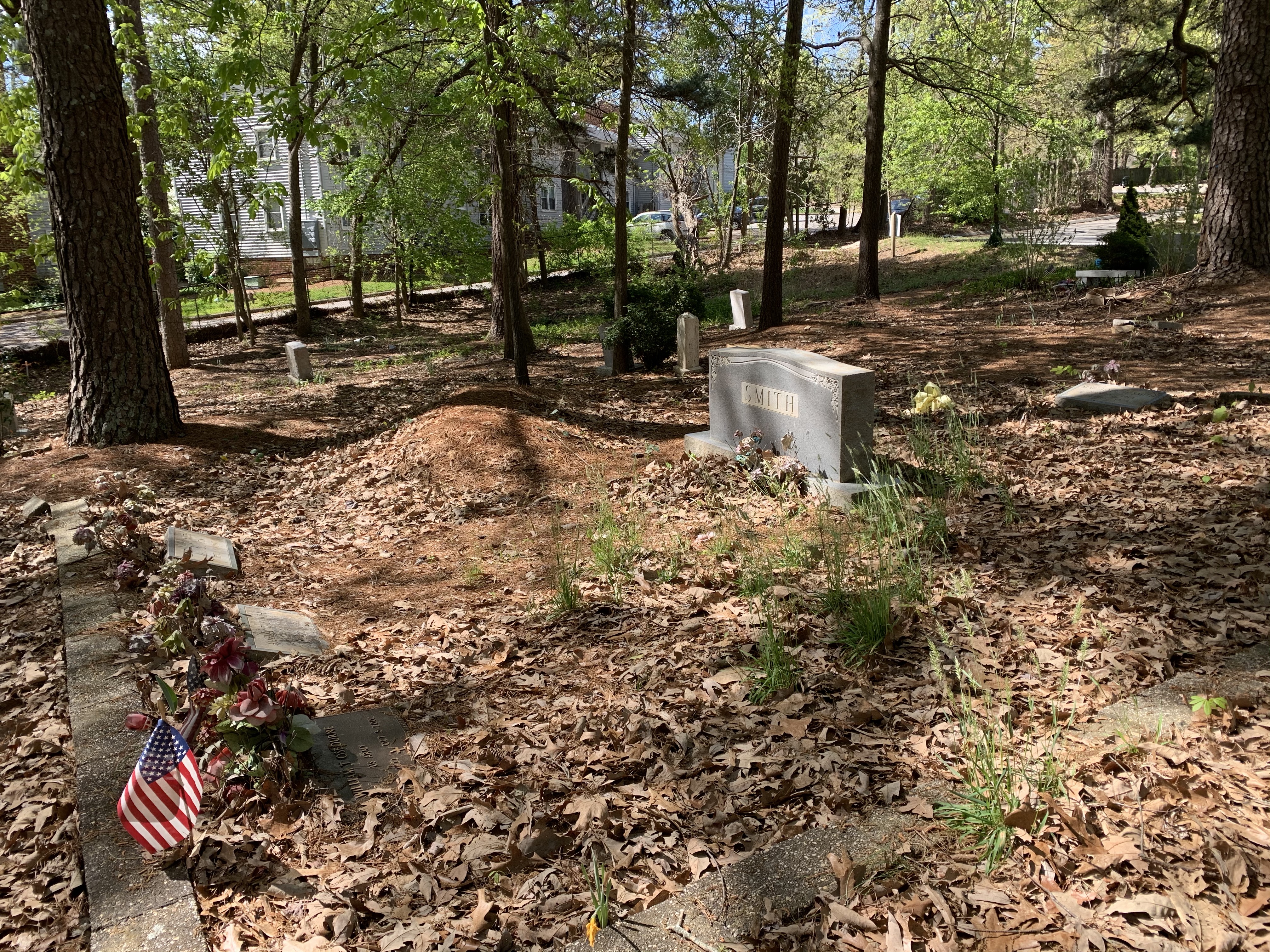 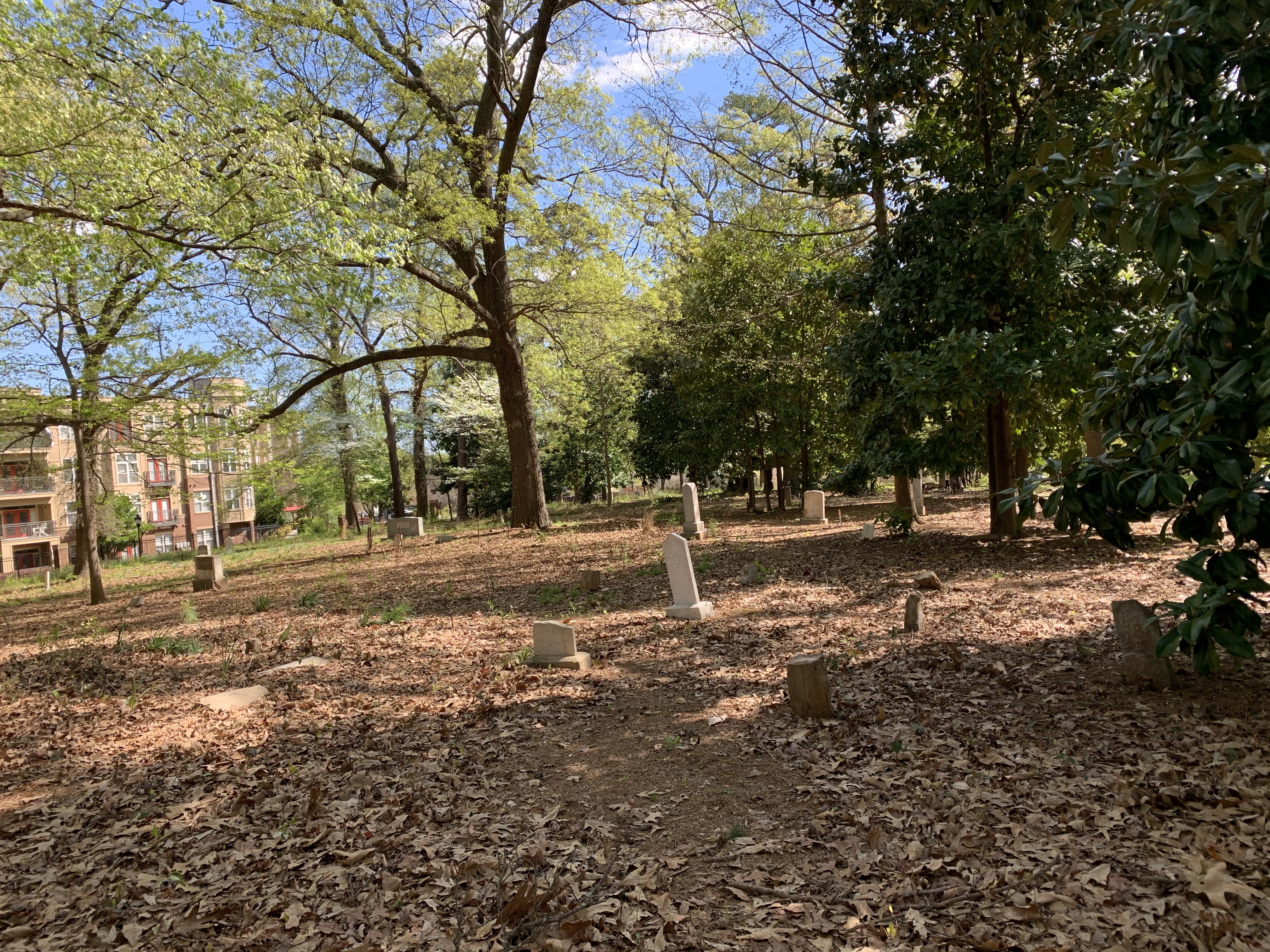 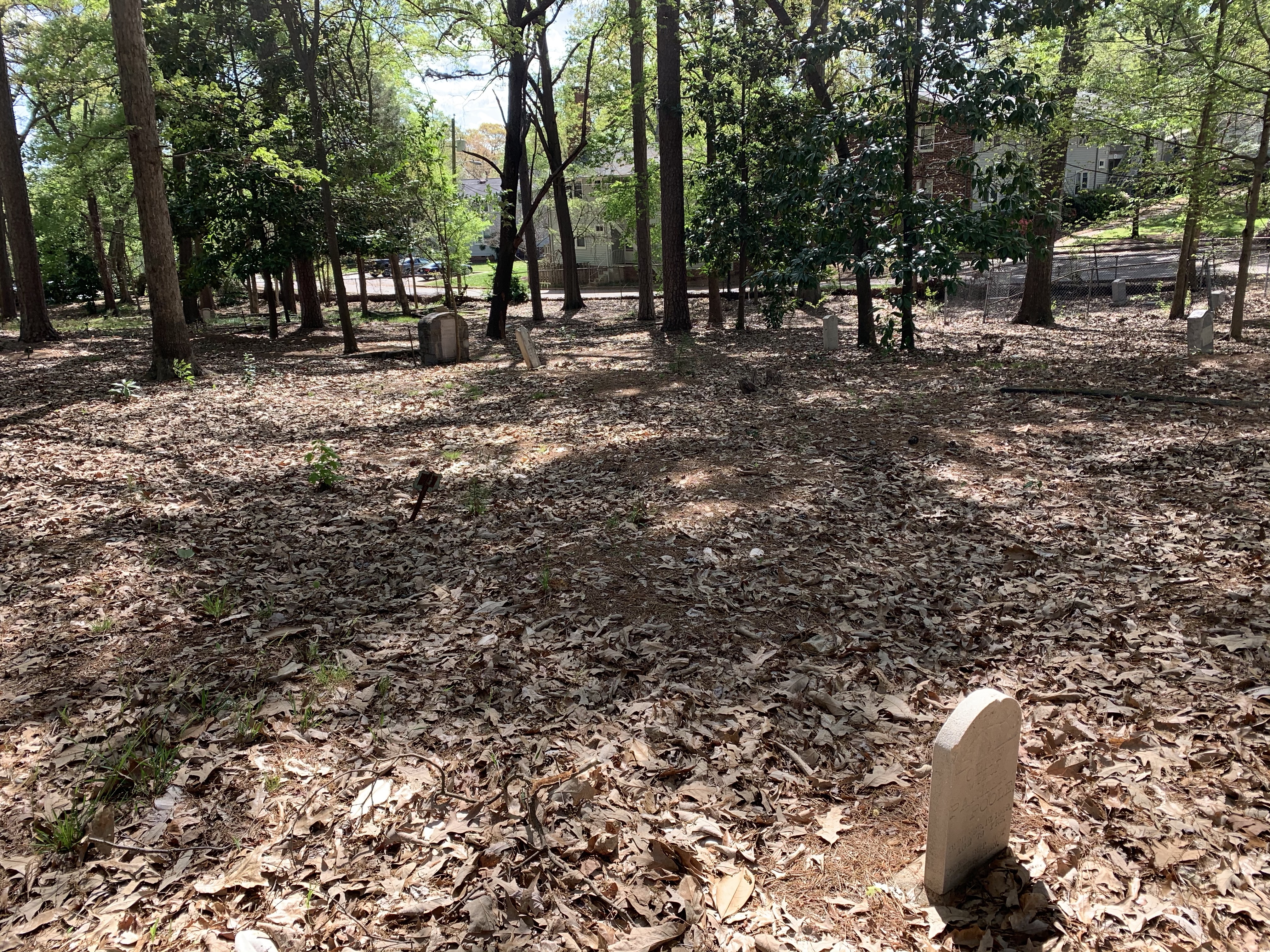 The historical marker for the cemetery. 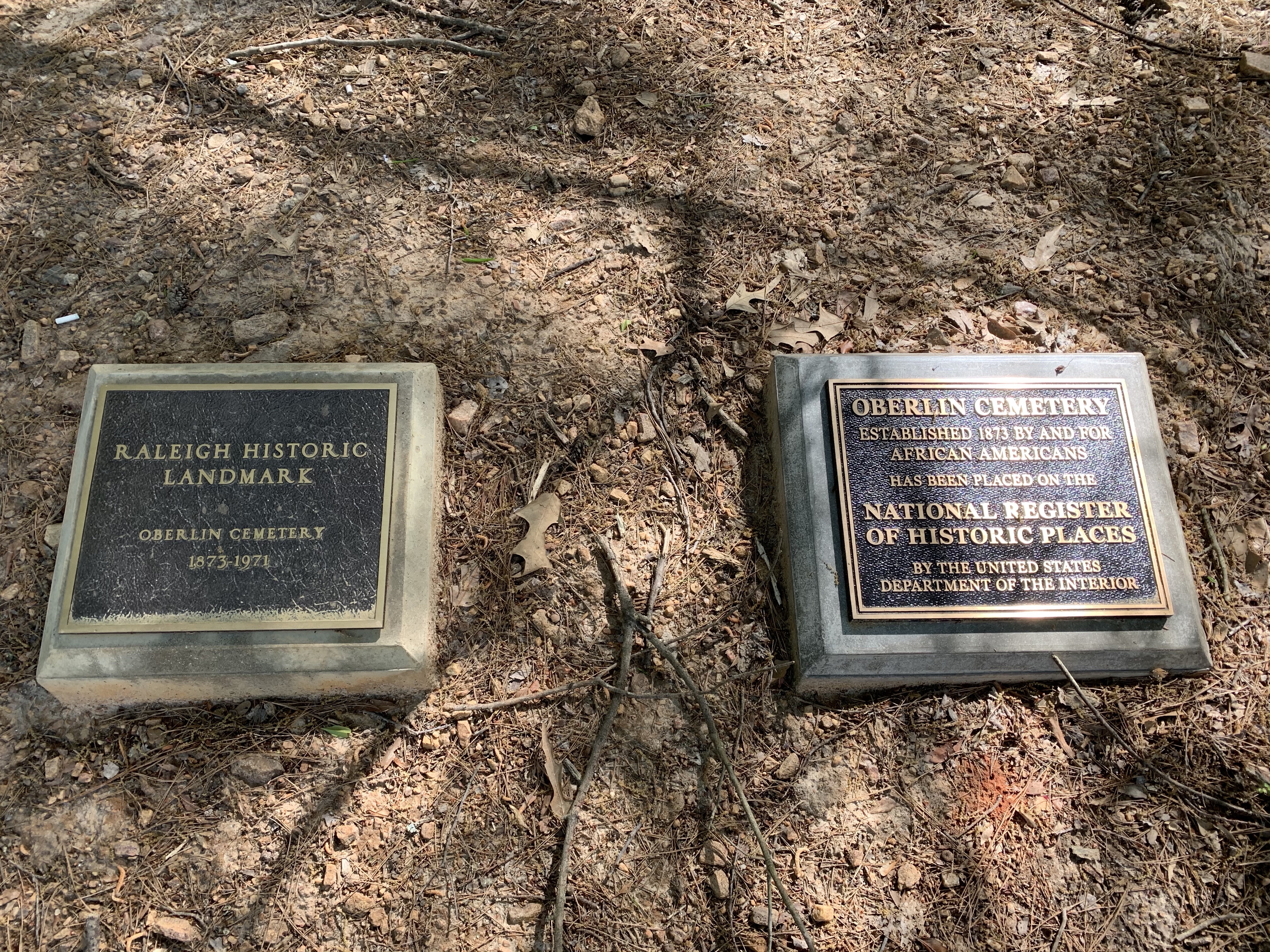 After the American Civil War (1861 to 1865), the United States underwent a period of Reconstruction (1863 to 1877) which aimed to make amends concerning the injustices of slavery and its political, social, and economic consequences for newly freed African Americans. Its purpose was also to readmit the 11 states that seceded and create a more equal society. Although Reconstruction did not fix inequality and racism in the United States and many African Americans still faced inequality well into the twentieth century as they dealt with Jim Crow laws and other discriminatory practices, some were able to rise into wealth and power. Oberlin Cemetery in Raleigh, North Carolina, is evidence of this.

Only one of four known African American cemeteries in the state, Oberlin Cemetery is important to North Carolina’s history because it helps anthropologists, historians, and other preservationists understand Oberlin Village, Wake County's largest freedman's village during Reconstruction. The cemetery grew alongside Oberlin Village because the town became a flourishing, independent African American community following the Civil War. Nearly 671 monuments are dispersed throughout the site as well as 625 individual burials. This is quite impressive considering the space covers only 3 acres (note: only 145 burial sites are positively known, but there are likely 625 burials here). Many “homeowners, educators, businesspeople, military service members, stone and brick masons, carpenters, tailors, doctors, and attorneys” lived in Oberlin Village; African Americans were able to make a name for themselves even after all the adversities they had faced from discriminatory policies. Although this site shows its importance because it shows how African Americans were capable of rising to prosperity following emancipation and Reconstruction, the grounds are in danger of being destroyed.

Since no one legally owns Oberlin Cemetery, it is cared for by a nonprofit called FOV (Friends of Oberlin Village). Antebellum slaves and post-Reconstruction African Americans are laid to rest here, so many current citizens of Raleigh have come together to preserve this land and its legacy. In fact, there was a recent Oberlin clean-up day on April 4, 2020, which shows the way Raleigh citizens still recognize the importance of the site. Unfortunately, this site does face the danger of being destroyed. There is a need for thermal scans to determine which areas need preservation and many people are working hard to get the site registered in the National Register of Historic Places. Gentrification and “urban redevelopment” threaten the cemetery and the historic site, but it is so important to keep the grounds protected because they show so much local history surrounding the South’s Reconstruction and the rise of African Americans to more and more equality throughout the twentieth century.

This site is incredibly important when discussing economic history, especially when thinking about the economic conditions of many African Americans. Oberlin Cemetery and the adjacent Oberlin Village are heritage sites for a diaspora of African Americans who made their living in North Carolina. Wealth can be seen in this site in the number of African Americans who were able to live, work, and die in Raleigh rather than be confined to poor-paying jobs, living in bad neighborhoods. While many African Americans did face inequality rather than wealth post-Reconstruction, it is nice to see the way some were able to succeed, survive, and thrive. African Americans in the Oberlin community were not just survivors of the plague of slavery and racism, they were leaders and achievers. They made a name for themselves and left a legacy for their children. Wealth can also be seen in this site through the houses that still stand on Oberlin Road. The history of the surrounding city includes churches, shops, and houses. The houses show off the success of Oberlin’s black business district. It is so important to talk about Oberlin when discussing the success stories of black settlement and homeownership in the South during the twentieth century.

Talking about Oberlin Cemetery is crucial when making connections to teaching American history. It allows for a connection to local history when talking about the effects of Reconstruction. It can be used to talk about Reconstruction in American History I and then the aftermath of Reconstruction and other racist practices in American History II. Economic and political interests were major concerns when Reconstruction was started and continued to be important after it had ended. Educators can talk about Oberlin as a way to discuss the rise of new African American businesses, homeownership, and economic opportunities. Oberlin can be used to show an anomaly in African American history. It allows educators the opportunity to bring up the hardships many African Americans in the South faced; it is important not to blame African Americans for their struggles and not use Oberlin as “proof” that Reconstruction worked everywhere. The site opens up the door to discuss continuing racial inequality in other locations around the country.