Castillo San Felipe del Morro, also known as "El Morro," was constructed and expanded by Spanish engineers, soldiers, laborers, and enslaved workers in phases from 1539 to 1790. This fort was named in honor of King Phillip II and served as a military base to protect the entrance of the island from Spain's rivals. Over its centuries of expansion and reconstruction, the thick walls repelled thousands of cannonballs and its defenders held off attacks by Sir Francis Drake and other famous explorers and military leaders. During an attack in 1598, the English captured the fort for a short time by landing soldiers on land rather than attacking it from the sea. During the Spanish American War in 1898, the United States became the only country to take the fort owing to the advances in modern naval ships that made forts like this obsolete. However, the fort was the site of an active military installation in World War II as American troops used this location to listen for German submarines and also manned a coastal battery to protect from any possible attack. The fort has been operated by the National Park Service since 1961. In 1983, the fort was declared a UNESCO World Heritage Site.

The fort is one of less than a dozen man-made UNESCO World Heritage Sites in the US. 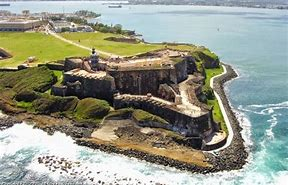 El Morro is one of less than a dozen man-made UNESCO World Heritage Sites in the United States. The construction of the fort began in 1539 and continued in phases for the next 250 years with multiple stages of construction and reconstruction. Spanish conquistadors in Puerto Rico such as Diego Ramos Orozoco saw the need for a fort to protect Spanish ships from rivals and pirates, leading to the modest stone walls that were built in the early and mid 16th century to be replaced by a massive complex by the start of the 17th century. Construction began in earnest in 1589 with over 150 slaves and dozens of skilled workers following plans created by Juan de Tejeda and Juan Antonelli in 1587. The fort included two hall bastions called "tejedas" in honor of their designer.

Construction was slow and the fort was not yet complete in 1595 when it was attacked by an English flotilla under Sir Francis Drake. The fort was attacked a few years later by England's general George Clifford who found success by avoiding a frontal attack and sending troops by land to attack from the rear. The next attack on the fort was by the Dutch and lasted three weeks before the attackers withdrew. The British once again attacked in 1797 as part of the larger series of battles known as the Anglo-Spanish War. General Harvey and Abercromby sent nearly 7,000 English troops to the island but failed to conquer it.

Open daily from 9-6 except for Thanksgiving Day, Christmas Day, and New Year's Day