The New Brunswick Station opened in 1903, but the city's history as a transportation hub dates back to the eighteenth century, first as a river navigation port and then as a railroad center. The New Brunswick Station arose after decades of railroad travel dominating the American way of life, both in terms of moving passengers and goods. As the automobile eroded railway dominance, many rail stations suffered. While New Brunswick Station endured tough times in the mid-twentieth century, the station again found life as a commuter hub connecting people, and Rutgers University students and faculty to such cities as New York and Philadelphia, to name a few. And soon, the station will function as a stop along a high-speed railway demonstrating that the town continues to exist as a transportation hub in the twenty-first century.

New Brunswick Station, opened in 1903 and still in operation. 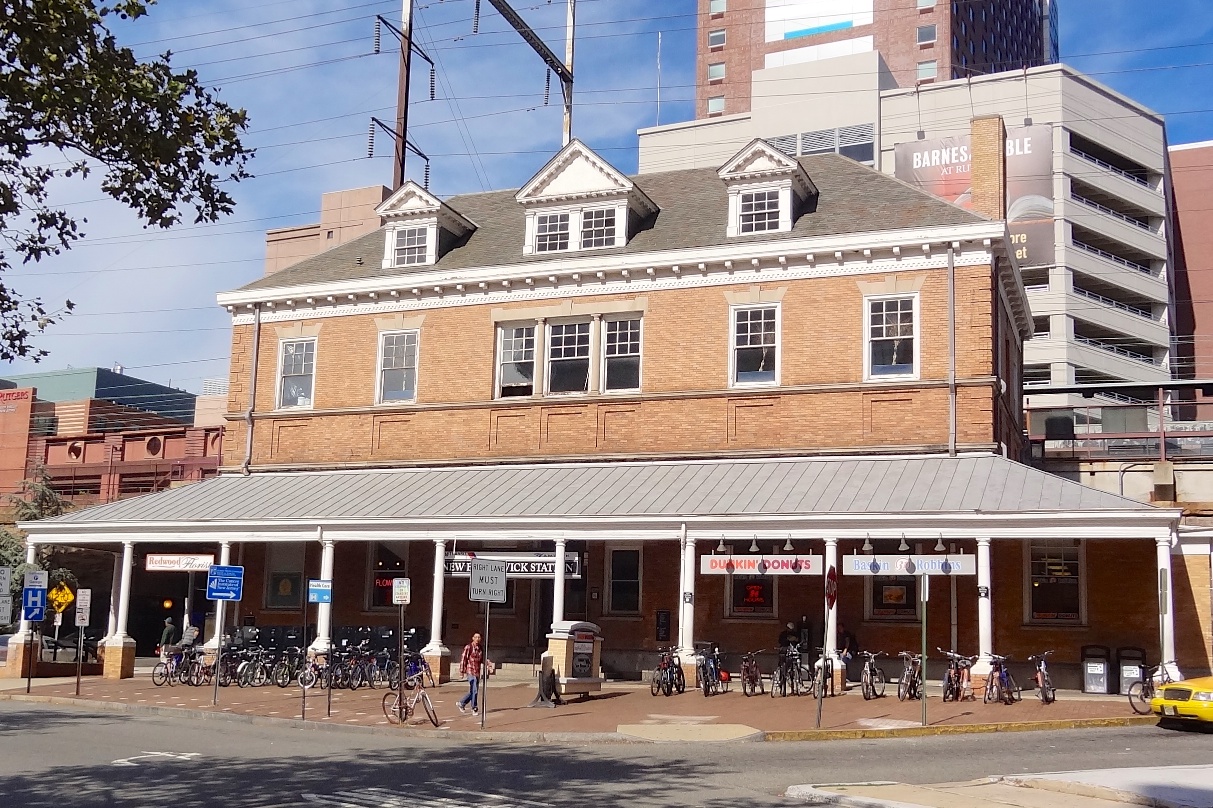 New Brunswick Station opened in 1903, but train service began in Brunswick began in 1838 with the arrival of the New Jersey Railroad line, and its existence as a transportation hub goes back even further as those with means deemed the city's geographic location worthy of investment. New Brunswick lies north of Trenton and Philadelphia, south of New York, and alongside the Raritan River -- the city first worked as a "river city." The Pennsylvania Railroad replaced the New Jersey line and eventually built the New Brunswick Station in 1903. Although the nature of travel and the names on the trains changed throughout the years, New Brunswick Station continues to operate as a railway station in the twenty-first century.

The nearby Raritan provided the people of New Brunswick a selling point that appealed mightily to those looking to invest in the shipping industry. By 1830, the New Brunswick shipyards moved almost one million bushels of grain through the city, which ended up in parts of the U.S. and abroad. Thus, as railways grew in popularity, railroad companies found New Brunswick to be an attractive location. But, the trains also spelled trouble for the town as other cities with train access competed with New Brunswick.

After the Civil War, the city again found success, but instead of shipping, the city benefited from the manufacturing industry. And although the city never attained the prominence it once enjoyed during the late eighteenth and early nineteenth centuries, The Colonial Revival New Brunswick Station arguably proved to be one of the more impressive stations among the lines serving Philadelphia, New York, and vicinity.

Typical of most train stations, its glory days faded during the twentieth century as air travel and the automobile grew increasingly dominant. From the 1950s through the 1970s, a series of updates helped keep the station up and running while serving commuter trains to the sizable eastern coast cities. But, a fire in 1980 nearly wiped out that station. Ironically, the near-disaster helped inspire officials to renovate the building in such a way that all the problems attached to the patchwork repairs and lack of updates during the previous decades were finally solved. Indeed, the building enjoyed a rebirth after the fire and transitioned into a commuter hub that served more than 3,000 people daily.

Today, the station remains busy, aided in part by nearby Rutgers University and the town's proximity to numerous metropolitan areas in the region. In 2019, approval was attained to renovate and modernize the building and railway platforms for a cost of $21 million, which speaks to its viability.

Just as New Brunswick transitioned from a river city to a rail city, and from shipping to manufacturing as its leading economic driver during the nineteenth century, the New Brunswick Station has remained functional by adapting. The station emerged at a time when railway transportation dominated the nation's social and economic climate, moving goods and people with great abundance. As the country moved to the automobile and air travel, many train stations and hubs across the country disappeared. But, New Brunswick Station found life primarily in commuter trains that served nearby cities, notably New York and Philadelphia, and Rutgers University, located in New Brunswick. As a result, in 2011, the United States Department of Transportation included the New Brunswick Station and the associated rail lines as part of its Next Generation High-Speed project that will allow for trains moving at 185 mph to serve the area.

Kafka-Holzschlag, Morris J. and Suzanne L. Gehlert. "New Brunswick and Transportation: A Brief Sketch of the History of Transportation and the Architecture of the Train Station." The Journal of the Rutgers University Libraries. 51 (2012). http://jrul.libraries.rutgers.edu/index.php/jrul/article/download/1684/3124