Coyote Canyon Mammoth Site is an active excavation site located in a quarry just a few miles southwest of Kennewick. In 1999, quarry workers found ancient mammoth bones on the western side of Coyote Canyon. Excavations, which began in 2008, revealed that the site dated to the Ice Age, which is also known as the Pleistocene Epoch. The site is managed by the Mid-Columbia Basin Old Natural Education Sciences (MCBONES ) Research Center. The site includes the Dig House (the research center), where excavated samples are cleaned, analyzed, and stored, and the dig site.

Excavations have been ongoing since 2008 at the Coyote Canyon Mammoth Site. Hundreds of specimens and bones have been found. 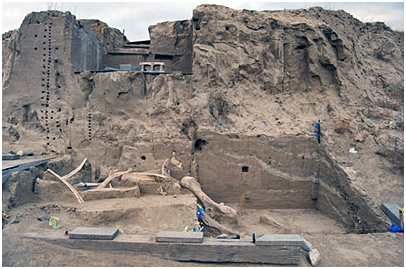 When the bones were found, quarry worked at the site stopped immediately and it was left alone. In 2007, the Central Washington University archaeology department studied the site. It had started excavating another mammoth site, the Wenas Creek Valley site, in 2005. It was believed that the Coyote Canyon site was similar. In 2008, the university and a group of local high school students discovered evidence of tooth enamel, which suggested that the site contained more mammoth remains. Through 2016, 700 specimens have been excavated, 97 of which are mammoth bones or bone fragments. Since the work began in 2008, the education of the general public about the site has been a key focus. Tours for groups and schools are offered from March through October.