The Battle of Middleburg

The battle of Middleburg was fought from June 17th to the 19th in 1863 in Middleburg, Virginia. The battle was fought between Union troops led by David McM. Gregg and troops from the Confederacy led by J.E.B. Stuart. The battle of Middleburg took place from June 17- June 19, 1863, as part of the Gettysburg Campaign during the American Civil War. In this battle, Confederate Major General J.E.B. Stuart’s cavalry fought with Union Major Generals Alfred Pleasanton's cavalry. On June 17th, Colonel Alfred Duffle’s 1st Rhode Island cavalry regiment was attacked by two Confederate Cavalry Brigades, taking huge casualties. On June 19, a brigade under the command of J. Irving Gregg advanced into Middleburg, pushing Stuart’s cavalry one mile beyond the town. While Stuart was gradually pushed out of Middleburg, where his headquarters were established, he fell back onto a second ridge, still being able to protect the advancing infantry of General Robert E. Lee

Historical marker for the battle 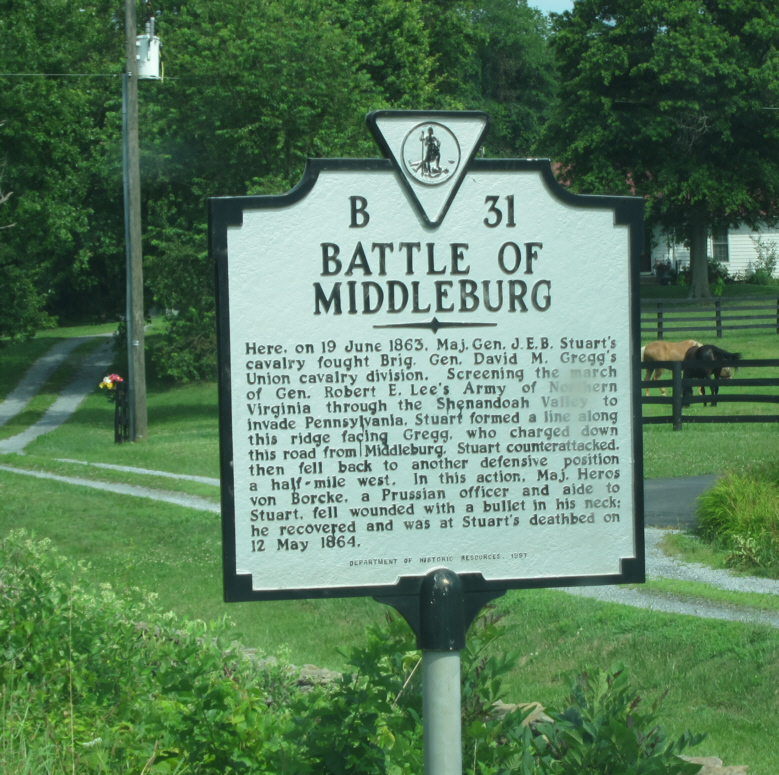 Map detailing troop movements during the Battle of Middleburg 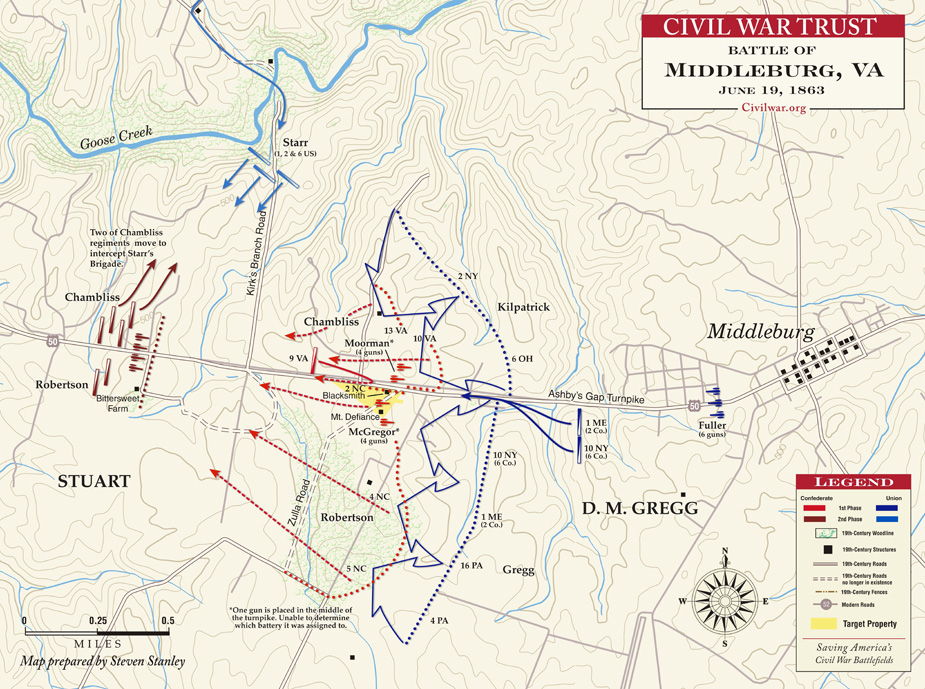 Sketch of Union troops during the battle 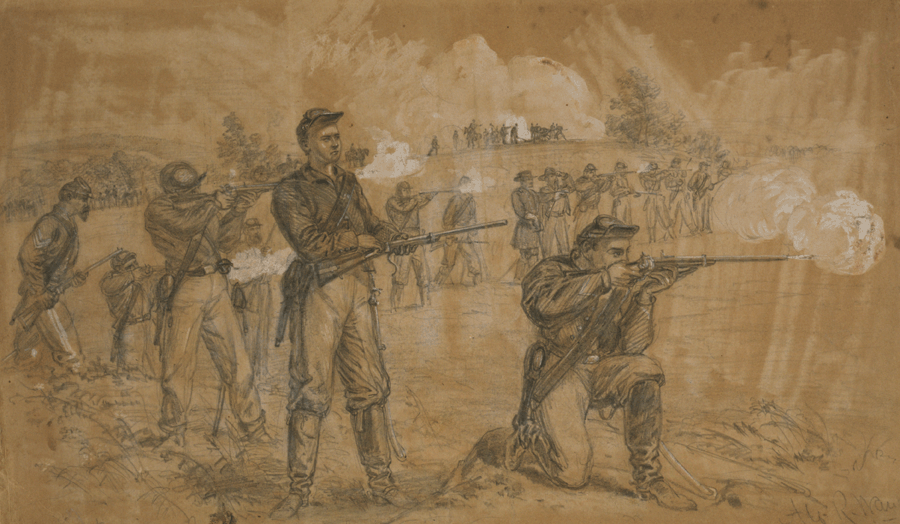 Colonel Alfred Duffle, a French-born officer, led his 280 men from the 1st Rhode Island Cavalry westward from their camp in Centerville on June 17th. As he traveled west with his men, he would easily take small Confederate defenses he encountered. Major General J.E.B. Stuart established a headquarters in Middleburg, Virginia and separated his brigades to look out for enemy troop activity. Soon they spotted the 1st Rhode Island Calvary led by Colonel Alfred N. Duffié camping near where the Confederates were situated. Despite seeing the small number Union troops were unescorted, the Confederates chose to not attack the unit, in fear that the unit was the precursor to a much larger force.

Fearing retaliation from a much larger enemy force, Confederate commanders did not aggressively attack, which allowed Duffle to be able to head to Middleburg where Stuart was located. Once he reached Middleburg, he led an attack that met resistance ordered from Stuart. At the end of the first skirmish, Colonel Duffle would return with only 31 men. On June 19th, Colonel J. Irving Gregg moved against Middleburg trying to take the high ground and push Stuart out. After receiving help from two other regiments, he was able to slowly push up hills on the attack. While the Confederate troops attempted to take back their high ground, the Union soldiers prevailed which led Major General Stuart to abandon his position in Middleburg and fall back into the Blue Ridge Mountains of the Shenandoah Valley.
Duffié finally encountered Confederate troops when his unit arrived in Middleburg, interrupting an "evening of socializing" between Stuart and some local women. Stuart and his staff immediately retreated to Rector's Crossroads, where his nearest brigade was. Stuart dispatched troops to crush the Union troops but found that Duffié had already stationed his troops behind stone walls. But all this did was delay the routing of the Rhode Island Cavalry, and by the next morning, most of Duffié's men were captured by the Confederates, though Duffié himself and some men were able to safely retreat back to Centreville, where the Army of the Potomac was located. After the battle, Union losses were reported as 16 killed, 46 wounded and 37 missing. Stuart lost around 40 men, including his Chief of Staff Heros von Borcke.