St. Agnes Hospital School of Nursing opened in 1910 to train sister nurses for work at St. Agnes Hospital and St. Anthony's Hospital in Hays, Kansas, both of which were operated by the the Sisters of St. Agnes. The school began enrolling lay students in 1917 to help fill the shortage of nurses resulting from World War I. A new School of Nursing building containing dorm rooms and classrooms was constructed in 1931. In the 1960s, the school merged into Marian College's nursing program. The building was repurposed for use as a college dorm and then as the CSA motherhouse when the convent at 390 E. Division Street was demolished. 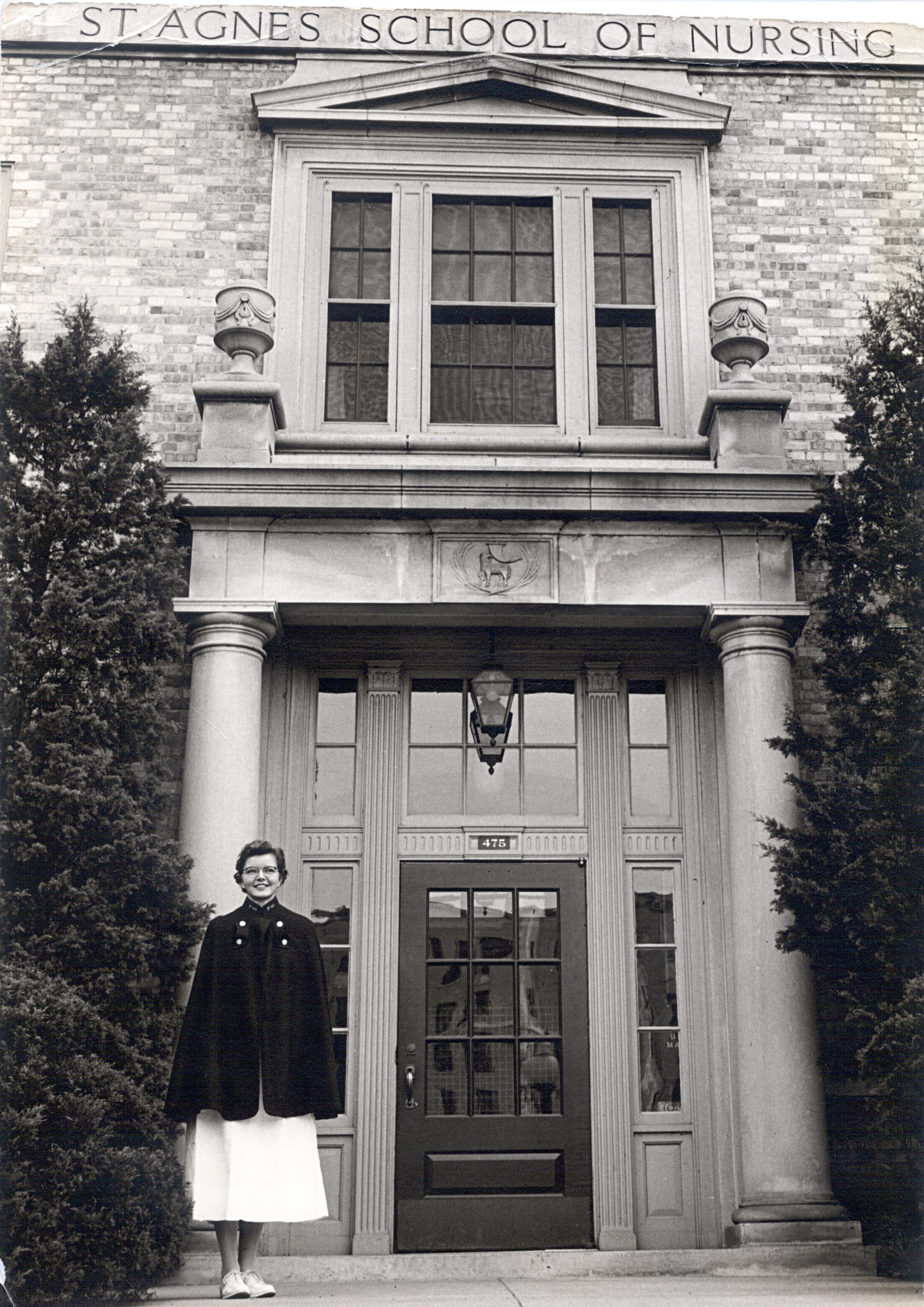 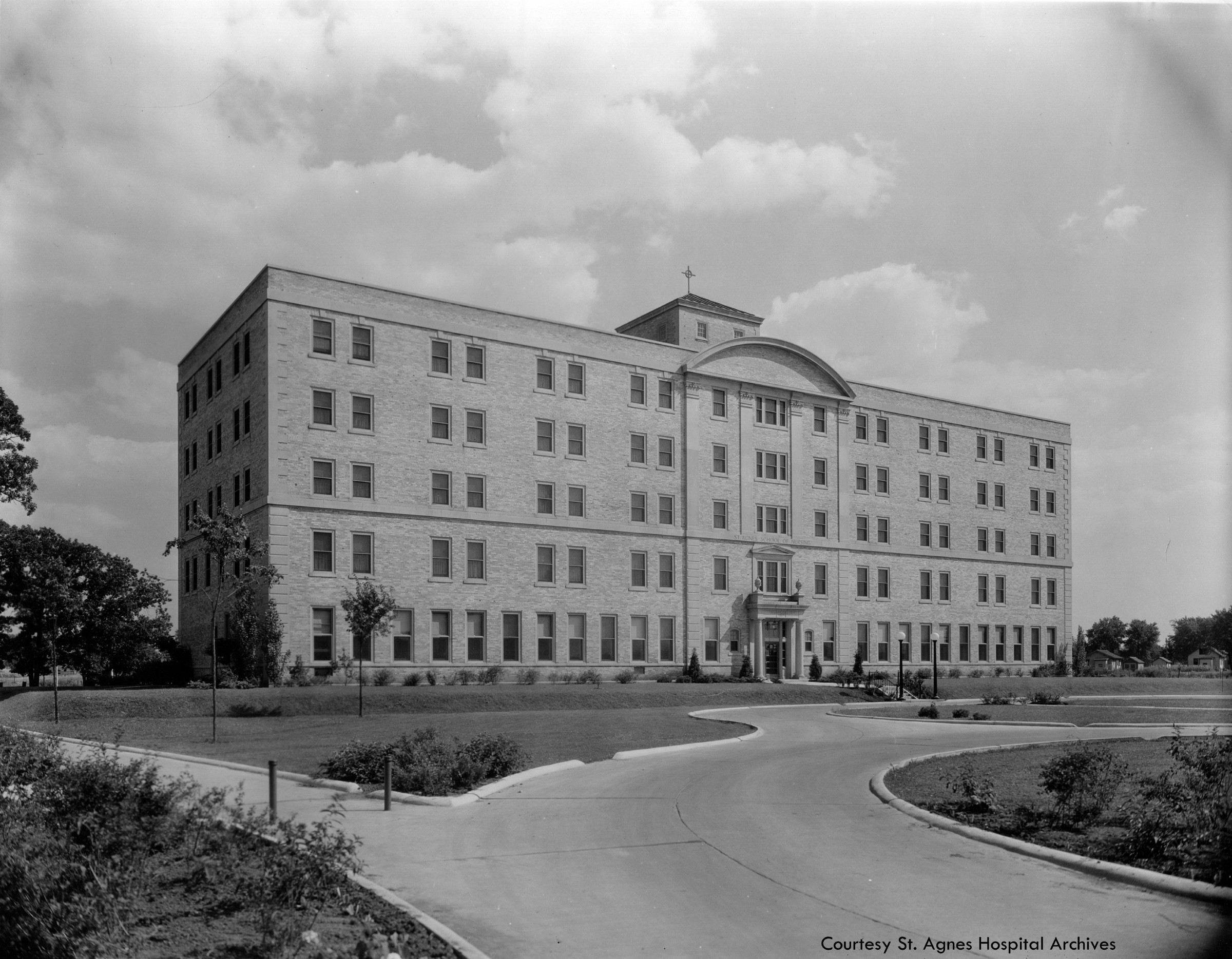 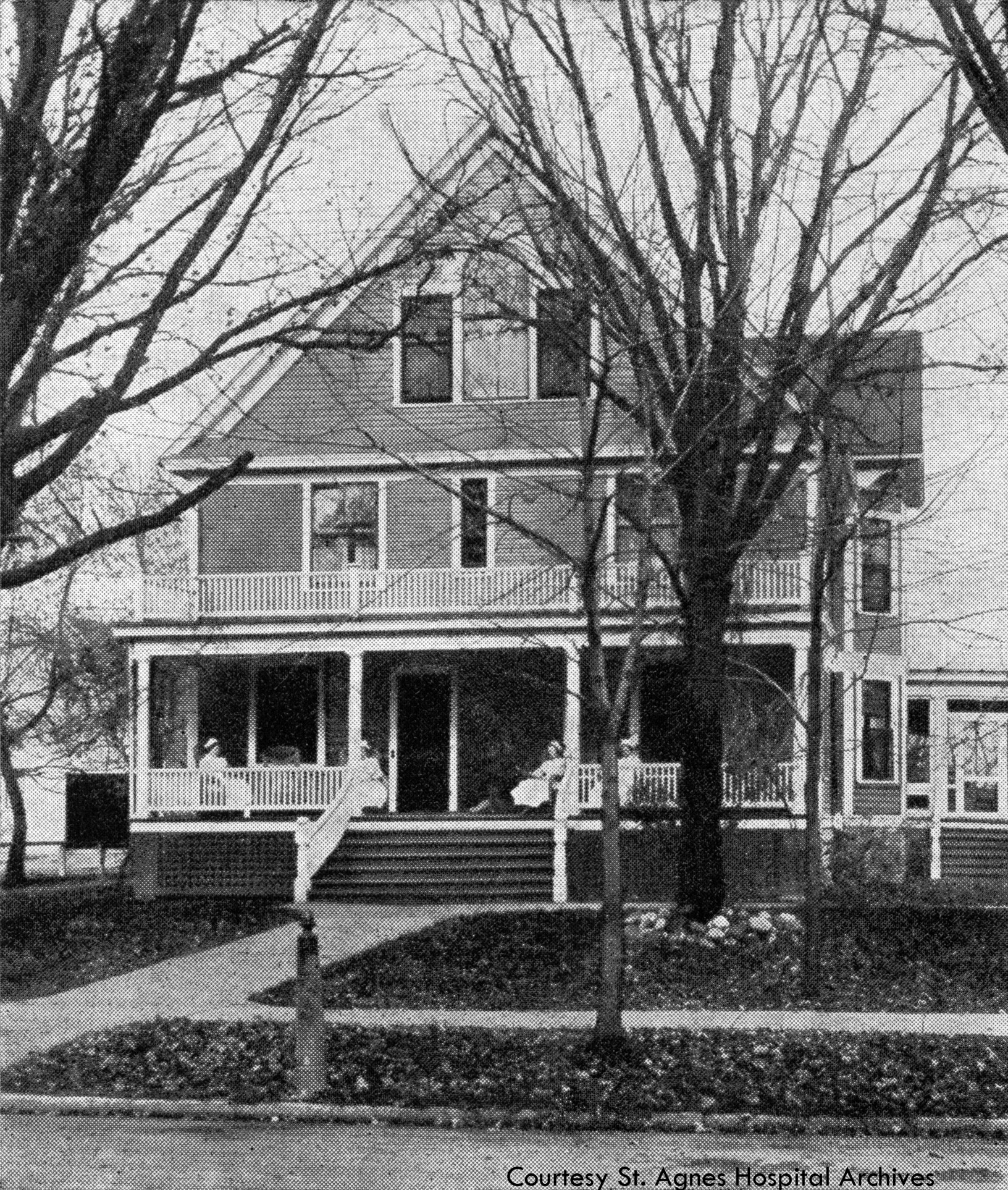 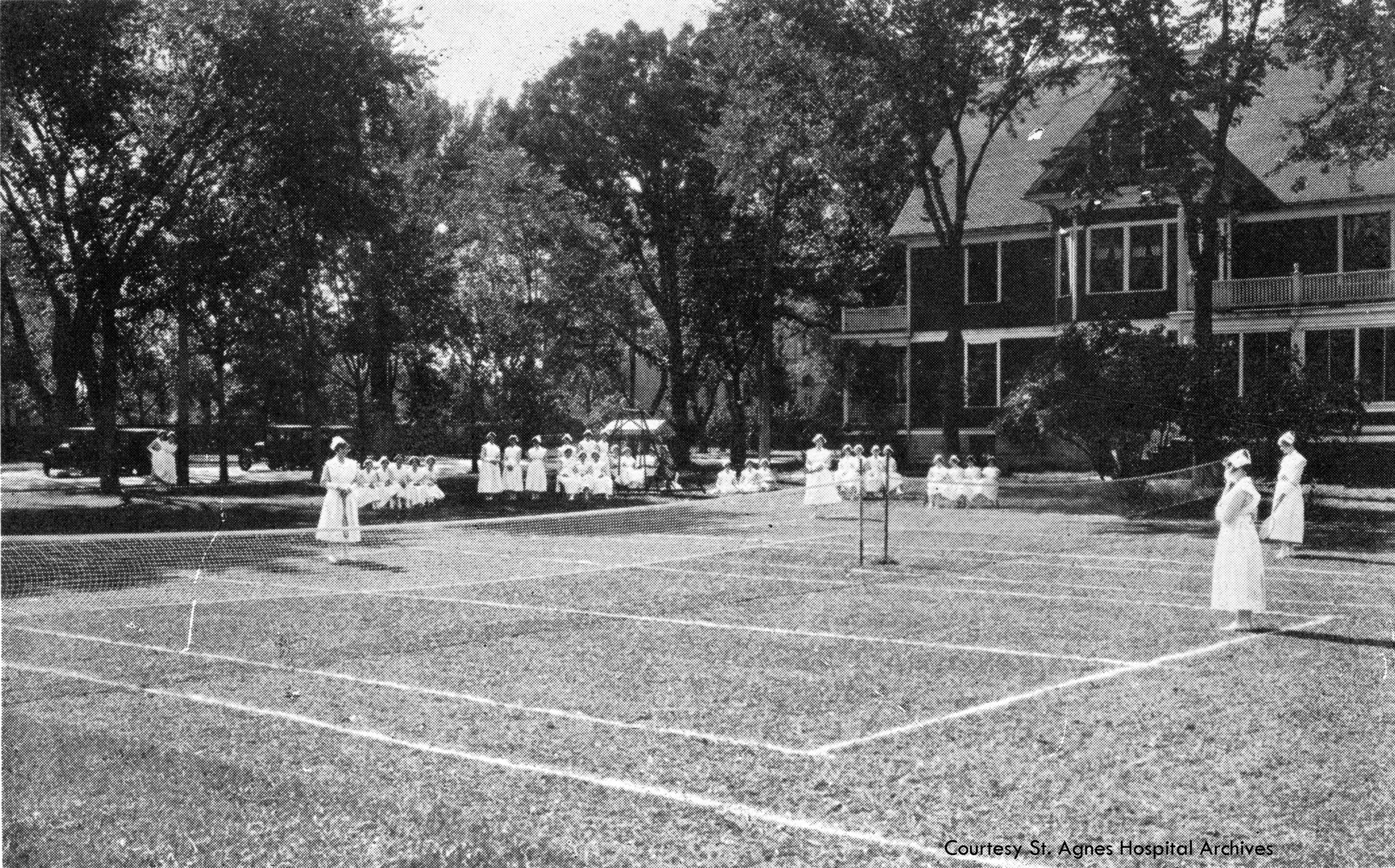 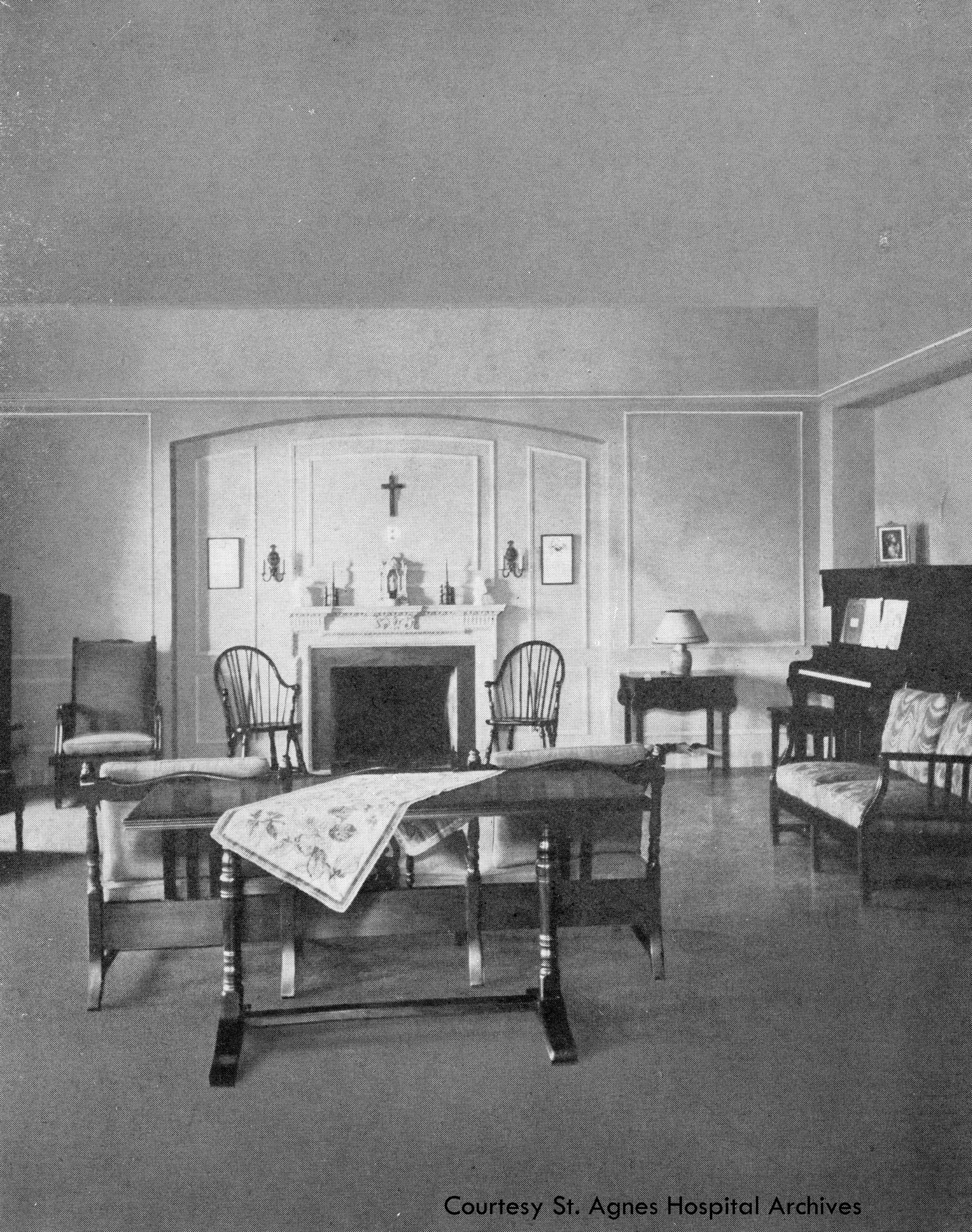 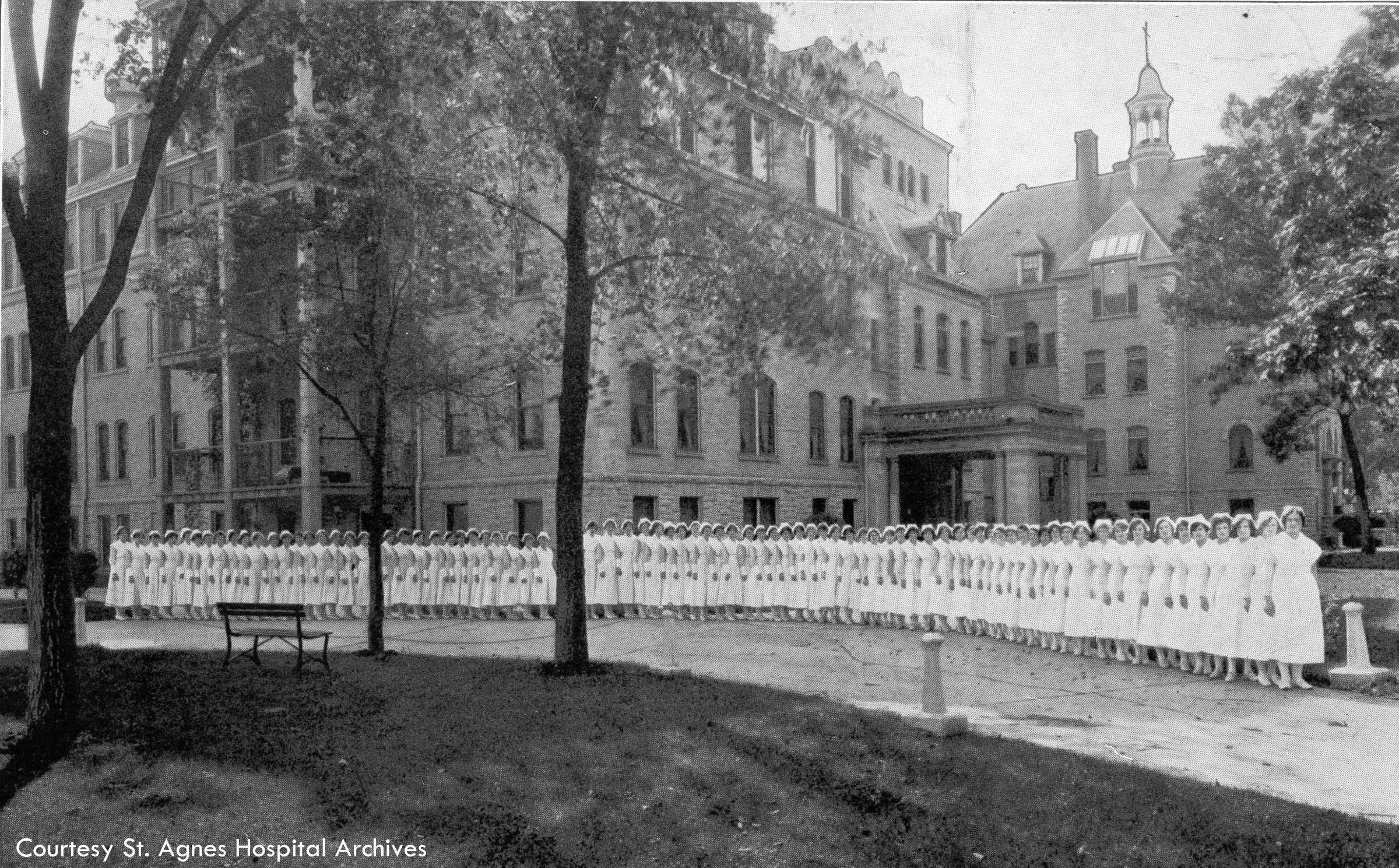 During construction of the new motherhouse at 475 Gillett St., Sisters Imogene Palen and John Baptist Shaja examine the chapel doors which came from the convent at 390 E. Division St., February 1975.

Section of the edifice of St. Agnes School of Nursing that is now part of a healing garden on the St. Agnes Hospital campus, 2020. 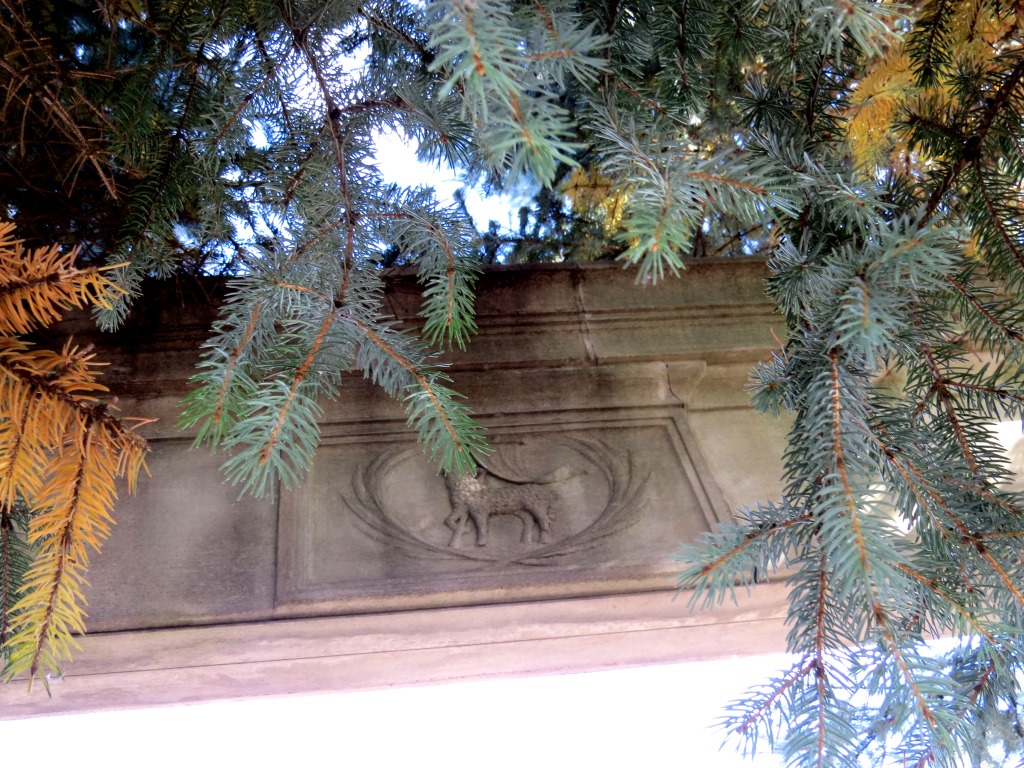 The Sisters of St. Agnes opened St. Agnes Hospital School of Nursing on October 3, 1910, in order to train sister nurses to staff St. Agnes Hospital in Fond du Lac and St. Anthony Hospital in Hays, Kansas. Lectures and instruction were conducted by three doctors and two sisters in the community room at the St. Agnes motherhouse. In 1912, the school was accredited by the Wisconsin State Board of Nurses.

During World War I, the shortage of nurses convinced the sisters to open up the school to lay students in 1917. Sister Digna Desch, director of SASN, embraced the new requirements for nursing schools mandated by the Wisconsin Board of Nursing Education in 1921, and under her leadership over 26 years the school earned a reputation of holding its students to the highest professional standards.

In 1931, a five-story brick building was constructed to house the School of Nursing. Dedicated in December of that year, the project cost between $200,000 and $250,000 to complete. The first two floors held classrooms, lounges, a library, and a combination gymnasium and auditorium. The other three floors had accommodations for 137 students.

During World War II, the School of Nursing took part in the Cadet Nurse Corps program which offered federal funding to nursing schools that accelerated their course of study to graduate more nurses. Between 1943 and 1948, St. Agnes School of Nursing graduated 240 cadet nurses.

By mid-century, nurses with bachelor’s degrees became more desirable and the School of Nursing began looking at ways to integrate their successful three-year diploma program with a college program. In 1964, nearby Marian College enrolled its first students in the Division of Nursing and in 1966, St. Agnes School of Nursing graduated its final class. The building, renamed St. Agnes Hall, was used for housing Marian students.

In 1975, when the decision was made to leave their longtime motherhouse at 390 E. Division Street, the Sisters of St. Agnes moved into St. Agnes Hall. Renovations included turning the first floor science laboratory into the chapel, and the gymnasium into the dining hall. The second floor held administrative offices and meeting rooms, while the third through fifth floors provided housing for the sisters.

St. Agnes Hall was used as the motherhouse until March 1999, when the administrative offices temporarily moved to the former Nazareth Heights building on Johnson Street while the congregation studied space needs and renovation costs for 475 Gillett. On December 27, 1999, CSA agreed to transfer the property to Agnesian HealthCare and the building was razed.